OUT OF MIND » TRUTH IN CONSPIRACY THEORIES? » HISTORIES MYSTERIES » Archaeologists May Have Found ‘Original Stonehenge’

Archaeologists May Have Found ‘Original Stonehenge’

A research team led by University College London archaeologists has discovered a 5,000-year-old dismantled stone circle in west Wales, close to Stonehenge’s bluestone quarries. The discovery, reported in a paper in the journal Antiquity, raises the possibility that a 900-year-old legend about Stonehenge being built from an earlier stone circle contains a grain of truth. 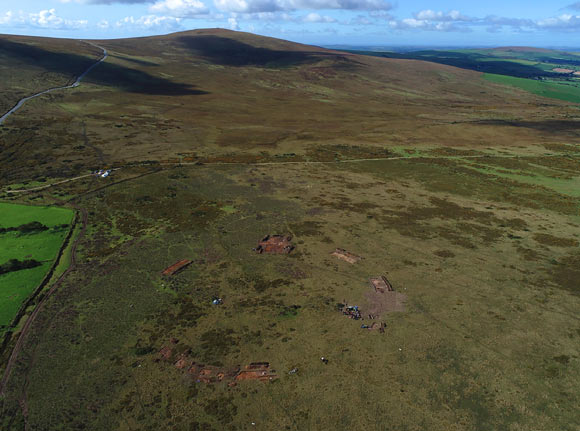 Waun Mawn during excavation in 2018, viewed from the north. The stone circle sits on the side of the hill Cnwc yr Hŷ (‘the hillock of the deer’) at 311 m (1,020 feet), with distant views of Ireland to the west and the mountains of Snowdonia to the north. Image credit: A. Stanford / Parker Pearson et al., doi: 10.15184/aqy.2020.239.
“In the oldest story of Stonehenge’s origins, the History of the Kings of Britain (circa 1136 CE), Geoffrey of Monmouth describes how the monument was built using stones from the Giants’ Dance stone circle in Ireland,” said Professor Mike Parker Pearson from the University College London’s Institute of Archaeology and colleagues.
“Located on legendary Mount Killaraus, the circle was dismantled by Merlin and shipped to Amesbury on Salisbury Plain by a force of 15,000 men, who had defeated the Irish and captured the stones.”
“According to the legend, Stonehenge was built to commemorate the death of Britons who were treacherously killed by Saxons during peace talks at Amesbury. Merlin wanted the stones of the Giants’ Dance for their magical, healing properties.”
“This 900-year-old legend is fantasy: the Saxons arrived not in prehistory, but only 700 years before Geoffrey’s own time, and none of Stonehenge’s stones came from Ireland,” they said.
“Yet the fact that Stonehenge’s bluestones derive from Wales — far to the west of Salisbury Plain — has led to speculation that there may be some truth in Geoffrey’s pseudo-history.”
“Moreover, at the time Geoffrey was writing, this region of south-west Wales was considered Irish territory.”
Stonehenge’s bluestones are already known to have come from the Preseli Hills of Wales and are thought to have been first erected 5,000 years ago, centuries before larger sarsen stones were brought from just 25 km (15.5 miles) away.
Professor Parker Pearson and co-authors discovered a dismantled stone circle (only four stones remain today) at Waun Mawn in west Wales.
At 110 m (361 feet) in diameter, this structure is the third largest of Britain’s great stone circles with diameters over 100 m (328 feet), after Avebury in Wiltshire and Stanton Drew in Somerset, and also one of the earliest.
The archaeologists also found empty stoneholes at Waun Mawn, confirming that the four remaining stones were part of a former circle.
Scientific dating of charcoal and sediments in the holes confirmed that it was put up around 3400 BCE.
Significantly too, both Waun Mawn and Stonehenge were aligned on the midsummer solstice sunrise.
One of the bluestones at Stonehenge has an unusual cross-section that matches one of the holes left at Waun Mawn. Chippings in that hole are of the same rock type as the Stonehenge stone.
In addition, the Waun Mawn circle’s diameter is the same as that of the ditch that encloses Stonehenge.
The archaeologists think that Stonehenge was built — partly or wholly — by Neolithic migrants from Wales, who brought their monument or monuments as a physical manifestation of their ancestral identities. 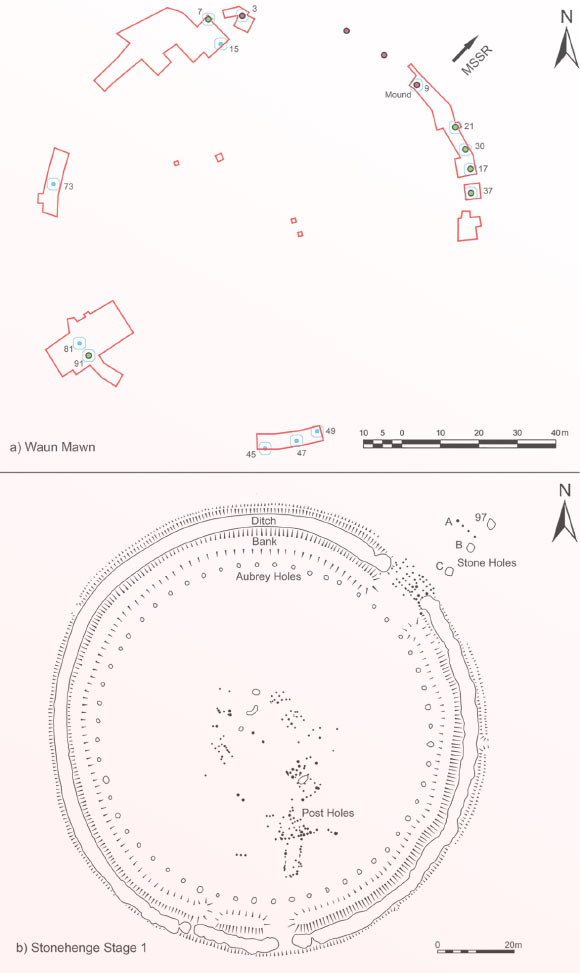 Waun Mawn (a): the excavation trenches (in red) showing the locations of the four remaining standing stones (in red and black), the additional stoneholes (in green and black) and other features (in blue); from the center of the circle, the midsummer solstice Sun rose within the entrance formed by stoneholes 9 and 21. Stonehenge stage one (b), beginning in 3080-2950 BCE and ending in 2865-2755 BCE; Stonehenge’s enclosing ditch and bank were constructed in 2995-2900 BCE. Image credit: K. Welham & I. de Luis / Parker Pearson et al., doi: 10.15184/aqy.2020.239.
“Is Waun Mawn the Giants’ Dance described by Geoffrey of Monmouth? Might there be any truth to the legend? Archaeology and myth make awkward companions, and we must reject the details of Geoffrey’s story concerning the appropriation of the stones,” they said.
“The shared diameters of Waun Mawn and Stonehenge’s enclosing ditch, as well as their midsummer solstice sunrise orientations, suggest that key aspects of the circle’s architecture were brought by the people of west Wales to Salisbury Plain, to be both transformed and reinstated, rather than taken by force as a trophy by a Neolithic Merlin and his army.”
Recent isotopic analysis of people buried at Stonehenge when the bluestones are thought to have arrived reveals that the first people to be buried there came from western Britain, very possibly west Wales.
Some 43 bluestones survive today at Stonehenge, although many of these are today buried beneath the grass.
“With an estimated 80 bluestones put up on Salisbury Plain at Stonehenge and nearby Bluestonehenge, my guess is that Waun Mawn was not the only stone circle that contributed to Stonehenge,” Professor Parker Pearson said.
“Maybe there are more in Preseli waiting to be found. Who knows? Someone might be lucky enough to find them.”
_____
Mike Parker Pearson et al. 2021. The original Stonehenge? A dismantled stone circle in the Preseli Hills of west Wales. Antiquity 95 (379); doi: 10.15184/aqy.2020.239

OUT OF MIND » TRUTH IN CONSPIRACY THEORIES? » HISTORIES MYSTERIES » Archaeologists May Have Found ‘Original Stonehenge’