OUT OF MIND » THE INSANITY OF REALITY » GOVERNMENTS & THE NEW WORLD ORDER » IDIOCRACY: Brazilian President Jair Bolsonaro’s Aide is Under Investigation for Flashing ‘OK’ Symbol 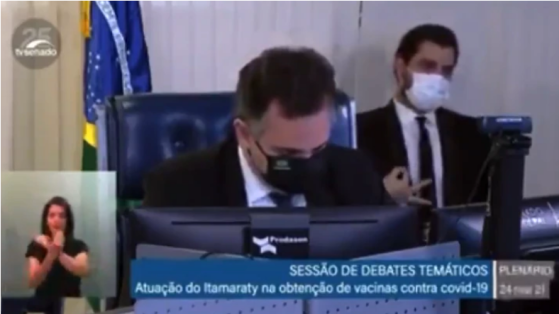 Source: Shane Trejo
An aide to Brazilian President Jair Bolsonaro is under investigation for flashing the ‘OK’ symbol, which has been called a hate symbol by neurotic and emotionally-unstable leftists, during a recent legislative hearing.
Filipe Martins, President Bolsonaro’s special adviser for international affairs, has been referred to Brazilian law enforcement for this heinous offense:

Martins explained in a Twitter post that he is Jewish, and therefore cannot be a white supremacist by definition.
“A warning to clowns who wish to support the thesis that I, a Jew, am sympathetic to ‘white supremacism’,” he wrote.
“In their sick minds they saw an authoritarian gesture in an image that shows me adjusting the lapel of my suit: they will be prosecuted and held responsible; one by one,” Martins added.
Big League Politics has reported on how the far-left Anti-Defamation League (ADL) has led a worldwide thought-control campaign against the ‘OK’ symbol:
“A Hispanic man targeted by a digital lynch mob as a white supremacist for flashing the “OK symbol” is pushing back against the left-wing insanity, claiming that he was only cracking his knuckles.
Emmanuel Cafferty was fired from his job at San Diego Gas and Electric (SDG&E) because he allegedly flashed the “OK symbol” near a Black Lives Matter rally. A Soviet-style snitch took a picture of his hand gesture and put it on social media, which activated the mob of soulless jackals who harassed his business and got him terminated from his place of employment.
“It’s scary that you can be charged, tried and convicted on social media, without your permission, with no corroborating evidence, of any type,” Cafferty said.
Even the Twitter user who started the hate campaign against Cafferty admits that they may have jumped the gun, and never intended to get the man fired. However, this is another lesson that the left-wing mob wants you doxxed, terrorized, and unable to put food on your family’s plate if you perform any behavior, no matter how innocuous it may be, that offends their delicate sensibilities.
Cafferty hopes to clear his name and get his job back after being defamed on social media.
“I don’t know how long it’s going to take me to get over this, but to lose your dream job for playing with your fingers, that’s a hard pill to swallow,” he said.
However, SDG&E is refusing to budge and apparently will not own up to their mistake and extreme cowardice for bowing to the mob.
“We conducted a good faith and thorough investigation that included gathering relevant information and multiple interviews, and took appropriate action,” the company said in a statement to NBC 7, adding that they hold their employees “to a high standard and expect them to live up to our values every day.”
This hysteria has been fomented by the Anti-Defamation League (ADL), an anti-Bill of Rights left-wing thought control group. They have released relentless propaganda telling their minions to be on the lookout for the “OK symbol” and destroy the lives of any person who flashes it.”
The tidal wave of stupidity will destroy civilization as we know it if the Left is not figuratively crushed on a global scale. Bolsonaro’s administration is off to a good start in that regard.

OUT OF MIND » THE INSANITY OF REALITY » GOVERNMENTS & THE NEW WORLD ORDER » IDIOCRACY: Brazilian President Jair Bolsonaro’s Aide is Under Investigation for Flashing ‘OK’ Symbol