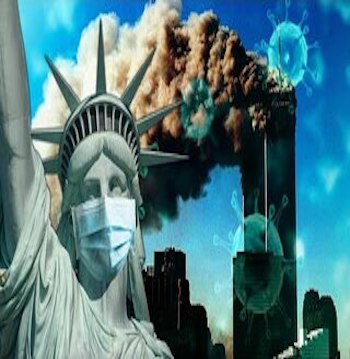 So, the New Normals are discussing the Unvaccinated Question. What is to be done with us? No, not those who haven’t been “vaccinated” yet. Us. The “Covidiots.” The “Covid deniers.” The “science deniers.” The “reality deniers.” Those who refuse to get “vaccinated,” ever.
There is no place for us in New Normal society. The New Normals know this and so do we. To them, we are a suspicious, alien tribe of people. We do not share their ideological beliefs. We do not perform their loyalty rituals, or we do so only grudgingly, because they force us to do so.
We traffic in arcane “conspiracy theories,” like “pre-March-2020 science,” “natural herd immunity,” “population-adjusted death rates,” “Sweden,” “Florida,” and other heresies.
They do not trust us. We are strangers among them. They suspect we feel superior to them. They believe we are conspiring against them, that we want to deceive them, confuse them, cheat them, pervert their culture, abuse their children, contaminate their precious bodily fluids, and perpetrate God knows what other horrors.
So they are discussing the need to segregate us, how to segregate us, when to segregate us, in order to protect society from us. In their eyes, we are no more than criminals, or, worse, a plague, an infestation.
In the words of someone (I can’t quite recall who), “getting rid of the Unvaccinated is not a question of ideology. It is a question of cleanliness,” or something like that. (I’ll have to hunt down and fact-check that quote. I might have taken it out of context.)
In Israel, Estonia, Denmark, Germany, the USA, and other New Normal countries, they have already begun the segregation process.
In the UK, it’s just a matter of time. The WEF, WHO, EU, and other transnational entities are helping to streamline the new segregation system, which, according to the WEF,

will need to be harmonized by a normative body, such as the WHO, to ensure that is ethical.”