Sorry this post is late … I was so exhausted last night that I thought I had put it on the schedule for 3:00 a.m., but turns out it was still in draft!

Wesley Hamilton was only 24 years old when two bullets paralyzed him from the waist down.  On January 14, 2012, Hamilton got caught up in an altercation with a stranger outside an apartment complex. The man shot Hamilton twice in his abdomen.  When the bullets pierced his body, he thought he was going to die.
“I laid on that ground taking my last breaths, having regrets about life, because it wasn’t until that moment that I realized I had never lived.”
Hamilton survived, suffering a spinal cord injury that left him paralyzed from the waist down. At 24, he became “a single father in a wheelchair,” he said — adjusting to a new life faced with new challenges.
“I felt hopeless and useless.  It defeated me.”
A year later, Hamilton was diagnosed with a pressure ulcer on his tailbone from the extended hours of sitting. He underwent six surgeries and spent the next two years confined to bed rest.
In the years following his injury, Hamilton said he became dangerously overweight, depressed and suicidal.
It was his daughter, Navaeh, who ultimately became his lifeline.
“I was determined to be a better person and a better father. My love for her is greater than she’ll ever know. And that love inspired me to … take control of my life.”

He enrolled in community college and took a nutrition course. He started a healthy eating regimen and took up weightlifting. He lost 100 pounds within a year.
For Hamilton, it was only the beginning. He became an award-winning adaptive athlete and eventually a certified adaptive CrossFit instructor. Through his journey, Hamilton realized he wanted to help other people with disabilities regain their livelihood.
Since 2017, his non-profit, Disabled But Not Really, has empowered dozens of people through adaptive physical training and nutrition coaching — helping them take their health back into their own hands and rise above their limitations. 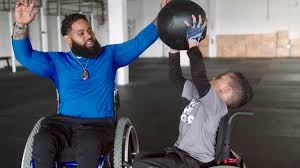 Hamilton developed an eight-week fitness program, and before the pandemic hit, participants would meet for one-hour group sessions twice a week as well as nutrition seminars.
When group classes were suspended because of Covid-19, Hamilton said he was committed to continuing to serve and support his program participants through private training sessions.
“People deserve to know they are more than their circumstances. My purpose is to inspire. And it’s to show people what happiness really looks like despite the adversity that you have to face.”
Mr. Hamilton was recently interviewed by CNN’s Laura Klairmont … what follows is a portion of that interview:
CNN: How has your organization pivoted programming in response to the pandemic and what are your future plans?
Wesley Hamilton: Just like so many other organizations, we had to change our whole way that we create an impact. (We) also want to make sure that everybody is safe during these uncertain times.
We understood the lack of access to fitness centers. So, I made my garage into a gym. I host a 12-week program that is personal training two days a week, as well as nutritional information seminars that we provide to help those athletes become a better version of themselves and have an overall better quality of life.
I believe our work is very important right now during Covid, because we are targeting a community of people that are at high-risk of so many things that our organization provides information and education for — fitness and nutrition.
With all of these changes happening, we want to continually be innovative. We want to go out to the community. We’re launching a mobile trailer gym. It’s our way of really making sure that everybody gets the same access. And our end goal is our own fitness center for people with disabilities.
CNN: What are some of the everyday obstacles that people with disabilities face?
Hamilton: One thing that’s not talked about a lot is why people with disabilities aren’t really seen in society. The disabled community is very isolated because of the lack of accessibility we have to face in any facility or business — grocery stores to gyms, stairs to elevators, car issues. The world is … just not really built for accessibility.
It breaks you. It brings you down on a level that you don’t feel accepted in a world that is supposed to accept everybody. More people will feel comfortable at home than trying to go out into a world that makes you very, very uncomfortable. (And) you have to deal with the way people look at you, and that’s debilitating in itself.
Most of the time I didn’t want to get out until I realized that I had to to raise awareness for what was needing to be changed. Ninety percent of my day, I face obstacles. Facilities should be mindful enough to make sure that they have a universal design that speaks to everybody. Systems that are in place actually need to be rewritten. No one should feel alienated. It’s the reason why I felt the need to create my organization. Innovation has to start somewhere. And certain facilities just need to see you there. Once you start to create that and bring people around that are different, we start to think of ideas to make everyone be accepted in one place.
CNN: You’re not only helping those you work with get physically fit. How do you support them on a deeper level?
Hamilton: My main goal is to teach people how to take control of their life — take full accountability and embrace your reality despite the circumstances that you face. When we go through our program, it’s only the beginning. I want to be there through your whole journey because I want to see you successful. Even though our training looks just like normal gym strength and conditioning, it’s really reshaping the things that you can do in life.
We make sure that we are attacking the mindset as well as tackling the physical aspect of the person we’re helping. Allowing them to be vulnerable, to talk about their challenges, allows us to help them, and it gives them peace and makes their day more successful.
I’m bringing people of all sorts together to be empowered by one another. It’s a community of people that are different, but together we are the same. I believe that people everywhere that are differently abled should experience that.
Mr. Hamilton is living proof that being confined to a wheelchair doesn’t have to mean the end of life, but in fact can be a new beginning.  How many people has he helped to find out who they are, to learn to live a full life despite their disabilities?  Perhaps we’ll never know, but more than a few I’d be willing to bet.  This is truly a case of turning adversity into strength … and helping others do the same.