BREAKING: Dr. Fauci admits COVID vaccine may not be safe

BREAKING: Dr. Fauci admits COVID vaccine may not be safe 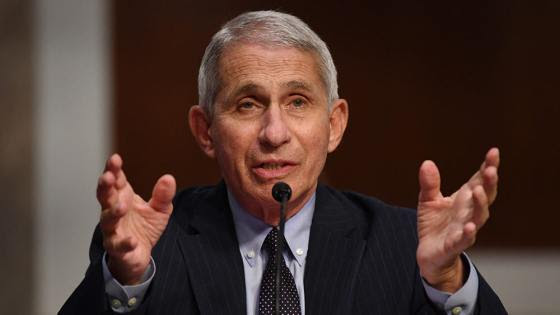 In an interview on Meet The Press, Dr. Anthony Fauci, who has hyped the Coronavirus vaccine since day one, just admitted the COVID vaccines he hyped as a way to save lives may not actually be safe. In a live interview with Chuck Todd, the New York Post reports that the epidemiologist blatantly stated that the country needed to “make sure” the vaccine truly is safe before we give it to children and maybe pregnant women, whom Fauci said are generally “vulnerable” to vaccines.
(Article by John Paluska republished from TheWashingtonGazette.com)
The New York Post cites him as saying:

The reason is traditionally when you have a situation like a new vaccine, you want to make sure, because children as well as pregnant women, are vulnerable, so, before you put it into the children, you’re going to want to make sure you have a degree of efficacy and safety that is established in an adult population, particularly an adult, normal population.

It is for this reason the new vaccine is going to be tested on “hundreds to a couple of thousands” of children, the New York Post reports him saying.
So, in short, we don’t know if this vaccine is safe, but we’re going to pump it into children anyways.

But what is particularly striking about his statements are when he said we needed to be certain of the vaccine’s safety in a “normal” population. For those of you who are scientifically-minded or work in the field of vaccine testing or statistics, you likely know this means a population that represents the general public.
It is worth knowing that no vaccine ever had a “normal” population in any of the tests. Moderna’s own trials tell us this:

The demographics of the U.S. are ACTUALLY as follows: 50.8% are women, 49.2% are male, 55% are between 18 and 64 years of age, 16.5% are 65 and older, 18.5% are Hispanic or Latino, 76.3% are White, 13.4% are African American, 5.4% are Asian, 1.3% are American Indian or Alaska Native, 2.8% are multiracial.
So, old people were drastically over-represented, and African Americans, Asians, and women were underrepresented. Additionally, Hispanics and Latinos were over-represented, while white people were also over-represented. This is hardly a “normal” population.
However, we don’t even know the preexisting conditions of the sample group and whether that also followed the “normal” population. Moderna doesn’t tell us any of this. But not even factoring in the health of the participants, just based on this one sample size we can already see, it becomes clear this test group doesn’t align with a “normal” population.
According to Dr. Fauci’s recent statements, you only know a vaccine is safe when it hits a “normal” population. So, if we take his statements at face value, there’s no way anyone could have said this vaccine was safe because the trials didn’t consist of a normal population.

Further, in Pfizer’s test, they blatantly state it was only performed on “healthy individuals.” We already know from their own study report on page 41 of the PDF that they did not include people with certain STDs. Additionally, they outline the criteria for being barred from the test on page 145 of the report. But, you know, these “healthy people” somehow are representative of the “normal” public and the FDA approved this vaccine for emergency use despite these shortcomings in the trial.
So yeah, we knew this vaccine was potentially unsafe, and we know it’s also potentially unsafe for children and maybe even pregnant women, but the government still authorized it on the general public and now they’re trying to authorize it on children. But it doesn’t even end there. . .
Dr. Fauci also stated in a White House briefing, according to the New York Post:

If you can show that it’s safe and that in fact it induces the kind of response that is reflective of the protection — mainly the correlate of immunity — what you can do is bridge that to the efficacy data that you got from the 30,000[-person] trial with Moderna and the 44,000[-person] trial that we did with Pfizer.

“If you can show that it’s safe.” I thought is was safe, Dr. Fauci. I thought the vaccine was safe and effective and that anyone who disagreed was a “conspiracy theorist.” The fact of the matter is, you probably don’t know if it’s safe for children, just like you probably didn’t know if it was safe for adults. That’s likely why the FDA never actually approved the vaccine but only approve its emergency use and why you said we need to test it on a “normal” population to see if it’s safe or not.
News Editors
Read more at: TheWashingtonGazette.com and Vaccines.news.