Drinking beetroot juice, which is rich in inorganic nitrate, promotes communities of oral bacteria associated with healthier blood vessels and brain function, according to new research led by the University of Exeter. 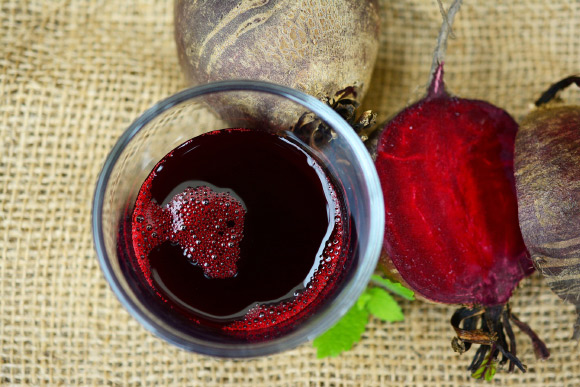 Vanhatalo et al. applied a systems-level bacterial co-occurrence network analysis across 10-day dietary nitrate and placebo interventions to test the stability of relationships between physiological and cognitive traits and clusters of co-occurring oral bacteria in older people. Image credit: Conger Design.
Many oral bacteria play a role in turning inorganic nitrate, a natural part of a vegetable-rich diet, to nitrite that acts as a precursor to nitric oxide, a regulator of vascular tone and neurotransmission.
Aging is hallmarked by reduced nitric oxide production with associated detriments to cardiovascular and cognitive function.
“We are really excited about our findings, which have important implications for healthy aging,” said Professor Anni Vanhatalo, a researcher at the College of Life and Environmental Sciences at the University of Exeter.
“Previous studies have compared the oral bacteria of young and older people, and healthy people compared to those with diseases, but ours is the first to test nitrate-rich diet in this way.”
“Our findings suggest that adding nitrate-rich foods to the diet — in this case via beetroot juice — for just ten days can substantially alter the oral microbiome for the better.”
In the study, Professor Vanhatalo and her colleagues from the University of Exeter, Cardiff University and the University of Stavanger surveyed the oral bacterial communities in saliva samples of 30 older people following 10 days of dietary inorganic nitrate (nitrate-rich beetroot juice) and placebo (nitrate-free beetroot juice) supplementation.
The results showed higher levels of bacteria associated with good vascular and cognitive health, and lower levels of bacteria linked to disease and inflammation.
“Relative abundances of Proteobacteria increased, while Bacteroidetes, Firmicutes and Fusobacteria decreased after nitrate supplementation,” the researchers said.
“Two distinct microbiome modules of co-occurring bacteria, that were sensitive to nitrate supplementation, showed stable relationships with cardiovascular (Rothia-Streptococcus) and cognitive (Neisseria-Haemophilus) indices of health across both dietary conditions.”
“A microbiome module (Prevotella-Veillonella) that has been associated with pro-inflammatory metabolism was diminished after nitrate supplementation, including a decrease in relative abundance of pathogenic Clostridium difficile.”
Systolic blood pressure dropped in participants on average by five points (mmHg) after drinking the beetroot juice.
“More research is needed to confirm the findings and see whether similar effects are found in other groups,” Professor Vanhatalo said.
“Our participants were healthy, active older people with generally good blood pressure.”
“Dietary nitrate reduced their blood pressure on average, and we are keen to find out whether the same would happen in other age groups and among people in poorer health.”
The results were published in the journal Redox Biology.
_____
Anni Vanhatalo et al. 2021. Network analysis of nitrate-sensitive oral microbiome reveals interactions with cognitive function and cardiovascular health across dietary interventions. Redox Biology 41: 101933; doi: 10.1016/j.redox.2021.101933