Laura: Looks like a wooden plank drifted at the beach right? Wrong ! This is on Mars


December 7, 2012 – Someone at NASA released a photo that they shouldn’t have, a picture of a piece
of timber the size of a railroad tie, a photo that could get someone
killed. There is no mistaking that the object in the print below is a
piece of wood. NASA claims that Mars
is a desert planet with no life at all. NASA lies, repeatedly.Where
would a piece of timber this size come from? There are vast forests on
Mars, ones that are kept from the public. This piece of wood looks like
it floated to its present location, being partially sunk in the soil.
The ground around it is very interesting. Notice the flat rock formation
of the soil and the crevices in between them. Does this look familiar?
It appears to be the bed of a dried up pond. There had to be a
significant amount of water in this area, water high enough to lift that
railroad tie sized piece of timber and float is perhaps several miles.
The Mars Reconnaissance Orbiter showed that vast regions of the Red
Planet have been altered by floods. This dried pond effect should come
as no surprise.This flood had to have
happened within the past thirty or forty years because the wood is
intact, though this is judging the rate of decay by Earth standards.
Some may say that Mars did have water on it long ago and that it even
had an atmosphere, which is true, but a piece of timber isn’t going to
survive for thousands of years.
Both of the Viking Orbiters filmed vast forests on Mars, though no
subsequent probe to the Red Planet has shot a single frame of film
showing a tree. This was by design. The Viking photographs show more
than just a few trees but rather thousands upon thousand of them. These
trees appear to be much larger than Earth trees, having a leaf and
branch system that is unique to Mars. The foliage spans much wider than a
similar plants on Earth do, rising to who knows what heights. The
spacing between them could be the result of the dying Martian
atmosphere. Dense forests more than likely filled large areas of Mars
back in the days when it had a breathable environment. There were
undoubtedly several species of trees, and different varieties of
underbrush, which are now extinct.

NASA can keep telling its lies but the photos have slipped out and
what a story they tell. NASA thought that the Opportunity Rover took a
picture of the area in front of it, but did they honestly expect us to
forget about the railroad sized piece of timber in the foreground? It’s
time for NASA to come clean with the public. It’s time that they land
one of those rovers in Cydonia, the Inca city, or in one of forests.

The high resolution picture, which this have come from is at:

Guest
Herb Lady, I have a copy of the photo they're talking about, with trees on mars. I can't figure out how to load it onto the forum. If anyone wants to help, let me know.

Just call me The Flake

Guest
HL, I shared the image to Purp's Facebook page and asked her to post it for you. It's really interesting and mystical or I would not have bothered everyone.

I will try a few things and hope I can figure it out.

Guest
Well this little experiment has presented quite the conundrum despite the best efforts of Skyz and me. Since we cannot seem to post my photo, I went to google images and searched "trees on mars." Lo, and beholden to no one, there are dozens of photos stored there. Help yourself, feast your eyes, and be prepared to shift your consciousnesses.

Trees found on Mars' Surface - NASA Photos
A NASA probe has sent back photographs of what appears to be trees on the planet's surface.

The images appear to show rows of dark "conifers" sprouting from dunes and hills on the planet surface. But the scene is actually an optical illusion.

The photographs actually show sand dunes coated with a thin layer of frozen carbon dioxide, or dry ice, less than 240 miles from the planet's north pole.

The "trees" are really trails of debris caused by landslides as ice melts in Mars's spring. You can even see a cloud of dust, just to the left of centre of the picture, where an avalanche is caught happening.

The photograph was taken from orbit around Mars by HiRISE, the most powerful camera sent to another planet.

NASA's Candy Hansen told The Sun: "The streaks are sand, dislodged as ice evaporates, which slide down the dune. At this time of the Martian year the whole scene is covered by CO2 frost."

Last month Nasa announced a new telescope had detected five planets outside the solar system. The observatory, which was launched last year to find other Earths, made the discoveries in its first few weeks of science operations.

Although the new worlds, called exoplanets, are all bigger than Neptune, Nasa said their discovery showed that the planet hunting telescope was working well.

So what is NASA's official cover-up alibi? The scene is an optical illusion, and the "trees" are actually just trails of debris caused by landslides as the ice melts...That is by far the stupidest idea of a cover up explanation I've heard yet from NASA.

Let's take a look at this photo a little more closely: 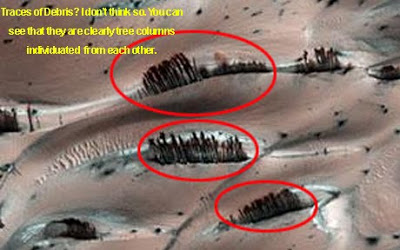 NASA, your images and data is great, but from where I'm sitting, no one has any interest in your theories or speculation that you bring forward. The people are much smarter than you take credit for and we can see through such weakly fabricated hypotheses. So are these trees on Mars? There is no doubt in my mind that that is what we are seeing here.

You'll also see through this video below a double confirmation in regards to vegetation on Mars as well as several other phenomena that NASA has not revealed to the public:

Guest
Yo, Ponee! That's the photo. You rock!

Admin
Posts : 108387
Join date : 2012-01-04
Location : Woodstock Nation
I know what to think about this. We are being lied to by thee powers that be and have been from the beginning. Time for the lies to stop.