A research team led by Uppsala University scientists has sequenced and compared the genomes of a bumblebee species called Bombus sylvicola and a previously unidentified sister species living in sympatry in the Rocky Mountains, the United States. 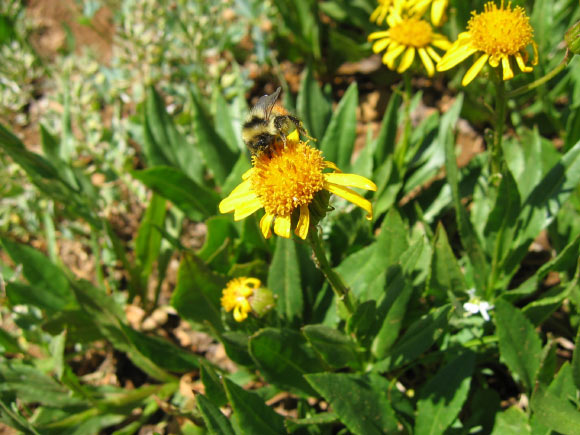 Bombus incognitus is indistinguishable from Bombus sylvicola using typical diagnostic characters. Image credit: Jennifer Geib.
Bombus sylvicola is a boreal-alpine species of bumblebee native to North America.
The species is common throughout high elevation habitats of the western United States, north to Alaska and across the northernmost parts of Canada.
Commonly known as the forest bumblebee, it lives in open, grassy habitat such as mountain meadows. It nests underground, or sometimes on the surface.
“Bumblebees are vital for agriculture and the natural world due to their role in plant pollination,” said senior author Professor Matthew Webster from the Department of Medical Biochemistry and Microbiology at Uppsala University and his colleagues.
“There are more than 250 species of bumblebee, and they are found mainly in northern temperate regions of the planet.”
“Alarmingly, many species are declining due to the effects of climate change, and those with alpine and arctic habitats are particularly threatened.”
“However, the full diversity of bumblebee species in these environments is still unknown.”
In the study, the researchers surveyed the genomic variation in Bombus sylvicola by whole-genome resequencing of 284 specimens from across the Rocky Mountains in Colorado.
Unexpectedly, these specimens fell into two distinct genetic clusters, revealing the presence of a previously unknown cryptic species living in sympatry with Bombus sylvicola, which the authors name Bombus incognitus.
By comparing the genomes of Bombus sylvicola and Bombus incognitos, they were able to learn about how the new species formed.
They found signals consistent with gene flow between the species during their evolution.
They also identified parts of chromosomes that are incompatible between species, which act as genetic barriers to gene flow and were likely important in causing the species to separate.
“We compared variation across the genomes of two recently-diverged cryptic bumblebee species living in sympatry,” they explained.
“This comparison revealed the presence of restricted genomic islands with elevated levels of absolute divergence.”
“This pattern suggests that the two species diverged under conditions of gene flow, which was restricted in regions of low recombination close to centromeres.”
“These results imply that recombination rate variation could often be a crucial factor in determining the location of genomic barriers to gene flow between incipient species.”
“We speculate that climatic fluctuations could be an important driver of speciation by this process in bumblebees with high-altitude habitats, whereby periods of warming lead to periodic population fragmentation at higher altitudes followed by secondary contact and differentiation under gene flow.”
The results were published in the journal Molecular Biology and Evolution.
_____
Matthew J. Christmas et al. Genetic barriers to historical gene flow between cryptic species of alpine bumblebees revealed by comparative population genomics. Molecular Biology and Evolution, published online April 6, 2021; doi: 10.1093/molbev/msab086