Shocking video reveals cell tower transmissions interfering with xylitol crystal formation, showing disruption of “morphic resonance”
Scientists have long known that crystals form into patterns which are instantaneously communicated to other molecules around the world, as if invoking a kind of “cosmic internet” that remains unseen.
As Woodard and McCrone wrote in their article, ‘Unusual crystallization behavior,’ published in the Journal of Applied Crystallography (Vol. 8, 1975, p. 342.)
Xylitol, first prepared in 1891, was considered a liquid until 1941 or 1942, when a form melting at 61 °C crystallized (Wolfrom & Kohn, 1942). These experiments were successfully repeated by Carson, Waisbrot & Jones (1943) and in the course of further recrystallizations a new form, melting at 94°C, crystallized. Subsequent attempts to prepare the lower melting form were unsuccessful (KiT & Jeffrey, 1969).
There are many instances, some reported in the literature, and many others not, of crystalline compounds behaving respectably for many months or years until nucleation of a more stable form.
After this occurs, the previously obtained crystal form cannot be made to crystallize often even in laboratories many miles away. We have recently encountered such an event and became interested in the prevalence of such behaviour. The results were so interesting to us we felt your readers might be equally interested.

Morphic resonance and the cosmic database of knowledge

What McCrone had stumbled across is the shocking reality that molecules communicate morphic structure “knowledge” to other molecules, and this communication requires no technology and isn’t limited by distance.
Pioneering science thinker Rupert Sheldrake calls this phenomenon, “Morphic resonance,” and describes morphic fields as “habits of nature” that are used by molecules and living systems to remember and communicate knowledge, structure and organizational information. Sheldrake’s books include, “Morphic Resonance,” “A New Science of Life” and “The Presence of the Past.” I encourage you to read them.
Just as molecules “remember” how to form new configurations — and instantly communicate that knowledge to other molecules around the world — living things such as insects, animals and human beings also rely on morphic fields. Morphic resonance information allows spiders to repair broken spider webs and salamanders to regrow lost limbs. Morphic fields are used by human embryos to grow into a fully-formed human beings, and the healing of wounds relies on morphic fields to instruct individual cells on how to repair the structures they need to repair. (Human genes describe almost nothing about the human being, as genes are mostly focused on protein synthesis, not the structure of the whole human body.)
Although xylitol was previously known as a liquid at room temperature in the 19th century, xylitol learned to coalesce into new morphology as explained by McCrone, above. Now, xylitol “freezes” into crystals at room temperature.

Testing morphic resonance in the lab

Intrigued by this theory of morphic resonance, I decided to film the crystallization of xylitol using a video microscope in my lab. After melting small piles of xylitol into a ceramic container, I filmed crystals growing both with and without 4G cell phone interference. The difference in the formation of the crystals is remarkable. 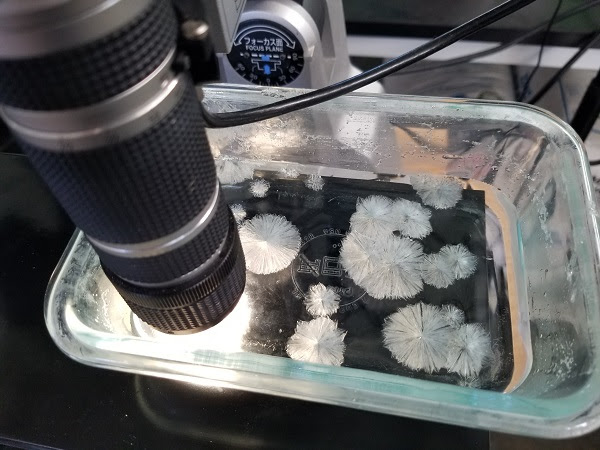 When 4G cell phone energy is not present (I do not have a 5G phone so couldn’t test that), the resulting crystals were quite beautiful, symmetrical and resembled flowers (you can see the video of this forming by watching my podcast video below): 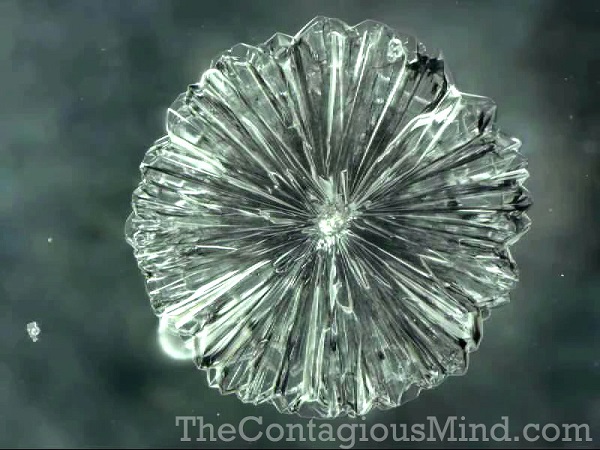 When 4G cell phone energy was present, the crystals tended to form dirty, chaotic, structures that lacked symmetry and appeared to be “fractured.” 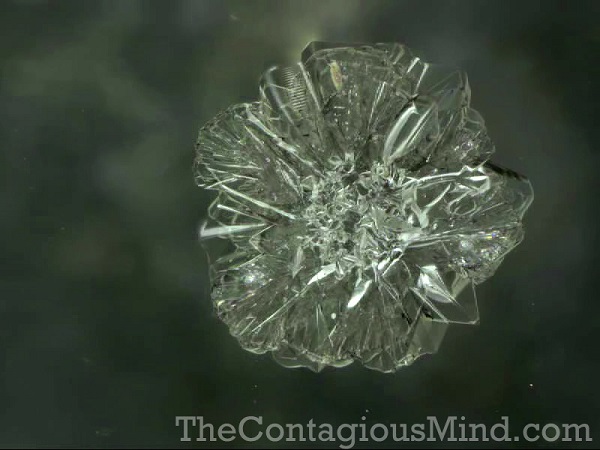 In one instance, a xylitol crystal structure formed — and you can see this “growing” in the video below — that resembled some sort of vicious claw or mouth of a beast. Notice that lack of symmetry and the strange straight lines that characterize this crystal, formed in the presence of 4G cell phone interference: 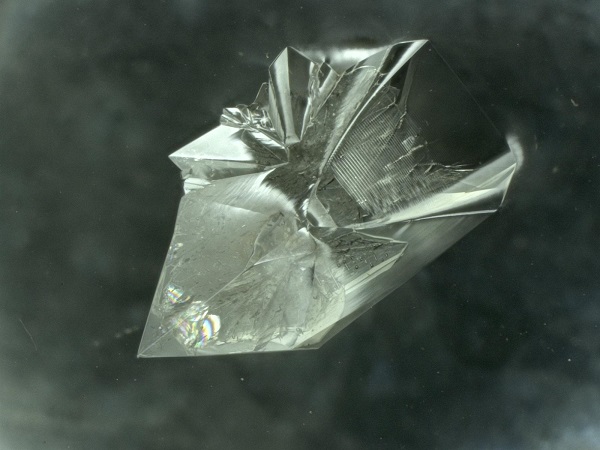 A closer look at the “beast” image above, reveals strange lines and dots, arranged almost in a kind of “script” — like an alien Morse Code or something similar: 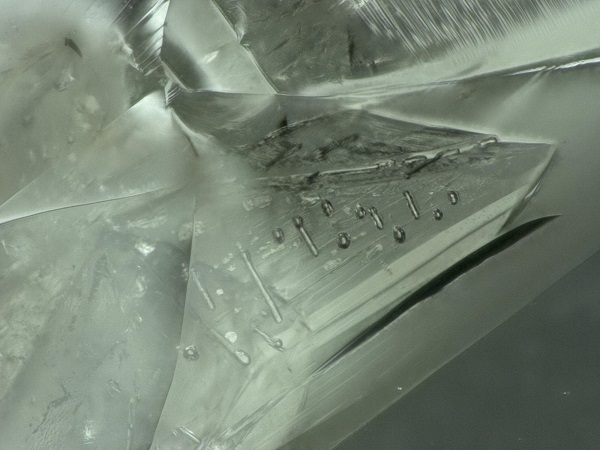 The matrix of straight lines appears at a specific frequency / distance / wavelength. With better measurement tools, we could measure the nanometer width between these lines and perhaps deduce something about the frequencies used by cell phones. Notice how they are fractured by “lightning strikes” that are woven into the pattern of lines.
Also remember as you see this: What you are seeing it nothing by xylitol, which is nothing but carbon, hydrogen and oxygen atoms. There is nothing else in this solution. 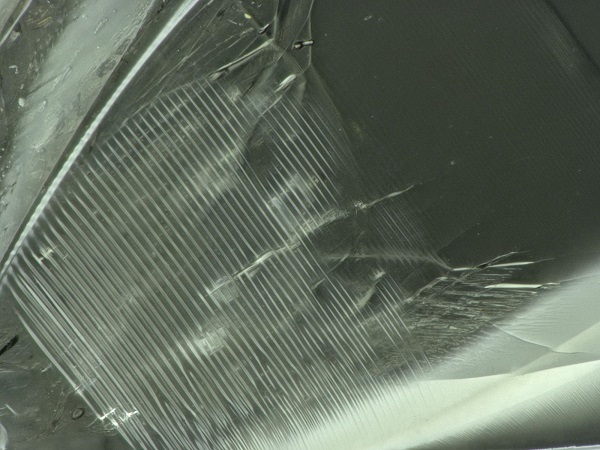 We also see the formation of crystal “tumors” that would adhere to the edges of other crystals, forming chaotic, cancer tumor-like shapes that lacked symmetry or a clear nucleus. 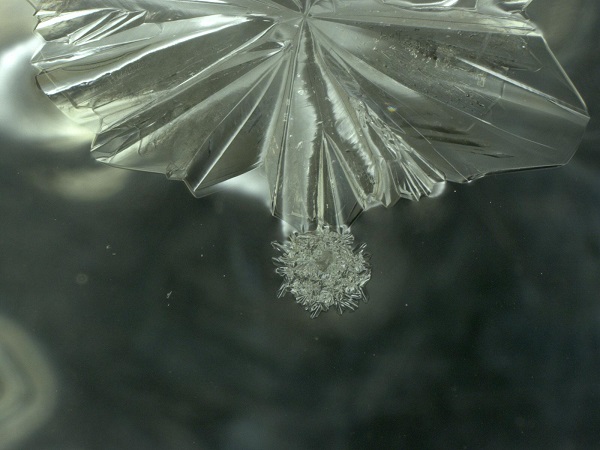 Learn about morphic resonance and The Contagious Mind

I also strongly recommend you purchase and read all the books by Rupert Sheldrake — or read his website at Sheldrake.org — who will no doubt be fascinated to see these microscopy photos and videos. As of this writing, he is not aware I have been working on this subject, but I look forward to sharing more video microscopy results with him. Sheldrake is giving a live online talk about morphic resonance on April 30th, at 7pm UK time.
See the details of that talk at this link.