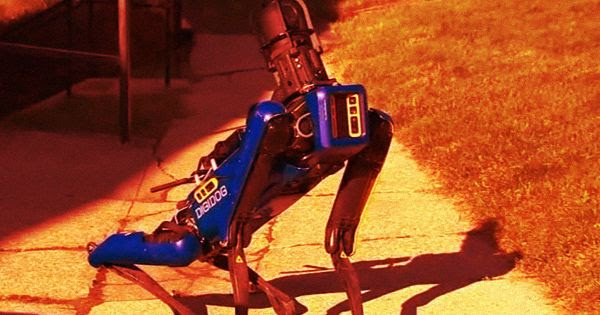 "What the fuck is this is the exact right reaction."

A new video going viral on Twitter shows a robot police dog patrolling with cops from the New York City police department.
The unit, a Spot robodog built by Boston Dynamics, can be seen going for a walk around a public sidewalk, surrounded by several police staff.

Nah they really got these robot police dogs in NYC. This is wild

The sighting was met with outrage, with many bystanders audibly voicing their displeasure with the dystopian “Black Mirror”-like appearance.

“I ain’t never seen nothing like this in my life,” the person filming the video can be heard saying.
Renowned New York Times journalist Kara Swisher was equally appalled.


“What the fuck is this is the exact right reaction,” she tweeted in response to the video.
It’s still unclear how the NYPD is planning to make use of the robot. The video comes after several instances of police staff rolling out the robot dog in public streets.

The decision to deploy the robots was met with widespread criticism and raised privacy concerns among many earlier this year. In February, the robot was used during a Bronx home invasion to reportedly ensure that there was nobody inside, as The New York Times reported at the time.
The police have maintained that they are using the robots to save lives.
“The NYPD has been using robots since the 1970s to save lives in hostage situations and hazmat incidents,” the department tweeted in February. “This model of robot is being tested to evaluate its capabilities against other models in use by our Emergency Service Unit and Bomb Squad.”

Boston Dynamics has attempted to distance itself from its products being used by not only police departments around the world, but military armed forces as well.

Last week, news emerged of a French military school deploying a Spot robot dog during a two-day training exercise.
“We think that the military, to the extent that they do use robotics to take people out of harm’s way, we think that’s a perfectly valid use of the technology,” Boston Dynamics’ VP of business development Michael Perry told The Verge.
The company’s terms of service forbid the robot dog from being used to “to harm or intimidate any person or animal, as a weapon, or to enable any weapon.”
Given the latest incidents, either Boston Dynamics either has a very loose definition of the word “intimidate” — or it simply isn’t willing to enforce its terms of service.

It’s also a bad look because the NYPD already has a very shaky image in the eyes of the public. Deploying a robot dog to its front lines will likely only alienate civilians even further.