The Roadmap for the ‘Great Reset’ 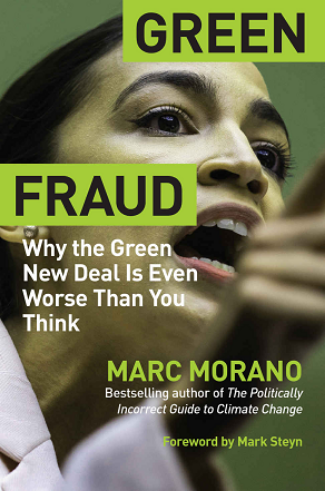 Source: Janet Levy
As far back as 1996, Mikhail Gorbachev laid bare the agenda driving climate alarmism: “The threat of environmental crisis will be the international disaster key to unlock the New World Order.” He was underscoring the importance of advancing Marxist objectives by creating an emergency to convince people they must surrender freedom to be safe. That idea has been parlayed over the decades into a global campaign of the Left to control vibrant economies, end individual freedom and national sovereignties, and impoverish the world. In America, it is being served up as the Green New Deal (GND).
Author Marc Morano exposes that elaborate con game in Green Fraud: Why the Green New Deal Is Even Worse Than You Think. Morano is a former senior staff member of the Senate Environment and Public Works Committee and narrator of the film Climate Hustle. His book shows how the GND — which dovetails with the U.N.’s Agenda 21 — has nothing to do with “saving the planet” and is actually about “transforming modern America into a centrally planned and managed society and imposing an ideology that will rein in the freedoms of individual Americans.”
Like Gorbachev, GND champions admit as much. Morano quotes Saikat Chakrabarti, former chief of staff to debutant Congresswoman Alexandria Ocasio-Cortez, as saying, “We really think of it as a how-do-you-change-the-entire-economy thing.” And he cites Ocasio-Cortez’s campaign aide Waleed Shahid explaining the GND as “a proposal to redistribute wealth and power from people on top to the people at the bottom.”
For an agenda so ambitious, the name ironically draws on FDR’s failed New Deal of the 1930s, a massive program that expanded the size and scope of the federal government to stimulate an economic recovery but ended up prolonging the Great Depression. The prognosis for the GND — which includes components like universal healthcare, guaranteed annual income, affordable housing, clear water and air projects, and special social and racial justice goals — is worse. Says David Ridenour, president of the National Center for Public Policy Research, “To reach zero net-carbon emissions in 10 years, the government would regulate and ultimately prohibit the use of affordable energy sources. This would trigger a massive decline in industrial productivity and result in mass layoffs.”

Morano attacks the misconception that CO2 levels are rising, explaining how they are in fact among the lowest now in Earth’s history, and debunks the idea that it is the “control knob” of the climate. He notes how land use, volcanoes, wind oscillations, ocean cycles, solar activity, the Earth’s tilt, and multifarious other factors impact climate, adding up to much more than the impact of CO2. He explains that the gas is a harmless and essential component of the atmosphere, a natural product of respiration. Climate scientist Anastasios Tsonis, a former distinguished professor emeritus of University of Wisconsin, is in agreement: “I’m a skeptic not just about global warming but also about many other aspects of science… Climate is too complicated to attribute its variability to one cause.”
In truth, the GND is an all-encompassing attack on capitalism, wealth creation, and freedom; it’s a vehicle for a “fundamental transformation” of our constitutional republic. The list of non-climate issues tagged on to so-called green goals is ludicrous: income inequality, racial wealth divide, gender earnings gap, ad infinitum, ad nauseum. Ocasio-Cortez even believes 100% renewable energy will lead to “economic, social, and racial justice” in America. Meat-eating isn’t spared: the GND proposes to end meat-eating, in line with U.N. climate advisors’ suggestion that meat-eaters be ostracized like smokers and meat prices wildly inflated to discourage consumption. Why? Flatulent cows and sheep flood the atmosphere with climate-changing methane. To get to “net zero” emissions by 2050, GND proponents want to eliminate private vehicles, home ownership, and air travel; they also want to ban new roads, fossil fuel production, and nuclear power. These will be achieved through draconian taxes and regulations that advance the Left’s depopulation and deindustrialization agenda.
Shorn of environmental hysterics and the accompanying litany of socialist solutions — massive government intervention, population control, wealth redistribution, economic restructuring, and limits to national sovereignty — the GND is an onslaught on the very American spirit of freedom, innovation, and creativity that leads to prosperity. It’s well known that prosperous countries do a better job preserving the environment and providing efficient healthcare and cleaner air and water to their people.
In Green Fraud, Morano tallies the astronomical cost of the GND’s fossil fuel phase-out, predicated on the false premise that fossil fuels are a cost rather than a net benefit to society. According to the Competitive Enterprise Institute (CEI), a libertarian think tank, phasing out fossil fuels and regulating how electricity is produced will cost the average household $75,000 annually. It will also result in steep economic depression and a massive increase in land use for no meaningful climate benefit. The institute calls the GND a “back-to-the-Dark-Ages manifesto” and has released a series of educational videos on the GND’s “heavy-handed regulations.”
Contrary to the GNP’s insistence on renewables, the world continues to run on fossil fuels. According to the Statistical Review of World Energy 2019 by BP Plc, oil, coal, and gas constitute 85% of the world’s energy consumption while wind and solar represent only 3%. This despite $50 billion in subsidies. Fans of wind and solar energy ignore the mining of rare earth minerals used in components, the toxic wastes produced, and that components — like windmill blades, which are buried upon scrapping — cannot be recycled. Solar panels create 200 times more waste than nuclear plants. To produce the same amount of energy, solar and wind farms require 300-400 times more land on average than a natural gas or nuclear plant. Manufacturing the rechargeable batteries used in electric vehicles requires the mining of huge amounts of cobalt, lithium, manganese, copper, and other minerals, resulting in massive environmental costs.


During the pandemic, climate activists and left-leaning celebrities celebrated the economic collapse and hoped it would result in an inflection point for the planet as the world came to a standstill. Some linked the coronavirus to climate change. Actress-turned-scientist Jane Fonda nonsensically ventured: “The melting of the Arctic sheet is releasing untold pathogens to which humans are not immune.” Lockdowns necessitated by the pandemic were viewed as a template for the GND. Klaus Schwab, chairman and founder of the World Economic Forum, gleefully contemplated how COVID lockdowns could morph into climate lockdowns.
These might seem like over-the-top instances of Lysenkoism at work — the willful distortion of science to serve a political purpose. But the ‘woke’ Left has long been utilizing environmentalism to advance its agenda, insidiously linking climate issues to race, identity, gender, and whatnot. Unfortunately, fashionable ‘wokeness’ is gaining traction. NASA climate scientist Kate Marvel thinks “climate justice and racial justice are the same thing, and we’ll never head off climate catastrophe without dismantling white supremacy.”  U.N. delegates came up with a Gender Action Plan based on observations that climate change “exacerbates existing gender inequality.”
Morano final statement on saving America and the world from a crew of anarchists and radicals says it all: “The way forward is already clear. Improving technologies, expanding energy access, and growing economies in the developing world are already improving the environment in the United States and across the world more than any Green New Deal, UN treaty, or carbon (dioxide) taxes ever conceivably could.”
We must halt the GND and curtail this leftist madness. Or we will lose the world’s greatest experiment in liberty. We will lose America and what it stands for.