No Shot No Public School

According to a notice from the State of California Department Health and Human Services, all medical exemptions for children attending state public schools are now revoked and no longer valid. Specifically, medical exemptions that meet two conditions under the amended law eliminates a parent’s ability to exempt their children from one, some, or all vaccines, at the start of coming school year, January 1, 2021-2022 (or September 1, 2021, for child care facilities).
In a shaming ritual some call a witch hunt, The California DPH “disciplined” a group of medical doctors and publicly blacklisted them by name and license number. More than 8500 doctors are listed in a 92-page document found here. If a doctor who wrote a child’s exemption is on the list, or was disciplined in some small way, that child’s medical exemption will not be considered valid for the next school year.
Moreover, public health officials will have the power to call the shots in schools that have less than a 95% vaccination rate, and revoke exemptions they consider illegitimate. Why 95%? To achieve community immunity, the new herd immunity, as defined by government entities. Has Herd Immunity been redefined to favor mass vaccination programs?

In 2015, SB277 was the first of two California bills that led to the end of religious and philosophical vaccine exemptions in state public and private schools. Home School and medical exemption remained the only recourse for parents who chose not to vaccinate their children for any reason. In one fell swoop, the government system abolished both parental rights and informed consent for medical procedures, along with a respect for the privacy of the doctor-patient relationship.

The trampling of natural rights by government entities represents the paradox of “government rights,” which do not exist.
Governments can only grant privileges, which can be altered or abolished, at the whim of government. Whether a government revokes exemptions or revokes a doctor’s medical license, government is regulating behavior. Are officials also practicing medicine without a license by interfering in healthcare decisions? According to Black’s Law Dictionary, a license is:

A permission, accorded by a competent authority, conferring the right to do some act which without such authorization would be illegal, or would be a trespass or a tort. 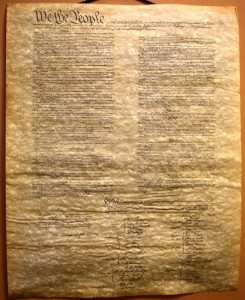 The Charters of Freedom that protect natural rights are documents written by men that fall under Man’s Law. They include The Declaration of Independence ad the U.S. Constitution. They are metaphorical shields that lay out the terms of how government is established to protect natural rights and freedoms. Government is not instituted to usurp rights and freedoms.
The Declaration of Independence holds that:

We hold these truths to be self-evident, that all men are created equal, that they are endowed by their Creator with certain unalienable rights, that among these are life, liberty, and the pursuit of happiness. That, to secure these rights, governments are instituted among men, deriving their just powers from the consent of the governed. That, whenever any form of government becomes destructive of these ends, it is the right of the people to alter or to abolish it, and to institute new government, laying its foundation on such principles, and organizing its powers in such form, as to them shall seem most likely to effect their safety and happiness.

The United States Constitution is another “Charter of Freedom,” written to ensure inherent rights of the people.
However, there are two problems with these documents, which explains why governments ignore their stated protections today.

The U.S. Constitution is Null and Void

The Charters of Freedom were written with the intention of the authors for the time of their signing. They were not intended to be valid indefinitely.
In a letter written to James Madison from Paris after the French Revolution had broken out, Thomas Jefferson (1743-1826) wrote that any Constitution expires after 19 years and must be renewed if it is not to become “an act of force and not of right”:

The question Whether one generation of men has a right to bind another, seems never to have been started either on this or our side of the water… (But) between society and society, or generation and generation there is no municipal obligation, no umpire but the law of nature. We seem not to have perceived that, by the law of nature, one generation is to another as one independant nation to another… On similar ground it may be proved that no society can make a perpetual constitution, or even a perpetual law. The earth belongs always to the living generation… Every constitution, then, and every law, naturally expires at the end of 19. years. If it be enforced longer, it is an act of force and not of right.

Thus, the American Constitution lapsed and became null and void in 1808.
In Jefferson’s mind, “no society can make a perpetual constitution, or even a perpetual law”. The only “umpire” between the generations was the law of nature.”


The Law of Nature 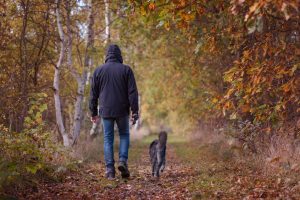 The truth about Man’s laws vs. Nature’s laws is revealing itself by the perceived tyrannical acts taken by State governments. These Acts and actions appear to remove inherent rights under Color of Law. What is Color of Law?

Color of Law refers to an appearance of legal power to act that may operate in violation of law when no such law actually exists. For example, if a police officer acts with the “color of law” authority to arrest someone, the arrest, if it is made without probable cause, is in violation of the law.

Removal of exemptions by state governments are tests for the people to wake up to reclaim their inherent rights, the rights they never lost in the first place. Have people forgotten where freedom lives, or have they become unconscious of who they are? Are they ready to step up to remind law makers what a public servant is, and who holds the higher authority under a higher set of laws?


Freedom exists under Natural Law.
Natural Law and Justice is and always has been, the primary fundamental force in the universe. Nature’s Law is a body of Universal Spiritual Laws which govern Consciousness. Consciousness creates through each of us using free will. If people became conscious, they would discover that we are Consciousness. We decide.
People have forgotten Natural Law because they are not told by government officials that freedom does not lapse and does not require renewal. Unconscious people have stopped taking action to secure their freedoms because they have forgotten that they embody freedom. 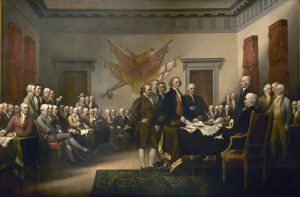 When a small band of British immigrants history called forefathers created government in America as a Constitutional Republic, the governed people assumed they would be recognized to hold certain inalienable rights; rights which are not transferable and which can never be revoked, regardless of what the majority wants, or who holds power.
However, what the people agreed to is a Democracy, not a Republic.

ANY and ALL exemptions for government vaccine programs, whether medical, religious or philosophical/personal belief, are fundamentally illegal, because they transpose an inherent human RIGHT into a PRIVILEGE and BENEFIT on the presumption that you acknowledge and thus forfeit your natural born “freedom of choice” to an external authority.
Privileges and benefits are codified, or codes in legalese. Legalese is the language of statutes, which redefines words as tools to expand the scope and power of the State. Under statutes, a “person” is a legal fiction, not a human being with free will. At the same time, a “corporation” is defined as “[url=https://legal-dictionary.thefreedictionary.com/corporation#:~:text=corporation a group of persons who are deemed,name as if it were a natural person.]a number of persons united in one entity”[/url], so it can acquire wealth, expand, and enjoy other rights.” Note: a corporation is incapable of loyalty or love.
However, once you are aware of who you are, you can reassert your rights. 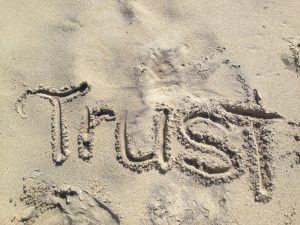 When people follow government dictates as truth, they lose touch with their ability to trust themselves. They lose touch with intuition, a direct perception of truth. Intuition exists without the need for conscious reasoning. If intuition goes dormant, it is because people lose connection with Nature.
As long as people are distracted, debating the details of the systems in place, fighting wars of race and religion, following unlawful mandates, participating in rigged S-elections, watching rigged sports, dividing ourselves into political pawns and gender, debating “the science,” we, as humanity, are directionless, lost in a maze of confusion. By consenting to a Divide-n-Conquer system of systems, thorough our participation, the system survives and thrives off human energy, much like a parasite survives and thrives off a human body. Read Parasites Among Us to understand the relationship we unconsciously agree to.
If America is held up as an example of freedom to the rest of the world, or even to itself, Americans must get rid of the Acts, and identify with Natural Law. They must trust their intuition and allow it to become stronger by using it, often, like a muscle. There is no better place for building intuition than surrounded by Nature.

When people allow government entities to grant privileges that expire, they reap what they sow. Freedom is not found in charters or entities, or pitchforks. Freedom is embodied through individuals who claim it and defend it where it lives, inside each of us. Freedom is like healing because healing is found in the innate immune system, which is found in each individual, not in any public health system that acts as gatekeeper to your health.
Healing comes through relationship with Nature; with the Earth, with the plants and animals, and ultimately with respect for each other as individual healers. Ultimately it is Nature, not government, that is the true ally of the people. The Native Americans reflected this truth in how they lived in cooperation with Nature. By doing so they showed the human potential, even under the tyranny of government entities attempting to end their relationship with Nature. If people reclaim responsibility for their role under Nature’s laws, then the purpose of government changes. Everything changes.
Updated from October 2020 and 2017.
See also The People’s Choice: Ignorance or Freedom, The Frequency of Freedom, The Ruse of Children’s Rights, Government Calling the Shots: The Ruse of Exemptions, The Health Freedom Equation, Mandates Are For Slaves. Got Freedom? Finding Freedom When Governments Go Rogue, and  Mandates are Constitutional. Not!
Source: Nature of Healing
Rosanne Lindsay is a Naturopath, Herbalist, writer, and author of the books The Nature of Healing, Heal the Body, Heal the Planet and Free Your Voice, Heal Your Thyroid, Reverse Thyroid Disease Naturally. Find her on Facebook at facebook.com/Natureofhealing. Consult with her remotely at www.natureofhealing.org. Listen to her archived podcasts at blogtalkradio.com/rosanne-lindsay. Subscribe to receive blog posts via email using the form at the bottom of this page.