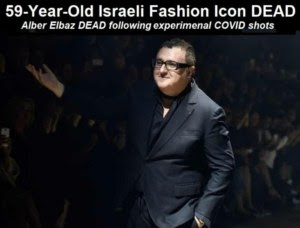 Original Image Source.
by Brian Shilhavy
Editor, Health Impact News
Another public figure has died following injections of the experimental COVID shots.
Israeli fashion icon Alber Elbaz has reportedly died at an American hospital in Paris, France, over the weekend.
The French Press (Elbaz worked and lived in France) and many of the European Press have originally reported that his cause of death was “unknown,” but Israeli Press are now reporting that he died of the “South African variant of COVID-19,” while admitting that he was “fully vaccinated.”

The world of fashion mourns Alber Elbaz. The Israeli designer died yesterday at the age of 59 at the American Hospital in Paris. According to Wwd reports, the causes of death are still unknown but according to the Israeli newspaper Hareetz, the designer would have died from the consequences of Covid.
Born in Casablanca in 1961, and moved with his family to Israel when he was 10, Elbaz studied at Shenkar College of Engineering and Design and then moved to New York in 1985, where he was Geoffrey Beene’s right-hand man for 7 years.
Flew to Paris, Elbaz first designed Guy Laroche and then Yves Saint Laurent’s Rive Gauche label, before taking over the creative reins of Lanvin in 2001 until 2015: in 14 years, the designer revolutionized the French label, transforming it from a small family business founded by Jeanne Lanvin in 1889 to one of the most popular Parisian brands.
In a handful of seasons, Elbaz has managed to rejuvenate the Faubourg Saint-Honoré brand by focusing on the cocktail dress and its idea of ​​an elegant, sophisticated and hyper-feminine woman. In his collections there was never a lack of ruffles, draperies,
Demi Moore, Nicole Kidman, Catherine Deneuve and Kate Moss are just some of the stars she has dressed over the years, as is Meryl Streep, who collected the Oscar for The Iron Lady wrapped in a Lanvin dress. (Source.)

His death was described by some as “sudden.”

“It was with shock and enormous sadness that I heard of Alber’s sudden passing,” Richemont chairman Johann Rupert said in a statement. No cause of death was given. (Source.)

We are not sure why the Israeli Press is claiming he died from the “South African strain of coronavirus,” since he was hospitalized and died in Paris, but that is what they are claiming, while at the same time acknowledging that he was “fully vaccinated.”
The Times of Israel reports:

Alber Elbaz, a top Israeli fashion designer known for his industry-altering influence in the Paris fashion industry, died Saturday from the coronavirus in a Paris hospital. He was 59 years old.
According to Israel’s Channel 12 news, Elbaz was infected with the South African COVID variant despite being fully vaccinated. Elbaz, who was born in Morocco, has three siblings living in Israel and will be buried in the Jewish state. (Source.)

Since it is being reported that he was “fully vaccinated,” that means he probably received two doses of one of the experimental COVID injections, most likely either the Pfizer or Moderna mRNA shot, both of which are available in France.
AstraZeneca is also a 2-dose injection offered in France, but it was paused for a while, and is only offered to those in the same age range as Elbaz with certain other pre-existing conditions.
An Israeli study earlier this month (April, 2021) purported to claim that the South Africa strain of COVID-19 can “evade some of the protection of the Pfizer-BioNTech vaccine.”

The coronavirus variant first discovered in South Africa is able to evade some of the protection of the Pfizer–BioNTech vaccine, according to a new Israeli study, which has not yet been peer-reviewed.
Researchers at Tel Aviv University and Clalit, the largest health-care organization in Israel, examined nearly 400 people who had tested positive for Covid-19 after receiving at least one dose of the vaccine. They compared them to the same number of people who were infected and unvaccinated.
The researchers found the prevalence of the variant from South Africa, known as B.1.351, among patients who received two doses of the vaccine was about eight times higher than those who were unvaccinated. The data, published online over the weekend, suggest the B.1.351 is better able to “break through” the protection of the vaccine than the original strain, the researchers wrote in the study. (Source.)

Of course there are two ways to interpret this study, although the press release only gave one interpretation: the new variant virus “evaded” the Pfizer COVID “vaccine.”
The other interpretation, since more people injected with the Pfizer shots allegedly tested positive for this “new strain” than those without the injections, would be that there is actually a causative relationship between the Pfizer shots and this alleged “new strain.”
That potential interpretation will, of course, be rejected outright by medical authorities and their corporate media, because it is bad press for the new shots and will reduce sales.
It would also give further evidence that the injections themselves contributed to or caused the death of Mr. Elbaz.
According Dr. Michael Yeadon, Pfizer’s former Vice President and Chief Scientist for Allergy and Respiratory, variants of the original COVID-19 virus are no more contagious or dangerous than the first Wuhan version, as they are over 97% the same. See:

Many thousands of people worldwide have now been reported dead following injections of these experimental COVID shots, many of them high profile public figures like Mr. Elbaz where it is difficult to hide their deaths and the circumstances surrounding them, and yet the medical authorities continue to claim that they are all “coincidences” and not related to the COVID shots.
As we have previously reported, deaths following the COVID injections and are reported to the CDC VAERS system, now exceed deaths reported following FDA approved vaccines for the past 15 years COMBINED. See:


MASS MURDER: 3,486 DEATHS in the U.S. Following COVID Injections in 4 Months: More Vaccine Deaths Recorded Than the Past 15 Years COMBINED

How long will the public keep buying this lie before they wake up and figure out, perhaps too late, that this has been the plan all along?
The World Health Organization, the United Nations, the Rockefeller Foundation, and many others have been saying for years that we need to reduce the world’s population in order to save the Earth from being destroyed by climate change.
So why should it surprise people that they are now putting their plans into action to reduce the world’s population through these experimental injections?
This is no longer a “conspiracy theory.” It is a plan being executed in full view of the public, most of whom are still asleep and expecting the world to go back to “normal” if they just keep obeying everything the medical tyrants tell them to do, and surrender all their freedoms.
And in many cases, as we are now seeing, they are sacrificing their lives as well.
So believe what you want, and live with the consequences. Because the facts that both sides agree upon, are that Mr. Elbaz got the shots, and now he is dead.
He joins a very fast growing list of others that also got the shots, and are now DEAD.