‘I’m holding her hand, and her hand is limp throughout the whole thing while she’s screaming in pain…”It’s just like the worst nightmare you can ever imagine.’ 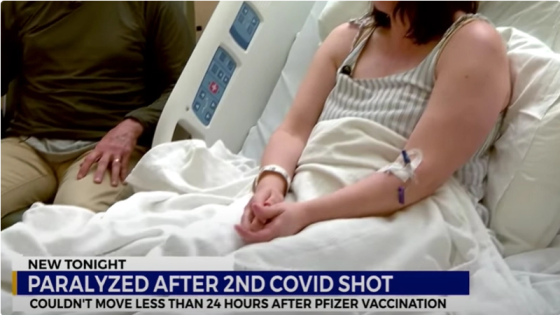 Source: Adan Salazar
A Tennessee woman is attributing severe side effects that paralyzed her from the neck down to a second dose of the Covid-19 vaccine.
Nashville resident Brandy McFadden took her second Pfizer jab on April 16.

Brandy says the issue started with a weird sensation in her legs, “Then it turned into a horrible neck pain, and it just kept getting worse and worse.”
Her husband rushed her to an emergency room where doctors were unable to diagnose the issue.
“I woke up. I can’t move my arms. I can’t move my legs. So, he’s freaking out. The doctors are panicking,” Brandy described.
“As far as to answers as to why this happened, they don’t know,” McFadden explains.


Brandy’s husband James recalled, “I’m holding her hand, and her hand is limp throughout the whole thing while she’s screaming in pain…And all the test results are coming back negative.”
The mother of three blames the jab for leaving her hospitalized and unable to walk.
“I thought maybe if anything I’d probably get like flu-like symptoms because I’d already had Covid, but I never in a million years thought I’d never be able to get up and go to the bathroom, or get up and walk to the other side of the room, or stand up and hug my kids.”
“It’s just like the worst nightmare you can ever imagine,” she laments.
According to WREG, Brandy’s medical chart from Vanderbilt University Medical Center reportedly stated,

“All of these symptoms are temporally related to the COVID vaccine, raising concern for a vaccine reaction which has been reported to VAERS for investigation.”

WSMV reports McFadden, who suffers from epilepsy, was able to connect with a woman in Pittsburgh who’d experienced the same adverse reaction, however she was not epileptic.
“It was the scariest thing in the world to go to sleep completely fine, to wake up 1:30 in the morning and not be able to move at all,” the woman reportedly stated.
Despite the two similar cases, Pfizer in a statement claimed they had “not identified any safety signals with paralysis and the Pfizer-BioNTech COVID-19 vaccine.”
“To date, more than 200 million people around the world have been vaccinated with our vaccine. It is important to note that serious adverse events that are unrelated to the vaccine are unfortunately likely to occur at a similar rate as they would in the general population,” the company wrote.
The good news is Brandy has regained slight movement in her toes and arms and will undergo an intense physical therapy regimen to hopefully help her walk again.
Unfortunately, despite the horrific reaction, McFadden insists people should still take the vaccine.

» After the second dose of the Pfizer vaccine woman puts a magnet on her arm and it sticks
» Second Dose of Pfizer COVID-19 Vaccine Takes Out 2 More Teen Boys
» Faith Ranson: 16-Year-Old Suffers Tics, Tremors And Convulsions After Receiving Second Dose Of Pfizer COVID-19 Vaccine
» 'Side-effects of second dose of vaccine are even worse than from the first dose'
» 12-Year-Old Girl is Paralyzed During COVID-19 Trials