Another Rendlesham UFO photo has emerged

Could this be the Rendlesham Forest UFO ? Image Credit: Email Submission
A retired police officer has come forward to reveal his close encounter near Woodbridge in December 1980.
The following was submitted to the site via e-mail, the author wishes to remain anonymous.

Let me take you back to December 26th 1980, a day that would ultimately change and ruin my life forever. It was a bitter cold night and as a serving police officer I was on duty. I was attending to a report of a possible domestic/disturbance/argument in the town of Woodbridge, located in Suffolk, 7 miles north-east of Ipswich in the East of England. I was roughly about a quarter of a mile away from Woodbridge when for no apparent reason my police radio was suddenly swamped with interference, static electricity and crackling noises started to emerge from it, so I decided to pull my vehicle over to the side of the road and see if I could figure out what the problem was. No sooner than I had stopped the vehicle there was an intensely bright flash of green light that lit up the whole interior of the car like a Christmas tree.

Not sure what to make of what had just happened I got out of the car to see if I could possibly figure out what caused it. Not really expecting to see anything I was completely shocked to discover a huge green-whitish, glowing, illuminated, phosphorescent disk/saucer shaped craft hovering directly above me in the sky, it was an incredible and unbelievable but frightening spectacle to witness, my skin started to tingle and the hairs on the back of my neck stood up. The saucer was huge, slowly rotating and was making a quiet/soft whirring noise. As a police officer I always carried a polaroid camera in the boot of the police vehicle when ever on driving duties, it's just something that I did. I rushed to the boot and obtained my camera, I fired off three shots, I then stood there somewhat shaken and continued to view this object.

After what felt like an eternity, but was no more than just over a minute or so, the saucer suddenly and without warning soared up high into the night sky at breathtaking and phenomenal speed and was literally gone and out of sight in a nanosecond, I was left standing there thinking to myself what the hell just happened? Two of the photos came out completely fogged and showed absolutely nothing, but luckily one came out almost perfect and showed the saucer in all it's glory, I have included that original and untouched polaroid with my email. The time of my sighting was precisely 1.55 AM. It really was like something out of a star trek movie, to be honest, words are inadequate to even begin to try and explain just how fantastic and how mind blowing this encounter was, and the colour of the saucer, it was like no other green I have ever seen, the photo really doesn't do it justice, dont get me wrong it's a wonderful polaroid but to see that saucer hovering in the sky and the sheer size of it, and the phenomenal speed at which it departed, the two simply don't compare, it was a truly mind blowing experience that no photograph could ever capture.

I had a very difficult time coming to terms with what I encountered on that December evening. Back then in 1980 there was no one to turn to, it's not like it is today, what with the internet and a simple click of a few buttons and you are instantly online talking to support groups etc, it just wasn't like that back then, plus I never wanted to tell anyone anyway, I mean would you? And especially been a serving police officer it just simply wasn't an option, so I just filed it away in the back of my mind and tried to get on with my life.

That wasn't to be though, soon after my encounter I started suffering with anxiety and panic attacks and clinical depression, I suffered terrible and frightening nightmares also and it wasn't long before things started to destroy my marriage. I took time off work but it didn't help, all I did was drink myself into oblivion and sleep all day. Eventually I confided in my wife and decided to seek professional help. I ended up in therapy, I had a psychiatrist, I was on antidepressants, this whole UFO encounter turned my life upside down and eventually I had to leave the police force on medical grounds and unfortunately I have never worked another day since. I have suffered with terrible physical and mental health problems ever since this thing happened and I know for a fact that all my health conditions are a direct result of my encounter with a flying saucer, I wouldn't wish it on anyone, not even my worst enemy.

That wasn't the end of it, I also received menacing and threatening telephone calls, even death threats a few weeks after my encounter and a couple of months later my home was subjected to an attempted arson attack, my wife believed at the time that this was an attempt by someone to try and destroy my photographic evidence and intimidate me into keeping my mouth shut, it certainly was a very unsettling and frightening time.

I can tell you this also, several days after my encounter a very good friend of mine who was a high ranking senior police officer told me that he was visited at home by 3 men claiming to be military intelligence, he said he was simply TOLD in no uncertain terms that if anyone mentions the word UFO then simply tell them that they probably saw the lighthouse and simply tell them it was faulty at the time, he said they gave him other information but he wouldn't disclose it to me.

I also heard quite a few strange tales from members of the public in the months that followed my UFO sighting, none of them were ever reported for fear of ridicule, they may sound far fetched to most people but not to me, not after what I saw. One man told me that on the 28TH December at 3AM he was awoken by his dog barking furiously at the back kitchen door, he said he opened the door and there was a small glowing orb hovering around his back garden, he said the orb shot off and his dog chased after it, suddenly it went silent and when he got around the corner of his garden the orb had fled and all that was left of his dog was a gooey puddle, he claimed his dog had been vaporized, I asked him if he reported it, he just looked at me and laughed and asked me if I was mad.

One woman told me that on the 26TH December at 2.30 AM she woke up and found herself in a forest staring at a glowing pyramid surrounded by several small humanoid entities, within seconds she claims she was suddenly back in her bed. I could tell you more incredible stories I heard and maybe one day when I have more time I will.

For all those individuals out there who simply think that the Rendlesham Forest UFO Incident was nothing more than a flying lighthouse or can be explained away by some other ridiculous explanation, let me say this, spare a thought for all those who were caught up in this, it was real, it happened FACT, end of story. Hopefully one day soon and especially within my lifetime, I hope that all the information the government have including photographic evidence is released and made available to the general public as we all have a right to know the facts and truth as to what really happened in Rendlesham Forest.

I cant mention any names or say too much, but a very trusted source told me that there are still many witnesses to come forward with their evidence. That person also told me that everyone thinks that the visitors were looking for nuclear weapons, they told me that is complete nonsense and the true explanation is that the visitors had boots on the ground and were doing something in the forest, still yet unknown and one of their team was captured, killed, bagged and tagged by the military and shipped out to a secret location for analysis and to be studied and that's the reason the visitors were seen for several days, at one point shining beams of light down as they were obviously looking for one of their own.

Makes perfect sense when you think about it, why would a biologically and technologically advanced race of extraterrestrials capable of interstellar and probably intergalactic space travel be interested in such things? That would be like NASA suddenly releasing a statement expressing their interest in caveman technology!

I will leave you all with this thought.....

THOSE WHO SPEAK DO NOT KNOW, THOSE WHO KNOW DO NOT SPEAK!!!!! 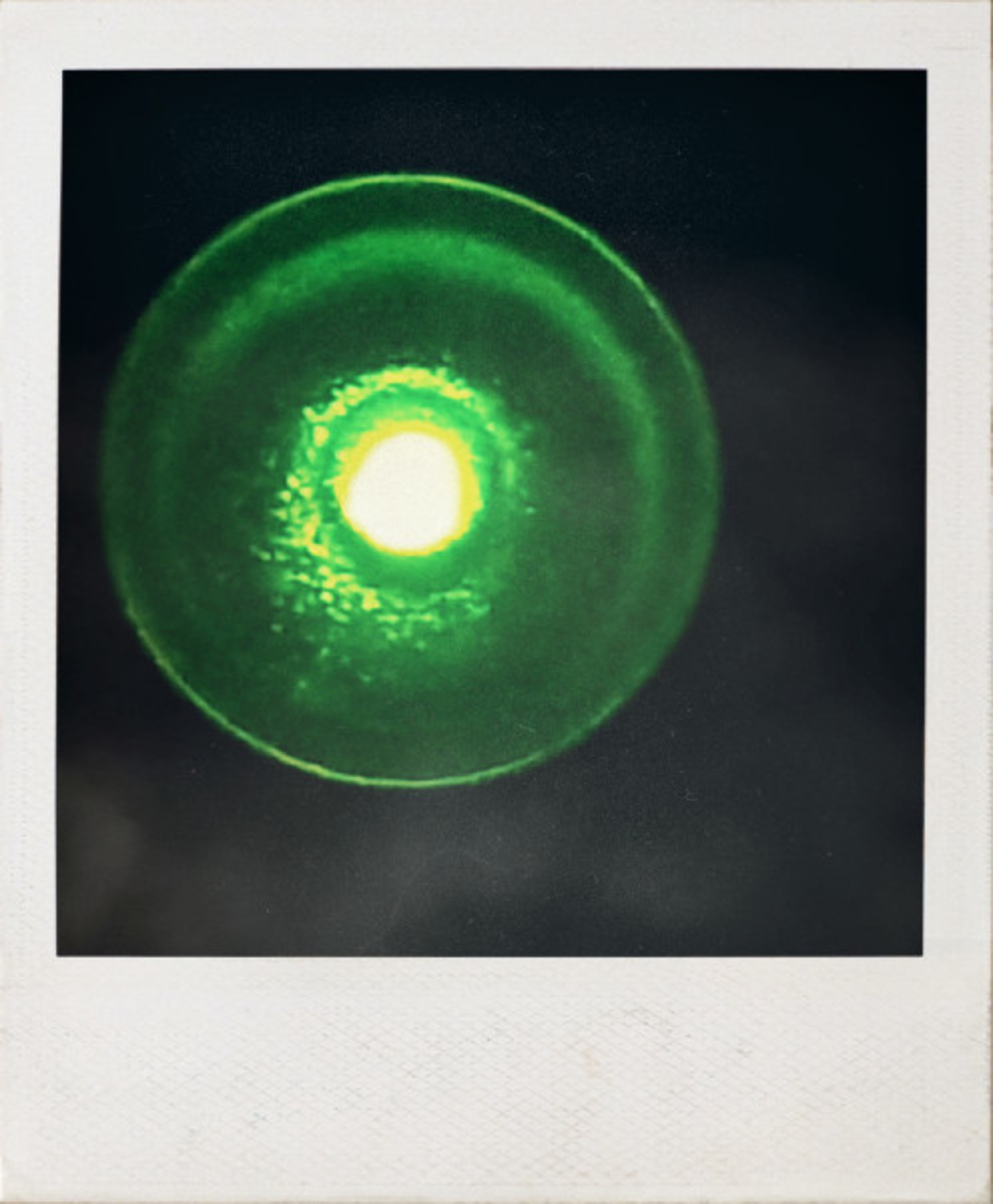 Just thought I would mention that I got a reply back from a well known UFO researcher and he told me that he has had the polaroid photograph looked at by an expert using the same software and technology that FBI and CIA photo forensic experts use for analysis, he told me it came back as clean as a whistle, completely untouched, not even 1 pixel and if it was a manipulated image that software would have detected it, he said it is one of the best he has ever seen.

Something else he pointed out which I have never seen or noticed in all the years of looking at that photo, was that he was told that clouds are actually in front of the saucer, which would make it very high up and massive and would be impossible to fake with a polaroid camera, thought I would update you.

He is correct, if you look closely at the saucer it is obscured by clouds in certain areas.