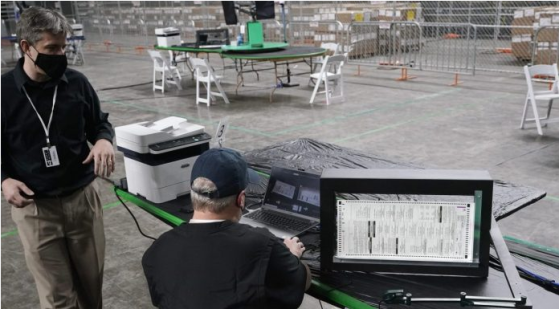 Source: Ben Sellers
An army of 100 Democrat lawyers failed yet again to stall the Arizona legislature’s audit of the 2020 election in Maricopa County.
Despite concerns over his potential ties to one of the top law firms leading the Left’s effort, Superior Court Judge Daniel Martin rejected allegations about voter privacy that the audit’s opponents had raised.
He said the plaintiffs failed to show enough evidence that the procedures would harm voters, according to AZFamily.com.
However, Martin also rejected a request from Cyber Ninjas, the auditing firm hired to oversee the examination of some 2.1 million ballots, to maintain secrecy of its proprietary methods for ensuring voter anonymity.
That meant journalists were allowed inside Phoenix’s Veterans Memorial Coliseum to observe the process, which already had reviewed an estimated 100,000 ballots since it began Friday. A multi-camera live-stream of the audit has been in place the entire time.
Martin’s decision cast doubt over whether the leftist cabal can pressure the judiciary—as it did after the Nov. 3 election—to quash any effort to uncover the suspected vote-fraud.
Among those involved in the scheme are top former Obama administration officials, at least two George Soros-funded ‘nonprofits’ and an institute with ties to the Chinese Communist Party.
“The Radical Left Democrat Party has gone absolutely INSANE in fighting the Forensic Audit of the 2020 Presidential Election Scam, right now taking place in the Great State of Arizona,” former president Donald Trump wrote in a statement Monday.
“They sent a team of over 100 lawyers to try and stop it because they know what the result of the Arizona Senate sponsored audit will be—and it won’t be good for the Dems,” Trump continued. “The audit is independently run, with no advantage to either side, but the Democrats don’t want to hear anything about it because they know that they lost Arizona, and other scam election States, in a LANDSLIDE.”
Martin took over as judge in one of the legal challenges following the recusal late last week of Judge Christopher Coury.
Right off the bat, he expressed his sympathies for the Democrats’ case, signaling that he was not persuaded that the audit could protect voter privacy.
“[T]he manner in which that audit is conducted must be balanced against the constitutional rights of the voters in Maricopa County, including the rights to secrecy and confidentiality of information,” he said Tuesday.
“… I am not yet persuaded that there has been a showing that the rights of the voters in Maricopa County are being protected,” he added.
Some feared that Martin may have his own conflict of interest due to his past work for Brown & Bain, a precursor to Perkins Coie, which has long been the go-to firm for powerful Democrats.
The leftist legal force opposing the audit is being led by notorious Perkins Coie attorney Marc Elias, dubbed by then-President Trump as Democrats’ “best Election-stealing lawyer” during the 2018 contests.
Among their many stall tactics, Democrats have maintained that Cyber Ninjas was a pro-Trump firm due to social-media comments from its founder, Doug Logan.
Even before the audit was underway, they sent cease-and-desist letters to four of the audit firms under consideration, threatening that they could subject themselves to legal liability—including harassment from the Biden Justice Department—if they cooperated with the Arizona Senate.
The lawyers also failed in a last-minute attempt to get the audit suspended over security concerns after a leftist journalist writing for AZFamily snuck into the facility prior to the delivery of the ballots and voting machines.
Democrat plaintiffs were unwilling to put up the $1 million bond to protect the audit team from financial losses due to delays.
Nonetheless, they succeeded in forcing the recusal of Coury due to the involvement of one attorney on Cyber Ninjas’ legal team who had previously worked for him.
“In the documents filed today, several attorneys appeared whose names previously were not on notices of appearance prior to Friday’s hearing,” said Coury, in an email to the attorneys.
“That is not surprising, given the short fuse in which the hearings have proceeded,” he continued. “The involvement of one attorney whose name appeared on the filings for the first time today requires me to recuse.”

While the circumstances of Coury’s recusal seemed a stretch, Martin’s links to those opposing the politically-charged audit run deep.
He was appointed to the court by then-Gov. Janet Napolitano, who would go on to become Homeland Security secretary during the Obama administration and now the top chancellor of the University of California system.
His selection to oversee the case raised several questions, not only due to Martin’s ties to Elias’s law firm, but also to a conflict of interest involving the Maricopa Board of Supervisors, which is aligned with state Democrats in the legal challenges.
The lead superior court judge in the county, Pamela Gates, is the wife of Maricopa Vice Chairman Bill Gates. She also was responsible for Martin’s selection following Coury’s recusal, the Gateway Pundit reported.
Although Gates and three other members of the five-person board are Republicans, the board has been persistent in its efforts to thwart the state-run audit.
The sheer determination of the opposition to derail the effort led Trump to muse that RINO state leaders had colluded with leftists in a cover-up scheme.
“The Governor of Arizona, Doug Ducey, has been shockingly of zero help to the State Senate,” Trump said last week.
“He wants to ‘pretend’ the election was free and fair,” Trump continued. “What are he and the Maricopa County Commissioners trying to hide?”

» What Will Democrats Do about the Maricopa County 2020 Election Audit?
» It Is Getting Deep in Arizona as Audit Results Continue to Be Released
» Judge Rules Arizona County Must Provide Suspected 2020 Ballots to State Senate
» BREAKING BIG — Jovan Pulitzer: Arizona Audit Report Will be Delivered to Senate on Friday, Results Will Be Earth-Shattering
» Maricopa County Judge Handling Audit Challenge Recuses Himself Last Minute Before Hearing