OUT OF MIND » BREAKING NEWS & HOT TOPICS » THE GREAT DIE OFF » Wow! They Really Do Not Want You All to See Any Vitamin D/CV info!!! Dr Mercola Gets Threats!

Wow! They Really Do Not Want You All to See Any Vitamin D/CV info!!! Dr Mercola Gets Threats!

Over the past year, I’ve been researching and writing as much as I can to help you take control of your health, as fearmongering media and corrupt politicians have destroyed lives and livelihoods to establish global control of the world’s population, using the COVID-19 pandemic as their justification.

I’ve also kept you informed about billionaire-backed front groups like the Center for Science in the Public Interest (CSPI), a partner of Bill Gates’ Alliance for Science, both of whom have led campaigns aimed at destroying my reputation and censoring the information I share.

Other attackers include HealthGuard, which ranks health sites based on a certain set of “credibility criteria.” It has sought to discredit my website by ensuring warnings appear whenever you search for my articles or enter my website in an internet browser.

HealthGuard, a niche service of NewsGuard, is funded by the pharma-funded public relations company Publicis Groupe. Publicis, in turn, is a partner of the World Economic Forum, which is leading the call for a “Great Reset” of the global economy and a complete overhaul of our way of life.

HealthGuard is also partnered with Gates’ Microsoft company, and drug advertising websites like WebMD and Medscape, as well as the Center for Countering Digital Hate (CCDH) — the progressive cancel-culture leader with extensive ties to government and global think tanks that recently labeled people questioning the COVID-19 vaccine as a national security threat.

The CCDH has published a hit list naming me as one of the top 12 individuals responsible for 65% of vaccine “disinformation” on social media, and who therefore must be deplatformed and silenced for the public good. In a March 24, 2021, letter1 to the CEO’s of Twitter and Facebook, 12 state attorneys general called for the removal of our accounts from these platforms, based on the CCDH’s report.

Two of those state attorneys general also published an April 8, 2021, op-ed2 in The Washington Post, calling on Facebook and Twitter to ban the “anti-vaxxers” identified by the CCDH. The lack of acceptance of novel gene therapy technology, they claim, is all because a small group of individuals with a social media presence — myself included — are successfully misleading the public with lies about nonexistent vaccine risks.


“The solution is not complicated. It’s time for Facebook CEO Mark Zuckerberg and Twitter CEO Jack Dorsey to turn off this toxic tap and completely remove the small handful of individuals spreading this fraudulent misinformation,” they wrote.3

Pharma-funded politicians and pharma-captured health agencies have also relentlessly attacked me and pressured tech monopolies to censor and deplatform me, removing my ability to express my opinions and speak freely over the past year.

The CCDH also somehow has been allowed to publish4 in the journal Nature Medicine, calling for the “dismantling” of the “anti-vaccine” industry. In the article, CCDH founder Imran Ahmed repeats the lie that he “attended and recorded a private, three-day meeting of the world’s most prominent anti-vaxxers,” when, in fact, what he’s referring to was a public online conference open to an international audience, all of whom had access to the recordings as part of their attendance fee.

The CCDH is also partnered with another obscure group called Anti-Vax Watch. The picture below is from an Anti-Vax Watch demonstration outside the halls of Congress. Ironically, while the CCDH claims to be anti-extremism, you’d be hard-pressed to find a clearer example of actual extremism than this bizarre duo.5 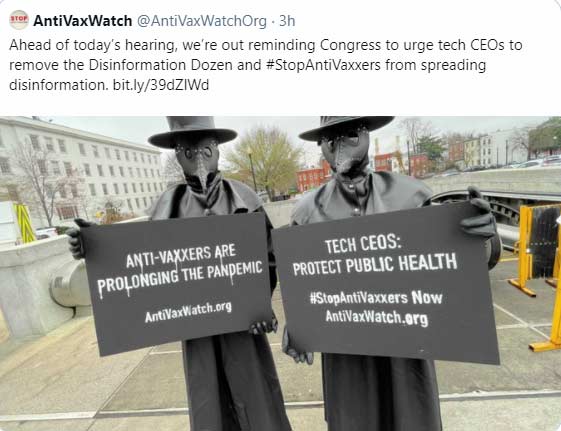 Most recently, Dr. Peter Hotez, president of the Sabin Vaccine Institute,6 which has received tens of millions of dollars from the Bill & Melinda Gates Foundation,7,8,9 — with funds from the foundation most recently being used to create a report called “Meeting the Challenge of Vaccine Hesitancy,”10,11 — also cited the CCDH in a Nature article in which he calls for cyberwarfare experts to be enlisted in the war against vaccine safety advocates and people who are “vaccine hesitant.” He writes:12


“Accurate, targeted counter-messaging from the global health community is important but insufficient, as is public pressure on social-media companies. The United Nations and the highest levels of government must take direct, even confrontational, approaches with Russia, and move to dismantle anti-vaccine groups in the United States.

Efforts must expand into the realm of cyber security, law enforcement, public education and international relations. A high-level inter-agency task force reporting to the UN secretary-general could assess the full impact of anti-vaccine aggression, and propose tough, balanced measures.

The task force should include experts who have tackled complex global threats such as terrorism, cyber attacks and nuclear armament, because anti-science is now approaching similar levels of peril. It is becoming increasingly clear that advancing immunization requires a counteroffensive.”

Why is Hotez calling for the use of warfare tactics on American citizens that have done nothing illegal? In my case, could it be because I’ve written about the theory that SARS-CoV-2 is an engineered virus, created through gain-of-function research, and that its release was anticipated by global elites, as evidenced in Event 201?

It may be. At least those are some of my alleged “sins,” detailed on page 10 of the CCDH report, “Disinformation Dozen: The Sequel.”13 Coincidentally enough, the Nature journal has helped cover up gain-of-function research conducted at the Wuhan Institute of Virology, publishing a shoddy zoonotic origins study relied upon my mainstream media and others, which was riddled with problems.14,15

So, it’s not misinformation they are afraid of. They’re afraid of the truth getting out. They’re all trying to cover for the Chinese military and the dangerous mad scientists conducting gain-of-function work.

You may have noticed our website was recently unavailable; this was due to direct cyber-attacks launched against us. We have several layers of protective mechanisms to secure the website as we’ve anticipated such attacks from malevolent organizations.

What This Means for You

Through these progressively increasing stringent measures, I have refused to succumb to these governmental and pharmaceutical thugs and their relentless attacks. I have been confident and willing to defend myself in the court of law, as I’ve had everything reviewed by some of the best attorneys in the country.

Unfortunately, threats have now become very personal and have intensified to the point I can no longer preserve much of the information and research I’ve provided to you thus far. These threats are not legal in nature, and I have limited ability to defend myself against them. If you can imagine what billionaires and their front groups are capable of, I can assure you they have been creative in deploying their assets to have this content removed.

Sadly, I must also remove my peer reviewed published study16 on the “Evidence Regarding Vitamin D and Risk of COVID-19 and Its Severity.” It will, however, remain in the highly-respected journal Nutrients’ website, where you can still access it for free.

The MATH+ hospital treatment protocol for COVID-19 and the iMASK+ prevention and early outpatient COVID-19 protocol — both of which are based on the use of vitamins C, D, quercetin, zinc and melatonin — are available on the Front Line COVID-19 Critical Care Alliance’s website. I suggest you bookmark these resources for future reference.

It is with a heavy heart that I purge my website of valuable information. As noted by Dr. Peter McCullough during a recent Texas state Senate Health and Human Services Committee hearing, data shows early treatment could have prevented up to 85% (425,000) of COVID-19 deaths.17 Yet early treatments were all heavily censored and suppressed.

McCullough, in addition to being a cardiologist and professor of medicine at the Texas A&M University Health Sciences Center, also has the distinction of having published the most papers of any person in the history of his field, and being an editor of two major medical journals. Despite that, his video, in which he went through a paper he’d published detailing effective early treatments, was summarily banned by YouTube in 2020.

“No wonder we have had 45,000 deaths in Texas. The average person in Texas thinks there’s no treatment!” McCullough told the senate panel.18 Indeed, people are in dire need of more information detailing how they can protect their health, not less. But there’s only so much I can do to protect myself against current attack strategies.

They’ve moved past censorship. Just what do you call people who advocate counteroffensive attacks by terrorism and cyberwarfare experts? You’d think we could have a debate and be protected under free speech but, no, we’re not allowed. These lunatics are dangerously unhinged.

The U.S. federal government is going along with the global Great Reset plan (promoted as “building back better”), but this plan won’t build anything but a technological prison. What we need is a massive campaign to preserve civil rights, and vote out the pawns who are destroying our freedom while concentrating wealth and power.

OUT OF MIND » BREAKING NEWS & HOT TOPICS » THE GREAT DIE OFF » Wow! They Really Do Not Want You All to See Any Vitamin D/CV info!!! Dr Mercola Gets Threats!

» And now I am in Fakebook jail for 24 hours - They really do not want the Vitamin D info made public.
» If hospitals had utilized the Zelenko protocol with intravenous vitamin C and vitamin D, then covid-19-associated deaths would be virtually nonexistent
» Very good info here if you haven't listened.....THE ONE PEOPLE'S TRUST INFO
» Dr. Mercola discusses the FDA
» Breaking: Dr. Mercola is deleting every article on his website of 25 years