Federal Gov’t Telling Facebook to Silence Those With Vaccine Safety Concerns Says Lawsuit Mon May 10, 2021 9:31 am 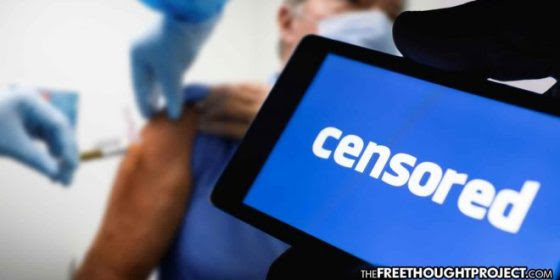 Matt Agorist May 6, 2021
It is no longer a random act — Facebook censorship has become so blatant and massive that they have indefinitely silenced the former president of the United States. Many pro-censorship advocates cheer this on because they dislike the voices silenced by Facebook. They attempt to justify the censorship with the claims that Facebook is a private company and can do what they want, a lawsuit filed against the social media giant says that is not the case.
A lawsuit filed by Robert F. Kennedy Jr. — the chairman of the non-profit group Children’s Health Defense (CHD) — claims Facebook conspires with the federal government to squelch speech which advocates for vaccine safety.
According to the lawsuit, overseen by Senior U.S. District Judge Susan Illston, Facebook started slapping warning labels on content posted on CHD’s Facebook page, including in September of 2020 when the social media giant posted a message directing users to seek “reliable, up-to-date information” about vaccines from the U.S. Centers for Disease Control and Prevention. Facebook also started labeling some of CHD’s content as “false information” based on research by third-party fact checkers, including a link to an article claiming vaccinated children “are more likely to have adverse health outcomes” in May 2020.
Suing Facebook over censorship is an impossible task (trust us, we tried) as the company claims the right to censor or moderate any content they see fit as they own the platform. However, in their new lawsuit, CHD claims the federal government coerced and encouraged Facebook to stifle its speech, transforming a private company’s actions into a state-sponsored directives.
On Wednesday, Facebook filed a motion to dismiss the lawsuit and during that hearing, Judge Illston asked if the government can ever take steps to counter misinformation without running afoul of the First Amendment.
“Let’s say there was something on the internet that says, ‘If you take a Covid vaccine, you’re going to grow a third head.’ That’s clearly not true. Is it OK to not let that be published?” Illston asked.
“I don’t think it’s OK if the government is calling the shot,” CHD attorney Roger Teich replied.
“You think it’s inappropriate for the government to say generally, ‘We’d really like it if all these private social media outlets didn’t publish lies about the Covid vaccine?’ That’s not alright to say that?” asked Illson.
Teich answered that it was the CDC’s “underhandedness” in using Facebook to restrict speech that violates the Constitution.


To show evidence of government / Facebook collusion, Teich cited multiple statements by Zuckerberg, the CDC and “its proxy,” the World Health Organization, declaring that they were “in discussion” and “working together” to reduce the spread of vaccine misinformation.
According to Courthouse News, CHD claims the basis for the lawsuit is substantial given previous incidents:

CHD also cited a February 2019 letter by U.S. Rep. Adam Schiff, D-Calif., to Facebook voicing concern about the proliferation of vaccine misinformation on social media. CHD claims that letter combined with Schiff’s statement during a June 2019 congressional hearing that lawmakers should “make changes to” a 1996 law that shields internet platforms from lawsuits over content posted by users amounts to a “threat” intended to “coerce” Facebook into doing the government’s bidding.
“State action must be found whenever government officials are coercing, inducing or encouraging private parties to do what they themselves cannot constitutionally do,” CHD attorney Jed Rubenfeld said.
Facebook argues that Schiff’s letter merely requested information from Facebook. Citing a recent decision in Daniels v. Alphabet Inc., a case challenging the removal of YouTube videos, Facebook attorney Sonal Mehta argued the plaintiffs can’t show government actors directed Facebook to censor content.
“Nobody said censor CHD or we’ll go after you on Section 230,” Mehta said, referring to part of the 1996 Communications Decency Act that makes internet platforms immune from lawsuits for contest posted by users.
CHD argued that U.S. Magistrate Judge Virginia DeMarchi in San Jose got it wrong when she dismissed Daniels v. Alphabet Inc. on March 31. The plaintiff in that suit argued Schiff and House Speaker Nancy Pelosi had coerced YouTube, owned by Google’s parent Alphabet, into removing objectionable content. DeMarchi dismissed the suit with leave to amend, finding the plaintiff did “not plead any facts suggesting that Speaker Pelosi or Rep. Schiff were personally involved in or directed the removal” of videos.

Rubenfeld said DeMarchi “was not informed of the precedent” when she issued that ruling. “What matters is if they gave the private party the standard of decision. The CDC gives Facebook the standard of decision.”
“And does it matter if what the CDC said is true,” Illston asked.
“It would still be constitutionally protected,” Rubenfeld noted.
After the hearing, Judge Illston did not dismiss the lawsuit and instead took it under submission.
While this lawsuit sets out to show collusion between Facebook and the federal government, it has been widely known for years that Facebook is not private. As we reported earlier this year, Facebook began furnishing the Federal Bureau of Investigation with data on Trump supporters who discussed the events at the capitol on their platform — up to and including their private messages. Through this action the social media giant is acting as a de facto intelligence collecting arm of the US government.
Facebook is more than willing to open up its data mining services for their friends in the federal government — because, as we have stated numerous times, Facebook is not private.
As TFTP reported in 2018, Facebook announced that it partnered with the arm of the government-funded Atlantic Council, known as the Digital Forensic Research Lab that was brought on to help the social media behemoth with “real-time insights and updates on emerging threats and disinformation campaigns from around the world.”
The Atlantic Council is the group that NATO uses to whitewash wars and foster hatred toward Russia, which in turn allows them to continue to justify themselves. It’s funded by arms manufacturers like Raytheon, Lockheed Martin, Boeing, and the United States government.
But this partnership with the state-funded “think tank” is not the only reason Facebook is not private.
From government funded censorship arms to the revolving door of high level bureaucrats who fill the ranks of the oligopolies, the “private company” Facebook concept comes crashing down when taking a closer look. Private-sector firms do not need to be explicitly nationalized to further the establishment’s interests; it’s enough to install their alumni in top regulatory positions. Through these methods, Facebook can put on the façade of privatization while actually acting as deputies for the state but alleviating any constitutional checks in the process.
All the while, whenever the censorship acts in their benefit, half of the masses cheer it on and defend it, keeping resistance at a minimum.
What’s more, as the government hangs the threat of antitrust litigation over their heads, it can force these companies to act in their benefit even without explicit partnerships like that of the Atlantic Council. This appears to be the basis for CHD’s lawsuit.
In fact, prior to the state getting involved in the talks of regulation into big tech, information flowed relatively freely with Facebook only removing racist and violent content. Now, however, as they bend to the will of their partners in the federal government, people like myself find ourselves on 30 day bans for saying “censorship leads to tyranny.”
This is why the answer to the government big tech censorship leviathan lies not in regulation but in boycott. The time is now to get off these platforms who spy on you, ban you, sell you to the highest bidder, and who are tearing society apart. Censorship free platforms exist and are far more user friendly and treat you as the actual customer instead of the sheep they are leading to slaughter. You can check them out here. (Click to Source)