AstraZeneca Woes Persist as Vaccine Side Effects Generate Headlines Tue May 18, 2021 8:36 am 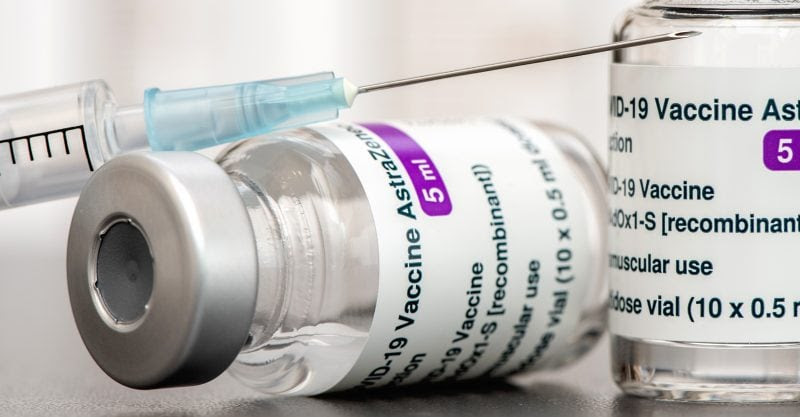 AstraZeneca’s woes continue as blood clot causes man to lose half his intestine, India reports 26 cases of blood clots and Indonesia suspends 45,000 doses following death of 22-year-old man.
AstraZeneca’s COVID vaccine, not yet authorized in the U.S., continues to generate negative press in other countries related to reports of adverse side effects.
As The Defender reported today, musician Eric Clapton said he suffered “disastrous” side effects after getting the vaccine.
Other recent news stories include reports in India of 26 cases of blood clots related to AstraZeneca, and from British Columbia, the report of a 43-year-old man recovering from complications due to a blood clot he developed after taking the vaccine.
In Indonesia, health officials said they suspended a batch of AstraZeneca following the death of a 22-year-old man.
‘Healthy’ man loses half of his intestine
A formerly healthy 43-year-old man from British Columbia is in the hospital recovering from complications following a rare blood clot after vaccination with AstraZeneca, according to CBC News.
Shaun Mulldoon received the shot on April 22. He later developed symptoms including nausea, headache, fever and vomiting. On May 8, Mulldoon observed blood in his vomit and stools, prompting him to seek emergency medical care.
Doctors discovered a blood clot in Mulldoon’s abdomen and performed emergency surgery during which they removed two meters of his small intestine.
Doctors said Mulldoon was a victim of an unusual and severe syndrome tied to AstraZeneca’s vaccine known as vaccine-induced immune thrombotic thrombocytopenia (VITT). Symptoms include severe headache, pain, swollen limbs, nausea, vomiting and shortness of breath.
Mulldoon believes he wasn’t adequately warned of the vaccine’s risks or protected from them. He posted on social media that he wished he’d had more insight into the “worse case scenario.”
“Seventeen days after my vaccine [I] ended up going into emergency surgery to remove over six feet of my small intestine. I had a massive blood clot. Second surgery two days later to remove more. My surgeon told me it was very close.”
[…]
Via https://childrenshealthdefense.org/defender/astrazeneca-vaccine-side-effects-generate-headlines/