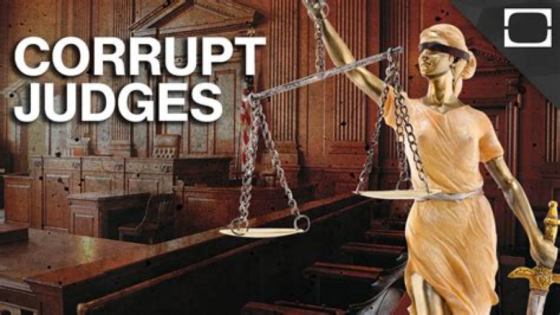 Source: Clarice Feldman
I’ve always had great respect for our legal system. It’s as good as any of which I’m aware. No, I’m not naive. I’m fully aware that every institution depends on the competence and integrity of those involved and that means sometimes decisions are rendered that are wrong — muddy thinking and sometimes corrupt judges; self-seeking prosecutors; incompetent counsel; bad and poorly written laws; false testimony by liars — all contribute now and then to unjust resolutions. But in recent years, my faith has been even more badly shaken by continued and obvious corruption all the way down the line.
This week there are three instances that confirm my belief that something is seriously amiss in our justice system:

James Hodgkinson
Since the press has quickly smothered this story, let me remind you. In June 2017 Hodgkinson, a Bernie Sanders supporter who had posted on Facebook that “Trump is a Traitor. Trump has Destroyed our democracy. It’s Time to destroy Trump & Co,” and had otherwise demonstrated his extreme hostility to Republicans, traveled to Virginia from his home in Illinois, and after learning that the men playing ball there were Republican congressmen, opened fired on them, wounding five people including Congressman Steve Scalise, who nearly bled to death and required multiple surgeries before he could return to Congress.
While Attorney General Merrick Garland claims that white supremacists are the biggest terror threat facing us, and the press regularly hypes such a danger, the truth is that this was the most serious partisan political terrorist act in recent years on our soil.
Now, four years later and hidden as deeply as possible:

The FBI quietly admitted Friday that the 2017 Alexandria, Virginia, baseball field shooting that nearly killed Rep. Steve Scalise has been classified as ‘domestic terrorism’ carried out by a ‘domestic violent extremist ‘targeting Republicans after the bureau previously classified is as ‘suicide by cop.’
The revelation appears in the middle of an appendix on page 35 of a 40-page FBI-DHS report released on Friday titled “Security Strategic Intelligence Assessment and Data on Domestic Terrorism.” In a section describing approximately 85 different “FBI-Designated Significant Domestic Terrorism Incidents in the United States from 2015 through 2019,” the Alexandria baseball field shooting appears, with the FBI categorizing the perpetrator as a “Domestic Violent Extremist” and describing the incident thusly: “An individual with a personalized violent ideology targeted and shot Republican members of Congress at a baseball field and wounded five people. The subject died as a result of engagement with law enforcement.”

In October 2017, Alexandria’s top prosecutor concluding the shooting was terrorism, and both the DHS and the office of the Director of National Intelligence characterized Hodgkinson’s acts as domestic violent terrorism. Only the FBI refused to until now, when it did so as sneakily as possible.
Why the sudden burst of tardy honesty in this limited hangout that ignores the FBI’s role in hiding for the truth for four years? Maybe they see the pendulum swinging back and are covering their backsides. Of course, the FBI’s initial lie and the intervening years make this late and buried volte-face almost worthless. (If you doubt me, ask one of your Democratic friends or any reporter you come across if they know who James Hodgkinson was and why he is newsworthy.)
The January 6, 2021 Videos
Julie Kelly at American Greatness reports that the Capitol is monitored 24/7 by “an extensive system of cameras’ positioned inside and outside the building as well as near other congressional offices on the grounds” and captured more than 14,000 hours of footage between noon and 8 p.m. on January 6. These tapes were made available to “two democratic-controlled congressional committees, the FBI, and the D.C. Metropolitan Police department.” But they won’t make all the tapes available to the defendants or the public, on the shaky ground that it would only provoke more violence.
Almost everything you have seen about the demonstration were snippets captured by social media users and those journalists on the scene. We are being denied the full picture, and the prosecution presents to the court only selected short clips from the videos. The Capitol Police, which launched the lie that Officer Brian Sicknick’s death was the result of a blow on the head by protestors — something the tardily released autopsy report proved false — also may be secreting video from January 5 which would show what preparations had been made for the scheduled demonstration the next day.
Why so secret? As Kelly notes, we already know that Sicknick murder claim was false, as was the claim that this was an “armed insurrection” and the logical explanation for keeping the videos under seal is this: ”It contradicts most if not all claims advanced by Democrats and the media over the past four months.” Claims like Biden’s that this was the worst attack since the Civil War and Attorney General Garland’s comparing this to the Oklahoma bombing. It’s the prosecution clearly relying on fake facts to justify hauling off innocent civilians “to rot in solitary confinement in a fetid D.C. jail” and to scare off anyone who dares protest the election results. The tapes might also let us know more about the cold-blooded murder of unarmed Ashli Babbitt, which the government is stonewalling.
The George Floyd Case
As if the travesty of the Chauvin trial were insufficient, the Department of Justice has weighed in with a criminal case charging him with violating Floyd’s civil rights. (No claim was ever made by Minnesota prosecutors that Chauvin’s conduct had been racist or that he was racist. It’s just a virtue signaling pile-on, in my view. A pile-on to curry favor and career advancement.)
One of the other officers involved in the incident, Thou Thao, filed an interesting pleading this week. He seeks the removal of the Minnesota attorney general from the prosecution of his case. If the facts he alleges are true, this is the minimal remedy for prosecution misconduct he alleges.
He contends that the Hennepin County Coroner Dr. Andrew Baker, who is the only person who performed an autopsy on George Floyd, found that it “revealed no physical findings that support a diagnosis of traumatic asphyxia or strangulation” but that he was coerced by Dr. Roger Mitchell, former medical examiner of Washington, D.C., into changing his report, which three days later said the cause of death was “cardiopulmonary arrest complicating law enforcement subdural, restraint and neck compression,” a finding at odds with his original post-autopsy report.
Dr. Mitchell seems to have considered himself part of the prosecution, threatening to attack Dr. Baker in the pages of the Washington Post if he stuck with his original report. Post trial, Dr. Mitchell continued acting as a prosecution team member, attacking Dr. David Fowler, a Chauvin defense expert.

In the aftermath of the trial, Dr. Mitchell sent a letter concerning Dr. Fowler and his testimony to four public officials:  US Attorney General Merrick Garland, Director of the Center for Disease Control and Prevention Rochelle Wollensky, Maryland Attorney General Brian Frosh, and Director of the Maryland Department of Health Allison Taylor.  In the letter, Dr. Mitchell asked for investigations into Fowler’s medical licensing and past work as a forensic pathologist.  Less than 24 hours after the letter, the Maryland Attorney General’s Office initiated a review of all in-custody death reports produced while Dr. Fowler served as a Chief Medical Examiner in Maryland.
The defense doesn’t provide direct or explicit allegations of the inference it draws, but the allegation is that Dr. Mitchell coerced Dr. Baker to alter his final autopsy report by threatening him with professional reprisals if Dr. Baker did not include “neck compression” as a contributing factor to Floyd’s death.  Dr. Mitchell made it clear in his first call after Dr. Baker’s preliminary report ruled out traumatic asphyxiation as a cause of death that he disagreed with Dr. Baker — even though Dr. Mitchell was not involved in the autopsy and had no access to any of the autopsy materials.  The motion contends the contents of both conversations, and Dr. Mitchell threatening to publish an Op-Ed in the Washington Post critical of Dr. Baker amounted to “coercion” under the law, and that the defense should have been provided with evidence of the contacts between Dr. Baker and Dr. Mitchell given Dr. Mitchell’s connection to the prosecution evidenced by the November 5 meeting with four members of the prosecution team.

If, indeed, the prosecution was aware of Dr. Mitchell’s coercive behavior toward Dr. Baker and the latter changed his finding as a result of that behavior, the prosecution had an obligation to turn over that exculpatory evidence to the defense. As for Dr. Mitchell, on January 29 of this year, Howard University College of Medicine named him Chair of their pathology department.
To comment, you can find the MeWe post for this article here.

» The System Is So Corrupted and Rigged: The Coming Financial Crisis Will Be The Biggest & Quickest For The History Books
» The British Crown runs the U.S. legal system
» Retired Arizona Judge Reveals Corruption in Legal System
» Federal Tax Case Shows Evidence the U.S. Legal System is a Fraud
» Corrupted Justice Trailer