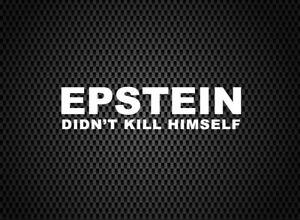 May 22, 2021
Epstein jail guards get plea deal: No jail, 100 hours of community service
By Thomas Lifson

If there was a conspiracy to assassinate a man who knew compromising information about the power elite, two of the lowest-level conspirators are getting away with no jail time.  The two prison guards who allowed Jeffrey Epstein to die with nobody checking up on his safety (despite having been on suicide watch) are getting a slap on their wrists: 100 hours of community service and six months of [url=https://www.rothdavies.com/criminal-defense/frequently-asked-questions-about-criminal-defense/bond/what-pretrial-supervision-or-pretrial-services-and-how-does-it-work/#:~:text=Pretrial supervision is a level,that person being allowed bond.]pretrial supervision[/url].  This seems a very light penalty, considering that they falsified documents attesting to their carrying out the duties that they neglected, and the profound consequences of their perjurious neglect of duty.  Public confidence in the integrity of the Bureau of Prisons and the entire justice system has been tanked.
There is a faint ray of hope, however.  According to a letter submitted to the court seeking approval of the arrangement, the two guards, Michael Thomas and Tova Noel,

Twitter screen grab.
"will cooperate with a pending Department of Justice Office of Inspector General review by providing truthful information related to their employment by the Bureau of Prisons, including about the events and circumstances described in the Indictment."
Their cooperation will be enforced because the plea is a "deferred prosecution," meaning that if their cooperation is deemed inadequate, they can be prosecuted to the full extent of the law, likely meaning prison time.  But are the prosecutors in the Southern District of New York really interested in finding out if someone took advantage of (and possibly encouraged) the guards' negligence to assassinate Epstein, as so many believe?  We have been told that Epstein had extensive video surveillance of the activities of his guests and that his New York home was searched.  Why has there been no sign of criminal prosecution of sex with underage girls, as has been almost universally assumed to be taking place at his mansion?
The guards may have benefited from consideration of their state of overwork due to short staffing at the Manhattan facility.  One was on a second consecutive eight-hour shift while the other had worked mandatory overtime five days in a row.  The prosecutors are not pushing a narrative that would embarrass their fellow Justice Department colleagues at the Federal Bureau of Prisons.

And that sort of self-protective instinct among federal employees, avoiding embarrassment, could extend to letting sleeping dogs lie when it comes to getting to the bottom of Epstein's activities with the rich, powerful, and famous.
A few years ago, I would have been mildly hopeful that the two guards would spill the beans to prosecutors if Epstein didn't kill himself and there was some sort of conspiracy that disabled security cameras and kept the guards away as an assassin killed him.  But after witnessing the behavior of the DOJ during the Trump presidency and after, I have no faith whatsoever in the integrity of its prosecution decisions.
To comment, you can find the MeWe post for this article here.

https://www.americanthinker.com/blog/2021/05/epstein_jail_guards_get_plea_deal_no_jail_100_hours_of_community_service.html
Thanks to: https://www.americanthinker.com
Epstein’s Cell Guards Admit To ‘Falsifying Records,’ Cut Deal To Avoid Jail
Date: May 22, 2021Author: Nwo Report
Guards admitted “that they ‘willfully and knowingly completed materially false count and round slips regarding required counts and rounds.'”

The prison guards tasked with monitoring deceased finance mogul and convicted pedophile Jeffrey Epstein at the time of his death in a New York jail have agreed to a plea deal with federal prosecutors in which they admit to falsifying records from that night, in exchange for community service and no jail time.

Prison workers Tova Noel and Michael Thomas kept logs that indicated they made the required wellness checks on Epstein on the night of his death, which is shrouded in controversy. After being charged with falsifying records in 2019, the guards admitted this week “that they ‘willfully and knowingly completed materially false count and round slips regarding required counts and rounds.’”

The Associated Press reported Friday, “As part of the deal with prosecutors, they will enter into a deferred prosecution agreement with the Justice Department and will serve no time behind bars, according to a letter from federal prosecutors that was filed in court papers Friday. Noel and Thomas would instead be subjected to supervised release, would be required to complete 100 hours of community service and would be required to fully cooperate with an ongoing probe by the Justice Department’s inspector general, it says.”

As National File previously reported, Bill Gates has been accused of becoming friends with Epstein in hopes to secure a Nobel peace prize:
Now, a report from The Daily Beast claims that Gates told board members at The Bill & Melinda Gates Foundation that his friendship with Epstein was just motivated by the hope that Epstein would facilitate a Nobel Peace Prize for the Microsoft founder.
“Gates hoped the well-connected pervert could help him secure the Nobel Peace Prize,” the outlet reported, attributing the information to a “former Gates Foundation employee”. The Daily Beast continues, “‘This person said members of the foundation’s communications team were alerted to Gates’ relationship with Epstein and were told it “was a maneuver to try to get himself a Nobel Peace Prize.’ They said the tech mogul had even kept some employees on call on prize day in years past just in case he was awarded the distinction.”
He [Gates] thought that Jeffrey would be able to help him, that he would know the right people, or some kind of way to massage things, so he could get the Nobel Peace Prize, which is what Bill wants more than anything else in the world,” The Daily Beast reports, now identifying the former employee as a “staffer”.