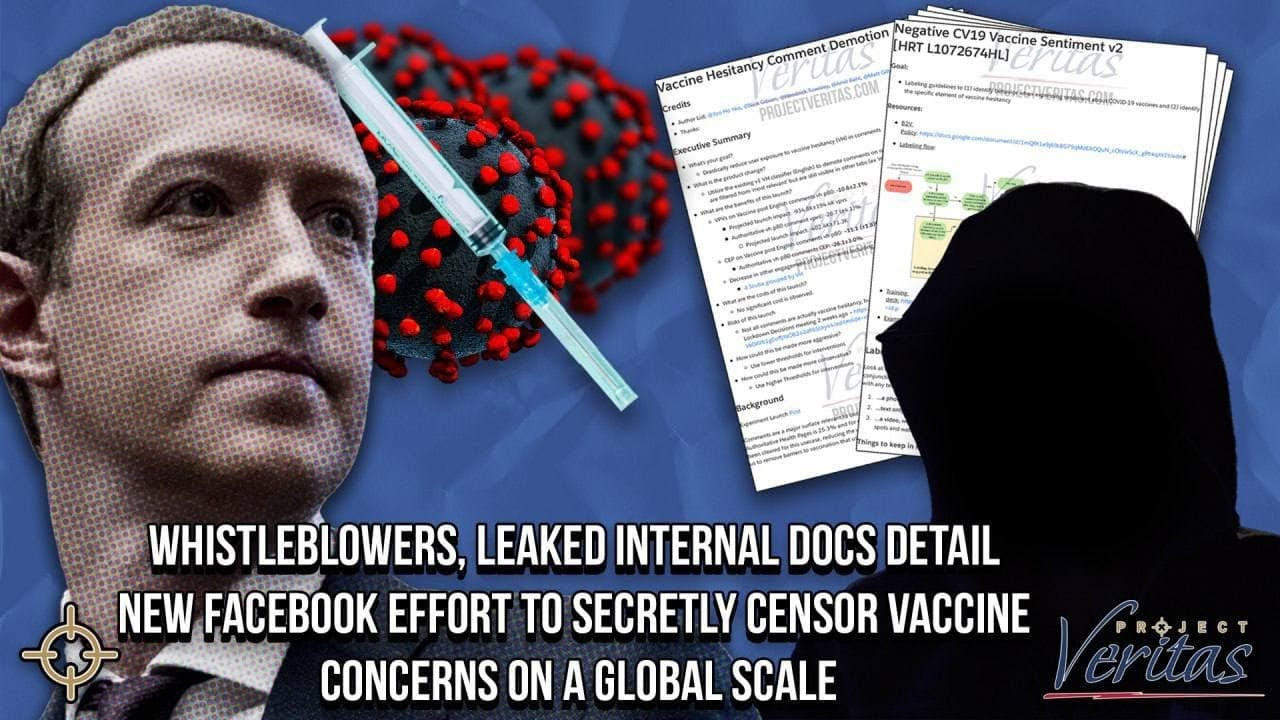 
This may be the most hair-raising Project Veritas investigation I’ve seen to date.
Two Facebook whistleblowers have come forward to describe an effort to remove, down-rank and demote even the vaguest hint of “vaccine hesitancy” on the Big Tech platform, in such a way that can only be described as Orwellian beyond one’s wildest dreams and many of you already know this because you have experienced it firsthand.
Facebook has established an extremely nuanced and robust algorithm to detect “vaccine hesitancy” in order to “reduce exposure” to it and to prevent its spread among its billions of users. This is done by assigning a “VH” score or “vaccine hesitancy score” to user comments, which will demote the comment or leave it alone, based on the score assigned to the comment or content.
According to internal documents leaked by the whistleblowers, it doesn’t matter if the comments are true, what matters is if they diverge from the approved narrative. Comments diverging with the approved narrative are to be “suppressed in any way possible”, according to Whistleblower #1.
The test is currently being run on 1.5% of Facebook and Instagram’s 3.8 billion users and it is overseen by some of Facebook’s senior personnel.
Project Veritas’ James O’Keefe asks Whistleblower #1, “Where do you think this is headed? Does it get any worse than this?” and he responds that if there is no pushback and the wider public accepts this, Facebook won’t stop at doing this just with vaccines, this scoring system will be applied to literally every topic and how it relates to the approved narrative.
Whistleblower #1 says that at least 25% of his colleagues at Facebook share his concerns that the vaccine hesitancy algorithm is morally wrong and his worst fear is that the policy is going to keep expanding until anything can violate it.
He says, “What would happen if this was scaled larger and scaled to Twitter and the Internet as a whole is way worse than anything that could happen from me getting fired from my job…It’s about more than me. It’s about really everyone in the world.”
Whistleblower #2 describes what Facebook is doing to “Having a relationship with somebody that’s controlling and abusive…an abusive partner not allowing their spouse to speak out about things that are going on in their marriage or in their relationship and limiting their voice. It’s very damaging in that sense…If you think about this logically…it’s very incriminating in my opinion.”
This is especially so, given the internal Facebook executive video conference leaked by Whistleblower #2 last July, in which CEO, Mark Zuckerberg openly admitted to having concerns about the long term side effects of “modifying people’s DNA and RNA,” which would have led to his suspension from his own platform, had it been posted publicly.
Whistleblower #2 says, “They want to build a community where everyone complies, not where people can have open discourse and dialogue…” and he says, “I almost feel like there’s outside sources pressuring Mark – or could be…and you look at the video with Fauci…Mark doesn’t seem too pleased…”
When O’Keefe asks Whistleblower #2 what his message would be to any future whistleblowers at Facebook, he says, “Go ahead and do it…There’s a lot of blowback to telling the truth and…you are going to going to receive blowback, but just weigh it out…can you live with yourself for the rest of your life if you work at Facebook and you knew about this?…
“I’m a father, so…I fear for my family, for my children’s safety. But I also understand that…as I told my wife, I have to do something, when it comes to to standing up for a world I want my children to live in. I don’t want to leave them a world to where they don’t have these liberties, these personal securities, to where they can willingly make their own medical decisions between them, their doctor and those closest to them…That’s not something I could do and it came down to the point where I had to make a decision to do what was right.”

Expressing concern “about being pressured to vaccinate by a vaccine registry” or the subject of “vaccine passports” also ranks comments as Tier 3 “Vaccine Hesitancy,” to be “filtered” by Facebook.

Project Veritas Is Recognized As a Tax Exempt Organization Under Section 501(C)(3) of the Internal Revenue Code. Your Donations Are Tax Deductible As Allowed by Federal Law and the Laws of Various States.