‘I am completely drained, no energy and my whole body hurts with sore and weak joints…’

Source: Adan Salazar
British model Stephanie Dubois died from a blood clot days after receiving AstraZeneca’s Covid-19 vaccine.
According to Greek media, Dubois, 39, suffered a “serious thrombotic episode” on May 14 and needed to hospitalized after receiving her first Covid dose on May 6.

“It is understood she suffered a brain hemorrhage and was in a coma before she died on Saturday afternoon,” reports the Cyprus Mail.


Days after taking the jab, Dubois, who health officials said had no underlying health conditions, reportedly described feeling under the weather.
“So I had the vaccination today! I hate needles, today was no exception . . . And now I feel horrendous . . . pizza and bed for me,” she wrote on Facebook.
However, her conditioned soon worsened; her body began convulsing involuntarily and she began having difficulty breathing.
Dubois documented the effects on Facebook, saying she believed she was coming down with Covid-19.
“Woke up feeling fine and then within an hour I had fully body shakes, all my joints seized and I was struggling to breathe and was cold to the bone with a persistent headache and dizziness,” Dubois wrote, adding, “I was convinced I’d come down with Covid!”

Later that day, Dubois posted an update theorizing the Covid vaccine might have something to do with her condition.


“I have had my bloods done and there is definitely something off as my white blood cell count is high, but they don’t know what it is causing it,” she documented.
“The doctors here are great and will be checking in with me on Sunday to see how I am doing.”

“Maybe I’m having a prolonged reaction to my Covid jab last week, or maybe those side effects affected my immune system and I’ve caught something else in the process,” she wondered.
“I am completely drained, no energy and my whole body hurts with sore and weak joints… but it is better than it was this morning. This morning really scared me to be honest.”
The European Medicines Agency will investigate the death, according to Newsweek.
Oxford-AstraZeneca’s Covid vaccine rollout continued unabated despite over a dozen European countries pausing distribution over reports of blood clots, not to mention several deaths in Denmark, Italy, Austria, South Korea and Germany.
Meanwhile, the US FDA is still deciding whether to grant AstraZeneca’s vaccine emergency-use authorization like the Pfizer, Moderna and Johnson & Johnson jabs. 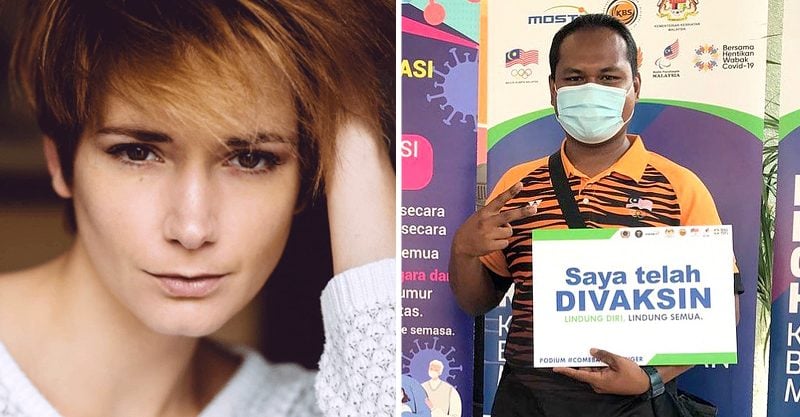 By  Megan Redshaw
British fashion model Stephanie Dubois suffered a blood clot days after vaccination with AstraZeneca’s COVID vaccine, while a young two-time Olympian died 10 days after receiving Pfizer’s vaccine.
British fashion model Stephanie Dubois died from a blood clot days after receiving the AstraZeneca COVID vaccine in Cyprus, a health official said Monday.
Dubois, 39, suffered a “serious thrombotic episode” after receiving her first dose of the vaccine on May 6, Newsweek reported. She had no underlying health conditions according to health officials at the hospital in Nicosia, where she was hospitalized May 14, after experiencing breathing issues.
The fashion model later suffered a brain hemorrhage and was in a coma before she passed away May 21.
Dubois’ death will be investigated by the European Medicines Agency (EMA), said a Cypriot health service spokesperson, Charalambos Charilaou.
Dubois received her first dose on May 6 and posted on Facebook: “And now I feel horrendous … pizza and bed for me.”
In a Facebook post on the morning of May 14, Dubois wrote: “Woke up feeling fine and then within an hour I had full body shakes, all my joints seized and I was struggling to breathe and was cold to the bone with a persistent headache and dizziness.”
By May 19, Dubois was reported to have gone into a coma and “was not expected to come out of it,” according to a friend, Andrew Powers, The Times reported.
Three other thrombosis incidents were reported in Cyprus following vaccinations, two of whom also received the AstraZeneca vaccine. The cases were part of 40 serious side effects reported that may be linked to COVID vaccination, which were referred to the EMA.
CHD Calls on FDA to Take COVID Vaccines Off the Market – Submit a Comment
In its latest guidance released May 21, the EMA advised AstraZeneca should not be given to anyone who developed blood clots with low blood platelets after receiving one dose of the vaccine.
On April 7, European regulators confirmed a “possible link” between AstraZeneca’s COVID vaccine and “very rare” blood clots, but concluded the benefits of the vaccine still outweigh the risks.
The EMA did not recommend restricting use of the vaccine based on age, gender or other risk factors, but did say cases of blood clotting after vaccination “should be” listed as a possible side effect, according to a statement issued by the agency’s safety committee.
27-year-old Olympian archer dies after Pfizer vaccine
Two-time Olympic archer Haziq Kamaruddin, died at the age of 27 on May 14, after collapsing at his home days after receiving Pfizer’s COVID vaccine. Kamaruddin died of a blocked coronary artery, the Health Ministry said Saturday, adding there was no evidence of a link to the vaccine.
There are multiple reasons a coronary artery can become blocked, including by a blood clot, according to Yale Medicine. As The Defender reported last month, all three vaccines authorized in the U.S., including Pfizer, can potentially cause blood clots.
[…]
Via https://childrenshealthdefense.org/defender/stephanie-dubois-malaysian-olympic-archer-die-covid-vaccines/