OUT OF MIND » BREAKING NEWS & HOT TOPICS » THE GREAT DIE OFF » Best States to Move to if You Hate Mask Mandates, Lockdowns and Vaccine Passports

Best States to Move to if You Hate Mask Mandates, Lockdowns and Vaccine Passports

Best States to Move to if You Hate Mask Mandates, Lockdowns and Vaccine Passports Fri May 28, 2021 9:36 am 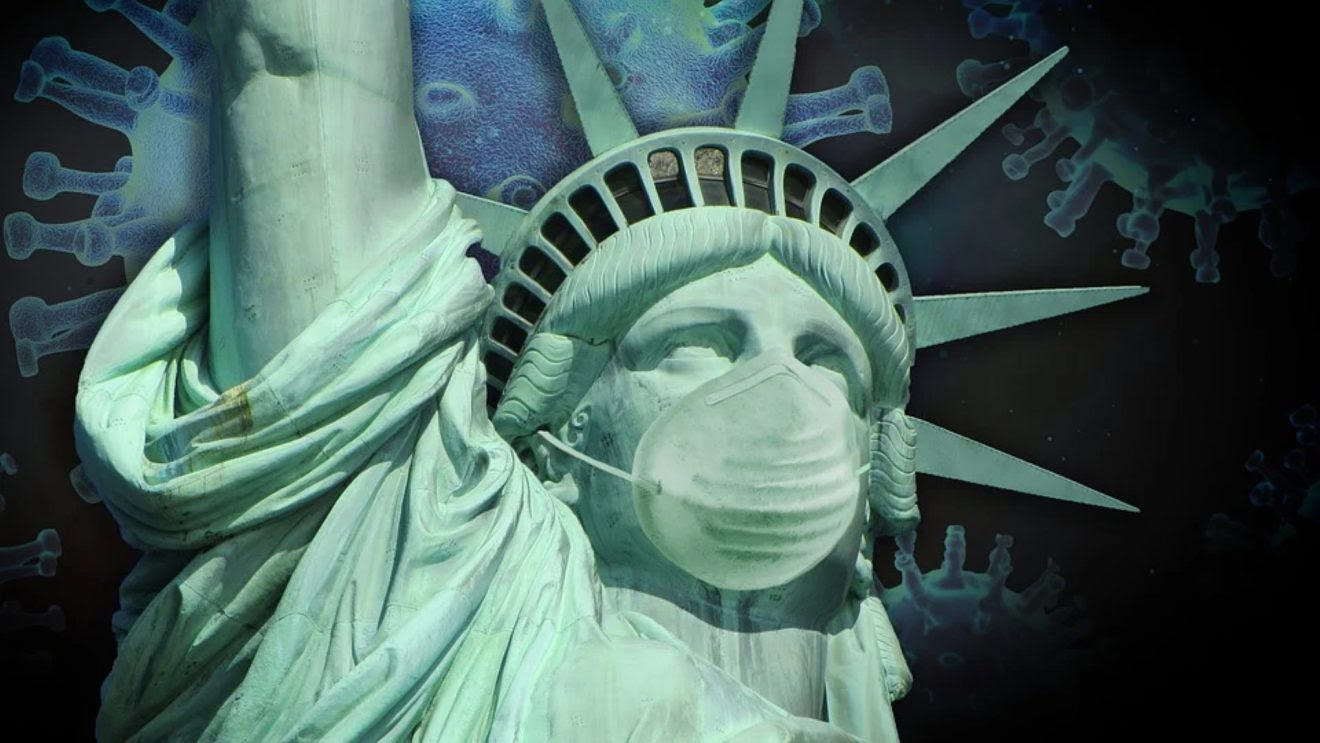 Best States to Move to if You Hate Mask Mandates, Lockdowns and Vaccine Passports
by Brenda of  The Well Fed Homestead
May 24, 2021 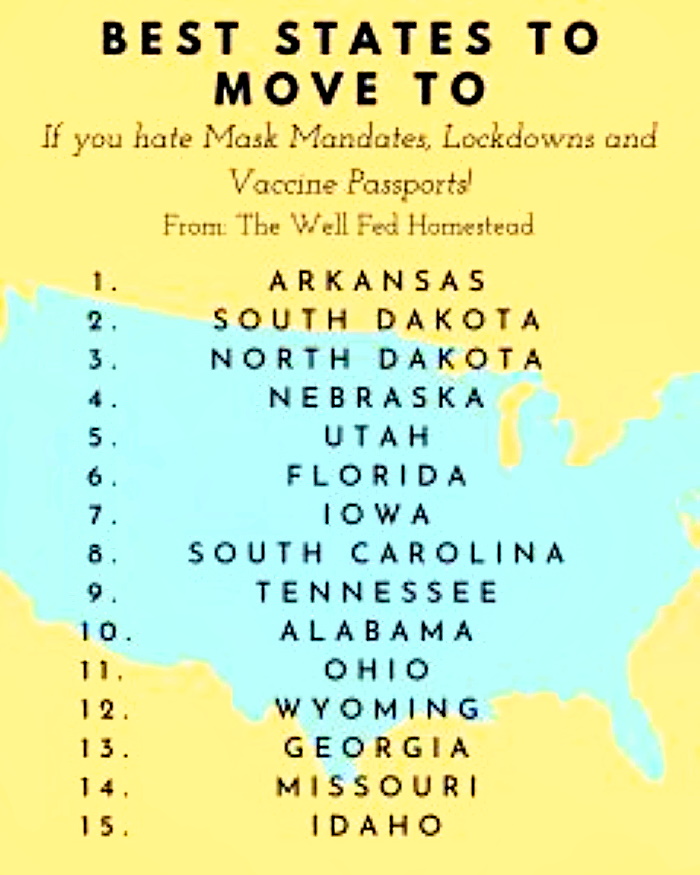 When we were leaving Oregon and researching states, we didn’t have the advantage of knowing how crazy or sane each state’s governor truly was. You guys, who are considering a move now, get to see which governors have handled the last year the best. I’m really glad we left Oregon, seeing how Kate Brown has treated Oregon residents and business owners.
Let’s be clear–I was not a fan of lockdowns or face covering mandates, at all. I think people need to breathe and should be able to make their own choices about whether they want to wear a mask or not, and whether they want to stay home or not. I think that vaccine passports will lead down a terrible, discriminatory, ugly path and I pray that our country does not implement them.
Assuming you’re still following and want to know more, let’s dive in and figure out which ones handled lockdowns, masks, and this whole vaccine passport idea the BEST, and WORST (ahem, Oregon). Also, it’s important to note how the stay-at-home-orders impacted people’s livelihoods, so I have included the current unemployment rate for each state.
While many do not want to admit that the virus restrictions have been political–it is clear, when you research the facts, that this has been very political. In general, states with Democrat governors had more restrictions and states with Republican governors had less. To show this point, I have marked states with Republican governors in red and Democrat governors in blue.
By the way, for the naysayers who believe we should lock down, wear masks and check everyone’s vaccination status from now until the end of time, I’ll also share the deaths per million residents of each state. In my opinion, the states that promoted freedom, don’t exactly look like they have “blood on their hands,” as some would say (talk about extreme rhetoric!). Okay, moving on…
The States, In Order (Best to Worst)
Based on scores from the data below, with COVID-19 Deaths per million listed next to every state. States at the top were the least restricted states and also the states that lost the least businesses and have the smallest unemployment numbers. The states at the bottom were the most restricted states and also have the highest unemployment rates and the highest number of businesses lost.
**Please Note** The COVID death counts did NOT increase because a state was less restrictive. NOR did COVID death counts decrease because a state locked down longer, shut down churches or banned HCQ.
**Also Note** When people say that the lockdowns and masks and banning of life-saving meds was “not political,” they’re lying. Look at the red vs blue states. Republican governors, in general, cared about freedom and Democrat governors, in general, ceased the opportunity to control their people. Again, their extreme control did not prevent deaths, which was what they told us they were doing. This has definitely been political.

Our state, Virginia, isn’t doing so hot! BUT! We moved from Oregon (#48) to Virginia (#37), so at least we’ve moved up in the world!
Where do you want to live, now?
THE DETAILS
If you’d like to know how each state ranked in each area, here are the details! This is a very long post!

Nearly every state ordered restaurants and “non-essential” businesses to shut down. This title, “Non-essential,” was also used in World War II–by Hitler and the Nazis. There was no place for this kind of government overreach and these measures have caused many small businesses to close down.
The Only States that Did Not Shut Down Restaurants
South Dakota, Nebraska (Restricted but not shut down)
States that Did Not Shut Down “Non-Essential” Businesses
Arkansas, Nebraska, South Dakota, Utah, Wyoming

Arkansas
Arkansas Governor Asa Hutchinson said at a news conference on March 16 that restaurants can remain open “on their own choosing and based upon market demand”. Source
California
“For outdoor activities,” what Ghaly called “mega outdoor events” with attendance of more than10,000, he announced, “We are recommending that those operators have a system to verify vaccination or verify.” Operators of those events can also “give that person an option to come into the event and wear a mask.” Source
Delaware
“There are challenges with respect to mostly enforcement because you don’t know who’s vaccinated or not,’’ he said. “We’re not going to be in the business of asking people for a so-called vaccine passport.”
Source
Iowa
“Here in Iowa, we will protect Iowans from being forced by tyrannical governments to inject their body with chemicals that they may or may not wish to have,” state Sen. Jake Chapman (R), said, according to the Register.”
Source
Massachusetts
Regarding Vaccine Passports:
“I really think the focus for us and for the commonwealth generally should be on getting everybody who wants to get vaccinated vaccinated as quickly as we possibly can. There’s plenty of time to talk about some of this other stuff,” Baker said during the press briefing in Revere.”
Source
New Jersey
“I was asked about the vaccination passport, if I was open-minded to it at one point. I said ‘Yeah, that’s something that I’d be open minded to,’” said the governor. “I don’t want anyone to think that we’re up here pounding the table, to think that this is something we unquestionably support. The CDC is the place that that discussion and that guidance has to come from.”
Source
North Dakota
“Hoverson said that “The mask is a part of a larger apparatus of a movement of unelected, wealthy bureaucrats, who are robbing our freedoms and perpetuating lies.” He also reportedly said, “Our state is not a prison camp.”
Source
Oregon
“In order to meet the CDC guidance that someone who is vaccinated does not need to wear a mask, or keep their distance, we need to know who is vaccinated. We need someone to disclose their vaccination status so they can remove their mask in a setting and not keep their distance,” Dr. Sidelinger said.”
Source
Tennessee 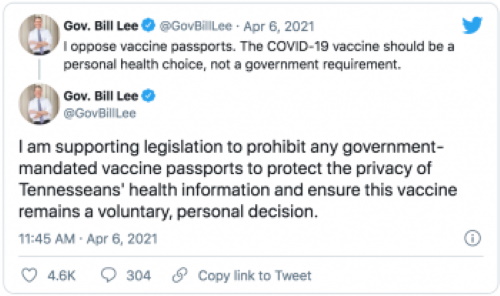 Source
Still considering a move? Where would you like to move?

OUT OF MIND » BREAKING NEWS & HOT TOPICS » THE GREAT DIE OFF » Best States to Move to if You Hate Mask Mandates, Lockdowns and Vaccine Passports

» People around the world rally against lockdowns, vaccine mandates and vaccine passports
» 10,000 tractors/trucks have blocked roads in Germany as protest against vaccine mandates, passports, lockdowns ..
» Only 4 US states still have mask mandates
» Italians Burn Their Vaccine Passports To Spite Their Government Mandates
» Tens of Thousands in Bern, Switzerland Reject Vaccine Passports, Mandates