OUT OF MIND » THE INSANITY OF REALITY » ILLUMINATI AGENDA & WORLD DOMINATION » SECRET SOCIETIES: ‘The Illusion of Control’, The Priory of Sion & The Illuminati

SECRET SOCIETIES: ‘The Illusion of Control’, The Priory of Sion & The Illuminati

The Illusion of Control: The Priory of Sion & the Illuminati – By Robert Guffey 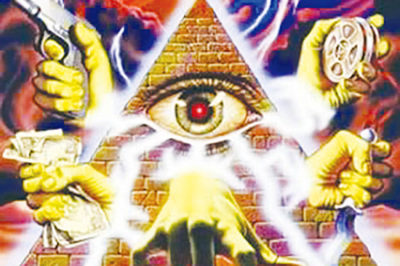 The Priory of Sion

As anybody who has read the best selling novel The Da Vinci Code already knows, the Priory of Sion is said to be an ancient secret society that has controlled world affairs for centuries. In truth, the man who started the Priory of Sion in 1956 was a rightwing confidence man named Pierre Plantard who was eventually imprisoned over allegations concerning fraud, embezzlement, and child corruption. His reputation as a charlatan was established early on. A French police report in 1941 states:

Plantard, who boasts of being in contact with numerous men of politics, appears to be one of those illumines and pretentious young people, heads of more or less fictitious groups, wanting to give themselves importance and who take advantage of the current movement in favour of youth to attempt to get themselves taken into consideration by the government.3

Plantard loved to weave tall tales about the Priory, boasting an impressive list of Grand Masters that stretched all the way back to the fourteenth century, perhaps even earlier. Alchemists like Nicolas Flamel and Robert Fludd, scientists like Leonardo da Vinci and Isaac Newton, and accomplished novelists like Victor Hugo and Jean Cocteau, were all High Muckety-Mucks at one point or another, according to the good Monsieur Plantard.
Plantard even claimed the Priory of Sion linked back to the Knights Templar and the Crusades. The Priory, however, is actually far younger. Researchers Lynn Picknett and Clive Prince determined that although the Priory “was established in 1956, it draws almost exclusively on late-nineteenth-century material for its history and folklore, suggesting that whoever the shadowy figures were behind Plantard and the Priory, they belonged to that era.”4 After a great deal of detective work, Picknett and Prince determined that a group of French synarchists were the true architects of the Priory of Sion myth.
The concept of synarchy was developed in the late nineteenth century by Joseph Alexandre Saint-Yves as a response to the anarchist movement so prevalent in Europe at that time:

Saint-Yves’s concept of synarchy was essentially a reaction to the rise of anarchy and therefore its opposite – a highly ordered method of government based on what he believed were universal laws and principles. Everything and everybody has its place and purpose; harmony is achieved by keeping to that place and fulfilling that purpose, whereas any circumvention of those natural laws leads to disaster. Everyone has to remain in his or her allotted station in life. (Papus likened the individual’s relationship to a nation or race to the cells’ relationship to the body. As each was preordained to fulfil a specific function, attempting to do anything else would only cause problems for both the individual and the organism as a whole.)

His works outlined an ambitious, visionary program for establishing synarchy in France and beyond. Each state must be highly organised at every level, with everyone in his or her own specific place; otherwise anarchy would triumph. Challenging one’s status would not be tolerated.5

Picknett and Prince choose to believe the synarchist influence, and therefore the Priory influence, has been influential to this very day in forging a European Union.
Though Picknett and Prince both admit the Priory story is a hoax, they suspect it is a hoax “in the same way that intelligence deceptions are hoaxes.”6 They believe the Priory is a mask the synarchists have worn over the years for various reasons. In 1956 the purpose was to act “as a front for groups plotting Charles de Gaulle’s return to power […]. Later, in the 1960s, it was revived with a new purpose, a misinformation exercise” that popularised the myth of an existing bloodline of Jesus Christ for the purpose of diverting “other esoteric groups from seeking out certain archives.”7
The truth of Picknett and Prince’s theories is impossible to know; some simply do not wish to know. For many people, the truth does not matter. After all, the theories of Picknett and Prince were colourful enough to pique the imagination of Dan Brown, who based his novel The Da Vinci Code, in part, on their 1997 book The Templar Revelation: Secret Guardians of the True Identity of Christ.
Dan Brown and Plantard are very similar in some ways. Brown, like Plantard, has a vivid imagination and a gift for telling an exciting tale. Plantard, like Brown, employed almost every significant historical figure and esoteric organisation, such as the Knights Templar, in order to make his myth seem palatable. But if Plantard was right, that the Priory links all the way back to the Knights Templar, the connection is a tenuous one. The two organisations are as much connected as a severed tail is to a panicked lizard.

The same can be said of the Illuminati, a secret society formed in Germany by the dean of the faculty of law at Ingolstadt University on May 1, 1776. According to Masonic historian Manly P. Hall, Weishaupt’s secret society sprang out of the academic setting in which he worked every day: “There can be no doubt that Adam Weishaupt found himself in the midst of scholastic plotting and counterplotting. To him, the campus of the university was a microcosm of the world, and the conspiracies which flourished in the school symbolised the larger strife between reactionary and progressive factions.”8
Anyone who has had the slightest contact with modern academia can sympathise with Weishaupt’s position. The struggle between conservative and progressive factions has never been more Machiavellian than now. In this context I am by no means using the traditional political terms of “conservative” and “progressive.” In fact, the conservative factions in academia are, for the most part, represented by people who would be considered “liberal” by the outside world; alas, their liberal views do not extend toward their students. They are authoritarians who wish to control the minds of their students with extreme regimentation and useless rules. It is this same type of authoritarianism that Weishaupt found himself up against in the 1700s.
Two Freemasons named Baron Adolf von Knigge and Johann Joachim Christoph Bode helped Weishaupt form the Illuminati for the purpose of combating this authoritarian strain, not only in academia but in German society in general. The Illuminist Order never boasted more than two thousand members at a time, but these members were the brightest and most influential intellectuals of the day. However, their political goals did not constitute the entire purpose of the organisation; these goals were merely a natural outgrowth of their esoteric philosophies. As Hall states:

Certainly there was an undercurrent of things esoteric, in the most mystical sense of that word, beneath the surface of Illuminism. In this respect, the Order followed exactly in the footsteps of the Knights Templar. The Templars returned to Europe after the Crusades, bringing with them a number of choice fragments of Oriental occult lore, some of which they had gathered from the Druses of Lebanon, and some from the disciples of Hasan Ibn-al-Sabbah, the old wizard of Mount Alamut.

If there was a deep mystical current flowing beneath the surface of Illuminism, it is certain that Weishaupt was not the Castalian Spring […]. Weishaupt emerged as a faithful servant of a higher cause. Behind him moved the intricate machinery of the Secret Schools. As usual, they did not trust their full weight to any perishable institution. The physical history of the Bavarian Illuminati extended over a period of only twelve years. It is difficult to understand, therefore, the profound stir which this movement caused in the political life of Europe. We are forced to the realisation that this Bavarian group was only one fragment of a large and composite design […].

The ideals of Illuminism, as they are found in the pagan Mysteries of antiquity, were old when Weishaupt was born, and it is unlikely that these long-cherished convictions perished with his Bavarian experiment. The work that was unfinished in 1785 remains unfinished in 1950.9

Indeed, just as it remains unfinished today. Like a magician waving a handkerchief in order to distract his audience from the shenanigans occurring in the shadows, the Secret Schools sometimes find it necessary to feed bread and circuses to the profane in order to satiate their uncontrollable need to feel in control at all times.
Bread and circuses can take many forms. Recently, they’ve taken the form of pulp best sellers and multi-million dollar movies. In the past, they took the form of sermons and impressive stained glass windows and bells ringing atop church steeples all across the countryside. The opium of the masses is constantly morphing and adapting to the times.
Control is controlled by its need to control.

OUT OF MIND » THE INSANITY OF REALITY » ILLUMINATI AGENDA & WORLD DOMINATION » SECRET SOCIETIES: ‘The Illusion of Control’, The Priory of Sion & The Illuminati

» History of SECRET SOCIETIES! Knights Templar, Illuminati, Assassins, Freemasons...
» The Secret Society Control Network - David Icke | NWO - Illuminati - Archons
» Aug Tellez: Secret Space Program, Solar Warden, The Unveiling, Secret Societies, Higher Awareness
» Top 10 MYSTERIOUS Secret Societies
»  The Secret Order of the Illuminati.....This whole thing with the Illuminati and a Shadow Government may be unreal to many people, but stay with me for a while and give it a chance