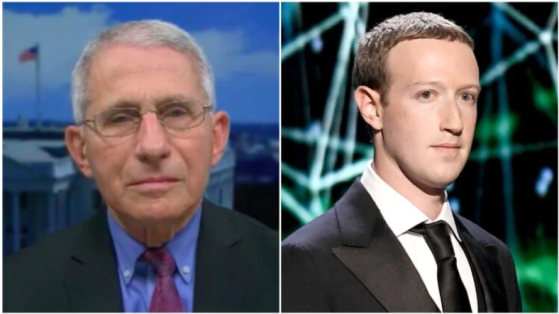 Source: Nworeport
New email disclosures obtained under the Freedom of Information Act (FOIA) have shown how National Institute of Allergy and Infectious Diseases (NIAID) director Dr. Anthony Fauci colluded with Facebook CEO Mark Zuckerberg to implement Orwellian thought control from the beginning of the COVID-19 pandemic.
During one exchange in Feb. 2020, Zuckerberg asked Fauci about the best ways he could help with the synthesizing and mass distribution of a COVID-19 vaccine, offering to throw money and resources to the project through his foundation. https://lockerdome.com/lad/13522415460496486?pubid=ld-dfp-ad-13522415460496486-0&pubo=https%3A%2F%2Fbigleaguepolitics.com&rid=bigleaguepolitics.com&width=788
“I was glad to hear your statement that the covid-19 vaccine will be ready for human trials in six weeks. Are there any resources our foundation can help provide to potentially accelerate this or at least make sure it stays on track?” Zuckerberg asked Fauci.
“If we start in April ( ~6-7 weeks from now ) with a phase 1 trial of 45 subjects, it will take another 3-4 months to determine safety and some immunogenicity. The next step is phase 2 for efficacy. We may need help with resources for the phase 2 trial if we do not get our requested budget supplement. I believe that we will be OK. If this goes off track, I will contact you. Many thanks for the offer. Much appreciated,” Fauci said in response.
A couple weeks later, Zuckerberg approached Fauci again with a proposal to do propaganda on his behalf in order to make sure the public was properly conditioned with fear over the COVID-19 virus.
“I wanted to send a note of thanks for your leadership and everything you’re doing to make our country’s response to this outbreak as effective as possible. I also wanted to share a few ideas of ways we could help you get your message out, but I understand you’re incredibly busy, so don’t feel a need to reply unless these seem interesting,” he wrote.
Zuckerberg explained how his platform was going to serve as Big Brother to restrict all information about COVID-19 that had not been approved by the Big Pharma cartel.
“This isn’t public yet, but we’re building a Coronavirus Information Hub that we’re going to put at the top of Facebook for everyone (200+ million Americans, 2.5 billion people worldwide) with two goals: (1) make sure people can get authoritative information from reliable sources and (2) encourage people to practice social distance and give people ideas for doing this using internet tools. This will be live within the next 48 hours,” he wrote in an email from March 2020.
“As a central part of this hub, I think it would be useful to include a video from you because people trust and want to hear from experts rather than just a bunch of agencies and political leaders. This could be done in a number of formats if you’re open to it. Probably best would be recording a Q&A where you answer people’s top questions, but we’d be open to other formats too,” he added.
“Your idea and proposal sound terrific. I would be happy to do a video for your hub. We need to reach as many people as possible and convince them to take mitigation strategies seriously or things will get much, much worse,” Fauci said in response.
In addition to performing propaganda on behalf of Dr. Fauci, Zuckerberg also staffed Facebook with veteran Democrat operatives and funded crucial election infrastructure for a 2020 election marred with allegations of cheating and improprieties.
Big League Politics reported on how the Zuckerberg cash enforced compliance among bought-off Republicans who turned a blind eye to electoral fraud when it mattered the most:
“The office of Georgia Secretary of State Brad Raffensperger is defending the payout of over $5 million from a group backed by Facebook CEO Mark Zuckerberg to fund election infrastructure in the state.
The Washington, D.C.-based Center for Election Innovation and Research (CEIR) donated almost $5.6 million to the Georgia Secretary of State’s office. They apparently received a tremendous return on their investment as Raffensperger did nothing except obstruct after the suspicious results were reported from polling centers manned by Democrats who were captured on video tape violating election law.
Raffensperger’s spokesman Walter Jones boasted in an email comment for Georgia Star News that Zuckerberg’s money has given them the ability to crush dissent calling for investigations into election fraud.
“Any grant or funding source, as allowed by Georgia law, has enabled this and local elections offices to combat disinformation similar to recent articles published by this outlet that undermine the confidence of Georgia voters,” Jones said.
In addition to bankrolling the elections’ process in Georgia, the CEIR also spent $13 million in Pennsylvania, $11 million in Michigan, $5.6 million in Georgia, and $4 million in Arizona. These are all states where vote counting was mysteriously paused after Trump had garnered a seemingly insurmountable lead. When the vote counting resumed, poll challengers were disenfranchised and hundreds of thousands of mysterious ballots that arrived at the dead of night flipped the election toward Biden.
In addition to paying off various secretaries of state to help induce compliance, Zuckerberg’s social media platform also censored news about Biden’s son Hunter to protect his presidential chances despite the fact that the news was true.”
America is facing biblical levels of corruption, and, if accountability cannot be achieved swiftly against the criminals who doomed the Republic, damnation looks to be on the horizon for the former land of the free.