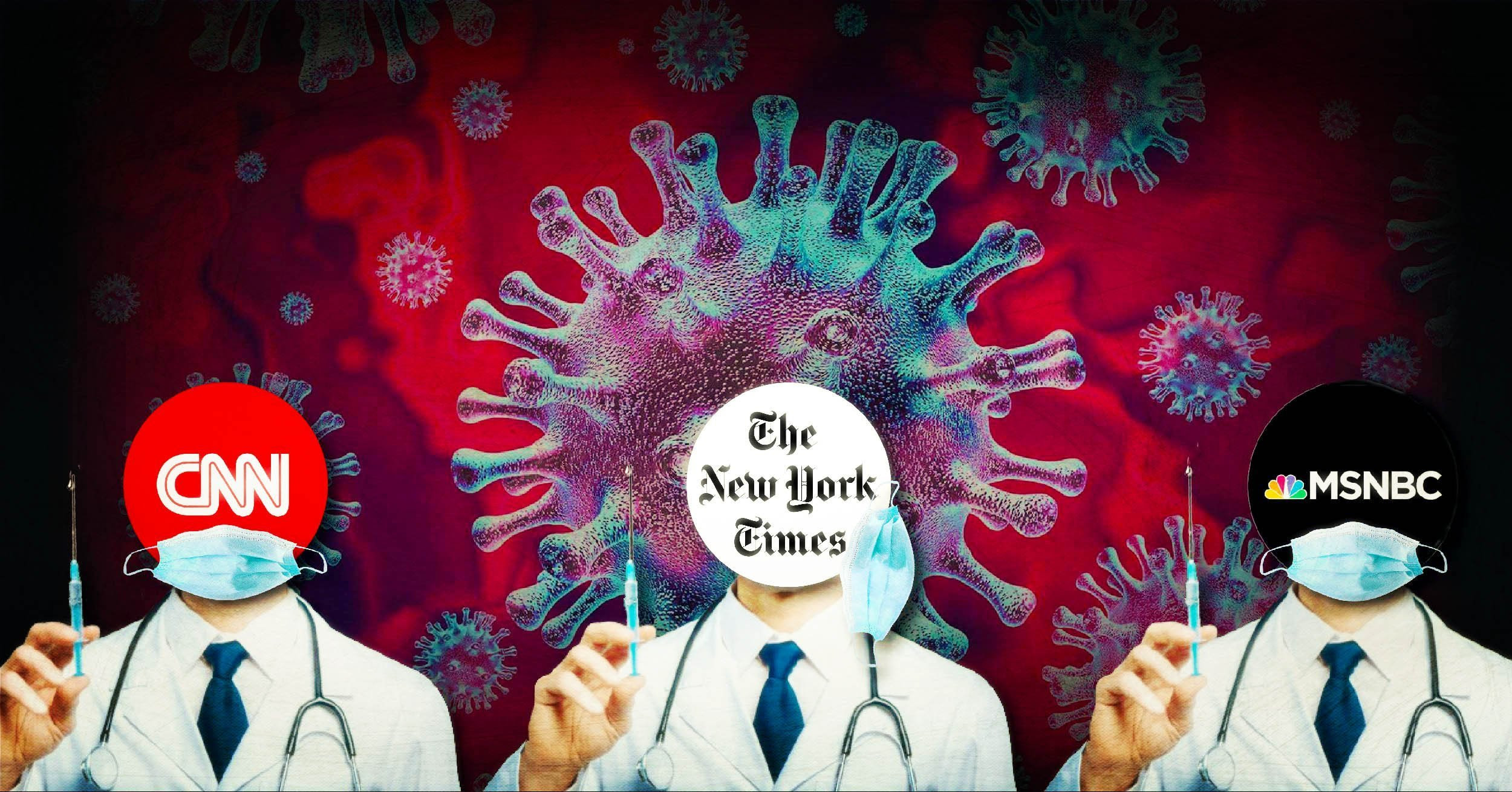 Guest Post by Michael Thau, Ph.D.
This is Part One of a series. Read Part Two here.
“What is happening now, for whatever reason, is not even close to normal.”
That’s what Tucker Carlson claimed, at any rate, prompting outraged denials from the old-guard media and those self-appointed “fact-checkers” who sprung up out of nowhere a few years back, claiming to be the final arbiters of truth.
Carlson was referring to the unusually large number of reports of people who’ve died after getting vaccinated for COVID-19 piling up in the CDC’s official database, the Vaccine Adverse Event Reporting System (VAERS).
And, if nothing else, we learned that those who control which facts and figures become objects of national obsession — those who most of us will never hear a word about — are hell-bent on keeping the VAERS data firmly in the latter camp.


As of May 28, VAERS contains 4,561 reports of post-Covid jab fatalities.That’s liable to not sound like very much if, like virtually everyone, you’ve never heard of VAERS.

After all, though most folks have been mesmerized into pretending otherwise about COVID-19 itself, we all know dying with isn’t really the same thing as dying from.
Nor is dying after.

VAERS now up to 3,486 post-Covid vaccine deaths - almost as many as have been reported for every other vaccine combined in the database’s 30-year history. Lucky us, EVERY SINGLE ONE WAS A COINCIDENCE! Phew. I was starting to get worried. 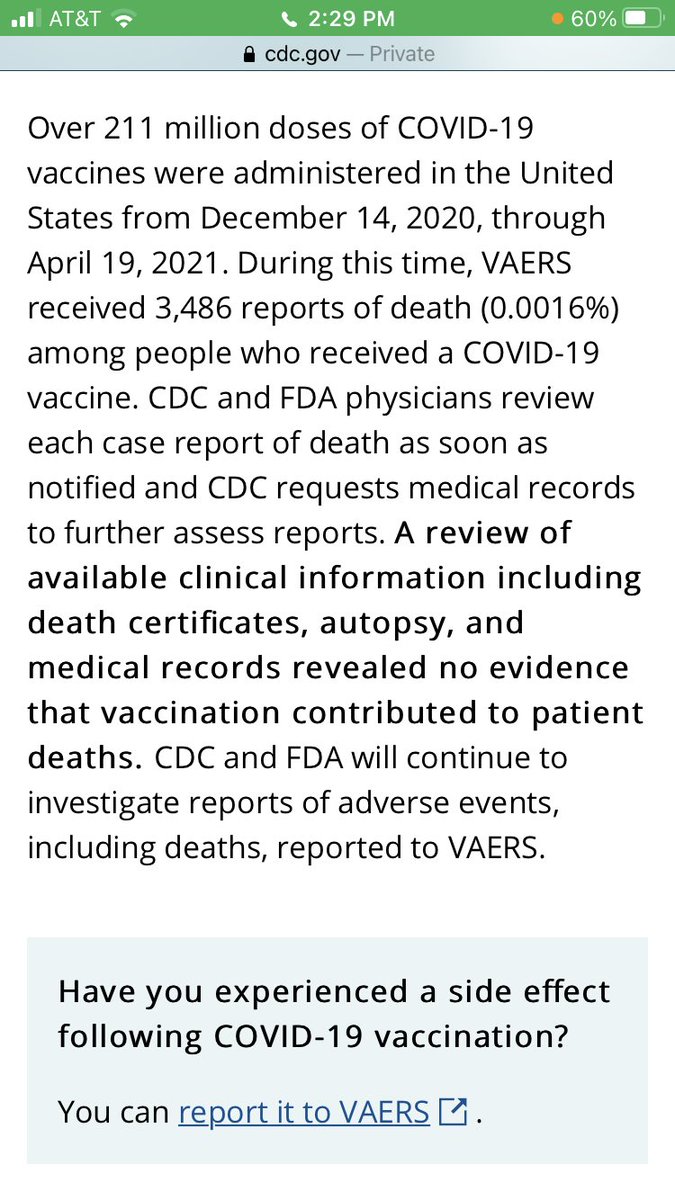 So, given that around 8,000 Americans ordinarily perish in a single day, what’s so odd about finding 4,500 post-vaccination fatalities in five months during which time half the country got jabbed?
The attempts to portray Carlson as a malignant demagogue fomenting unjustified panic about a perfectly harmless but absolutely essential drug all leaned heavily on that point.
The Washington Post’s Aaron Blake was typical:

The fact is that lots of people have received the vaccine — so many that plenty were going to die of something in the months that followed. [Washington Post]

But the pack of media scoundrels desperately yelling, “Nothing to see here!” are the ones playing fast and loose with the facts.
Indeed, they’ve resorted to so much deception to ensure that Carlson’s report gives birth to no wider discussion that their evident zeal to hide this year’s extraordinary increase in adverse event reports — for which the Covid vaccines are entirely responsible — raises even more disturbing questions than the data itself, as troubling as it is.
Massive Undercounting of Potential Side Effects
VAERS is what’s called a passive surveillance system, meaning that instead of actively searching for potential side-effects, it relies entirely on voluntary reporting.
And, though neither Blake nor any of the others determined to stifle discussion mention it, Carlson explicitly noted that it’s been established for over a decade that VAERS’ detection rate is abysmal.
A report submitted to the Department of Health and Human Services (HHS) in 2010 concluded that, quote, “Fewer than one percent of vaccine adverse events are reported by the VAER System.”
The report mentioned was the product of a million-dollar grant the Department of Health and Human Services gave some Harvard Medical School researchers to develop a computerized “active” system that would perform better than VAERS and then run randomized trials evaluating both.
The researchers don’t say how they arrived at that dismal 1% detection rate. But the data they do present paints an equally bleak picture.
From June 2006 through October 2009, they exhaustively searched for potential side effects among the 715,000 patients of Atrius Health, “a large multi-specialty group practice with over 35 facilities.”

Every patient receiving a vaccine was automatically identified, and for the next 30 days, their health care diagnostic codes, laboratory tests, and medication prescriptions were evaluated for values suggestive of an adverse vaccine event. [AHRQ.Gov]

Around half wound up getting some type of vaccine, and 35,570 potential adverse side effects were identified. Yet for the same period, VAERS recorded only around 73,000 within 30 days of vaccination in the entire country.
In other words, in a population 420 times as large, VAERS only managed to capture fewer than twice as many potential vaccine adverse events.
Feature or Bug?
No one should be surprised by the Harvard team’s findings. A system of voluntary reporting about which hardly anyone even knows is, after all, bound to miss virtually everything.
Nor is VAERS obscurity restricted to the general public. A 2013 study by researchers from the CDC itself found that almost 30% of health care professionals had never heard of it. Among those who’d come across a potential vaccine side effect and had, a jarring 83% still failed to file any report.
Yet, according to the CDC, VAERS is supposed to be  “the nation’s frontline system for monitoring vaccine safety,” raising the obvious question:
Why on earth is the CDC still using a passive surveillance system proven completely worthless over a decade ago that anyone could see was bound to massively undercount potential side effects, as nothing has been done to ensure public awareness of such a reporting system in the first place?
And, unfortunately, the only answer seems to be that, for whatever dark reason, that’s exactly what the CDC wants.
And not just because they’ve made no effort to publicize VAERS and increase the dismal reporting rate among medical professionals nor replaced it with something better.
Not only was the Harvard team’s automated system never adopted. They weren’t even able to run the clinical trials comparing its effectiveness to VAERS’ because — after spending three years and a million taxpayer dollars — they found themselves ghosted by the CDC:

Unfortunately, there was never an opportunity to perform system performance assessments because the necessary CDC contacts were no longer available and the CDC consultants responsible for receiving data were no longer responsive to our multiple requests to proceed with testing and evaluation. [AHRQ.Gov]

Truncated Safety Trials Sans Legal Liability
Because only six months of safety data is required for FDA approval, a “frontline system” for detecting potential side effects after vaccines go on the market that actually works is important.
But with regard to the COVID-19 vaccines, none of which even has FDA approval, the need is orders of magnitude greater.
If you’re surprised to hear about that lack of FDA approval, don’t blame yourself. The fact that the vaccine has only received what’s called an Emergency Use Authorization (EUA)  — like so much else about COVID-19 — is being systematically suppressed.
Anthony Fauci even lied on camera (yet again) when asked, “Which of the COVID-19 vaccines have been officially approved by the FDA?”
“Three of them,” replied Fauci, naming the Pfizer, Moderna, and Johnson & Johnson vaccines that, in reality, only have EUAs. Something the odious little man was later forced to admit when the podcast host — who’d actually done his homework — called him out.

But you can understand why Fauci thought he could get away with lying given how rarely the media mentions any COVID-19 vaccine regulatory deficiencies.
Neither the flagship New York Times nor the Washington Post even bothered doing so in their stories announcing that the first Covid vaccine was going on the market. And though CNN was a rare exception, they made the difference between an EUA and FDA approval sound like some trifling bureaucratic formality:

Pfizer would have to file a separate application for its vaccine to be fully licensed by the FDA. [CNN]

What they’re not mentioning is all the neglected safety testing which that separate application would need to include.
A biologics license application required for FDA approval requires six months of data. But for COVID-19, the EUA requirement was cut down to only two months.
Another crucial piece of information being withheld raising the stakes even further. CNBC headlined one of the rare media stories mentioning that you can’t sue Pfizer or Moderna if you have severe Covid vaccine side effects. The government likely won’t compensate you for damages either.
Nor will you be able to sue Johnson & Johnson or anyone else lucky enough to wind up in the very lucrative Covid vaccine business. The manufacturers and federal government have so much confidence in that truncated two months of safety testing that the former were granted the same immunity from liability the FDA already has.
And, of course, once again, not a finger has been lifted to make sure the American people know that, should anything go wrong, they’ve no one but themselves to legally blame — making the notion of informed consent the cruelest of jokes.
Making matters worse, when a vaccine goes on the market with only an EUA, the FDA is required to ensure that anyone taking it knows it’s only been authorized for emergency use, and apprise them of any known risks, as well as to the extent to which risks are unknown.
And it’s a bit tough to see how that duty could have possibly been discharged when hardly anyone even knows that the Covid vaccines were only granted an EUA.
Or that the reason was the long-term safety testing required for FDA approval wasn’t done.
Or that the manufacturers are immune from liability should that or any other deficiency prove tragic.
Or, for that matter — as another person the media has tried to silence, Alex Berenson, noted — that in the five months since the first vaccine hit the market, there have already been almost as many reports of post-Covid vaccine deaths than for every other vaccine combined in the database’s entire 30-year history. 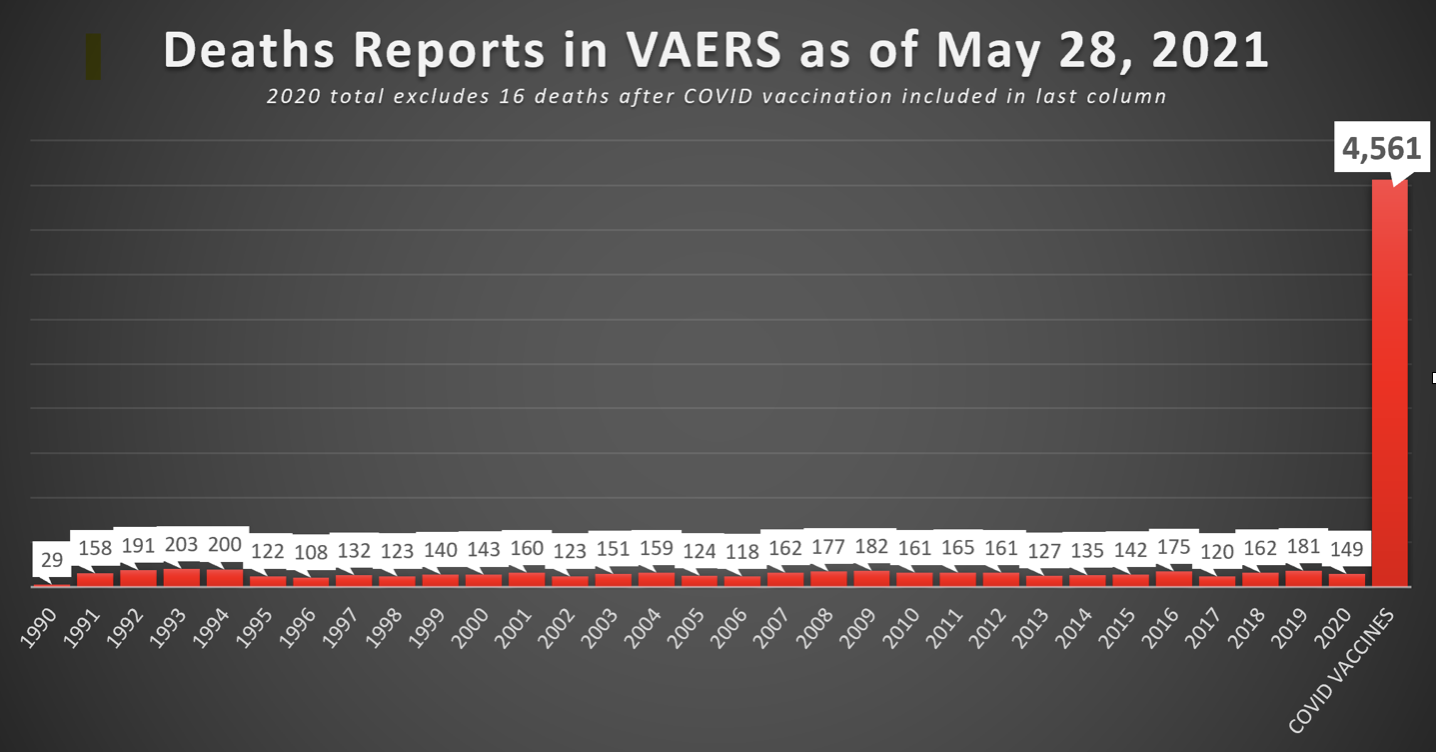