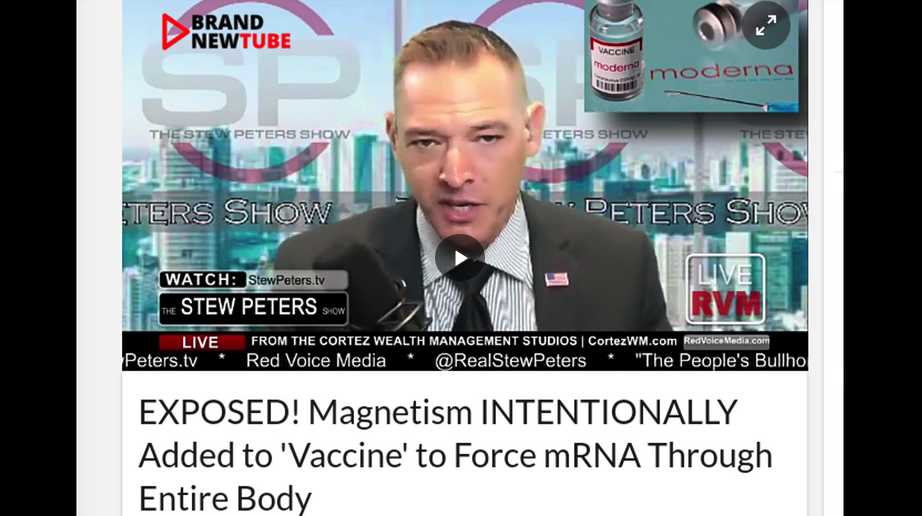 
Last week, COVID vaccine injury victim, Brittany Galvin appeared on the Stew Peters show and her neurologist confirmed that her injection with the Moderna “vaccine” is the cause of her affliction with Guillain-Barré Syndrome, a rare autoimmune condition that affects the peripheral nervous system, resulting in a rapid-onset muscle weakness, paralysis and death.

Since her appearance last week, the Stew Peters show has been contacted by hundreds of other victims who say they have received this exact same diagnosis but as Peters says, “When they try to tell the world, they’re censored, blocked, banned, canceled.”
Another symptom that has become undeniable is the magnetization of the body, which everyone initially thought was a hoax.  Thousands of people have taken to social media to record themselves sticking refrigerator magnets on their injection sites and house keys on their foreheads but few physicians have been willing to step forward until now.
Heath Economist, Dr Jane Ruby, with more than 20 years in pharmaceutical research joins Stew Peters to explain why we’re seeing these magnetic effects associated with the COVID injections. She explains that manipulative magnetic nanoparticles were deliberately added to the shots, because “It is a more aggressive delivery mechanism to get it [the mRNA that creates the spike proteins] into every cell in your body. It’s a process called ‘magneto-fection’…they are using magnetic fields through different chemicals to actually concentrate the mRNA into peoples’ cells. This is in alignment with everything we’ve been reporting for weeks, now. We just know what and how is behind these magnetic phenomena, where people are having these items are sticking to them.
“So, what it is is a lipid nano-particle and it’s a super delivery system and there are places in your body that synthetic DNA and RNA should not be going and yet, this approach forces the material – the mRNA encoding – to force your cells to make, over and over again, these dangerous spike proteins all over your body. It’s actually a forced gene delivery system.”
She says we’re going to hear more and more about SPIONs, which stands for [url=https://www.sciencedirect.com/topics/medicine-and-dentistry/superparamagnetic-iron-oxide-nanoparticle#:~:text=Superparamagnetic iron oxide nanoparticles %28SPIONs%29 are the most,their unique physical%2C chemical%2C magnetic and biocompatibility properties.]Superparamagnetic Iron Oxide Nanoparticles[/url], “Where they’re putting this magnetic field technology in and around the lipid-nanoparticle envelope…to get this mRNA into your cells.
“Why do they need to do that? Because the mRNA is so delicate, so easily-degraded – it’s another reason why it has to be stored, you know, the Pfizer shot material needs to be stored at least 70 degrees Fahrenheit below zero.”
There are hundreds of components called “polymags” that are available in 200-mcg vials that can be used to put magnetic fields around your molecules. Dr Ruby cites a German company called Chemicell which sells these with the following disclaimer, “‘The magno-fection reagents and all of its components are developed, designed, intended, sold for research use only.’ And here’s the frightening part, Stew, ‘They are not to be used for human diagnostic or any drug intended for humans.'”
Dr Ruby believes Pfizer and Moderna are using these substances illegally, which is a crime against humanity and that the mechanism of these magnetized nanoparticles and reagents is what explains what we see in the chronology of Brittany Galvin’s videos, where, at first, we see magnetic objects sticking to her injection site and later, the objects are seen sticking to her forehead and cheeks.
She says, “This is why you must be given informed consent. You must be given the ingredients of anything going into your body and last but not least – just wait! We’re learning more and more every day.”

» Visual Display of What the mRNA Vaccine Does To Your Body’s Cells…
» Depopulation & The mRNA Vaccine
» Cobalt-60 + mRNA vaccine = Disaster
» Dr. Meryl Nass: Bell’s Palsy Occurred in 7 Cases with Subjects who Received a COVID mRNA vaccine – Yes it is a Vaccine Reaction
» Another Vaccine Has Been Added To Australia’s National Immunization Program