Physicists from the LHCb Collaboration at CERN have proved that a subatomic particle called the charm meson can switch into its antiparticle and back again. Using data collected during the second run of the Large Hadron Collider, they’ve measured a difference in mass between the particles of 1*10-38 g. 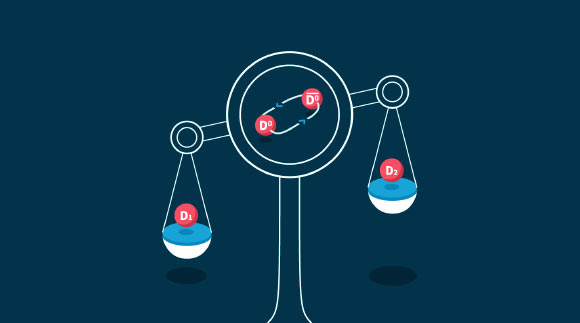 The LHCb Collaboration measured the tiny mass difference between the D1 and D2 mesons, which are a manifestation of the quantum superposition of the D0 particle and its antiparticle. This mass difference controls the speed of the D0 oscillation into its antiparticle and back. Image credit: CERN.
The D0 meson is one of only four particles in the Standard Model of particle physics that can oscillate into their antimatter particles. The other three are the K0 meson and two types of B mesons.
Mesons are part of the large class of particles made up of fundamental particles called quarks, and contain one quark and one antimatter quark.
The D0 meson consists of a charm quark and an up antiquark, while its antiparticle, the anti-D0, consists of a charm antiquark and an up quark.
In the strange world of quantum physics, the D0 particle can be itself and its antiparticle at once.
This quantum superposition results in two particles, each with their own mass — a lighter and a heavier D meson, known as D1 and D2. It is this superposition that allows the D0 to oscillate into its antiparticle and back.
The D0 particles are produced in proton-proton collisions at the Large Hadron Collider, and they travel on average only a few millimeters before decaying into other particles.
By comparing the D0 particles that decay after traveling a short distance with those that travel a little further, the LHCb physicists measured the key quantity that controls the speed of the D0 oscillation into anti-D0 — the difference in mass between the heavier and lighter D particles.
The result, 10-38 g, crosses the ‘five sigma’ level of statistical significance that is required to claim an observation in particle physics.
“To put this incredibly small mass difference in context, it is still a small number even when compared with the mass of the D0 particle,” said Dr. Chris Parkes, spokesperson of the LHCb Collaboration.
“And it’s a big step in the study of the oscillatory behavior of the D0 particles.”
With the tiny mass difference now observed, a new phase of particle exploration can begin.
Physicists can make further measurements of the D0 decays to obtain a more precise mass difference and look for the effect on the D0 oscillation of unknown particles not predicted by the Standard Model.
Such new particles could increase the average speed of the oscillation or the difference between the speed of the matter-to-antimatter oscillation and that of the antimatter-to-matter oscillation.
If observed, such a difference could shed light on why the Universe is made up entirely of matter, even though matter and antimatter should have been created in equal amounts during the Big Bang.
“What makes this discovery of oscillation in the charm meson particle so impressive is that, unlike the beauty mesons, the oscillation is very slow and therefore extremely difficult to measure within the time that it takes the meson to decay,” said Professor Guy Wilkinson, a physicist at the University of Oxford and member of the LHCb Collaboration.
“This result shows the oscillations are so slow that the vast majority of particles will decay before they have a chance to oscillate.”
“However, we are able to confirm this as a discovery because LHCb has collected so much data.”
“Tiny measurements like this can tell you big things about the Universe that you didn’t expect,” said Dr. Mark Williams, a physicist at the University of Edinburgh and member of the LHCb Collaboration.
The results will be published in the journal Physical Review Letters.
_____
R. Aaij et al. (LHCb Collaboration). 2021. Observation of the mass difference between neutral charm-meson eigenstates. Physical Review Letters, in press; arXiv: 2106.03744

Re: CERN Physicists Observe Nonzero Mass Difference between Charm Meson and Its Antiparticle Thu Jun 10, 2021 10:52 am

The construction of an underground cavern at Point 1, which will house equipment for the High-Luminosity LHC, has been successfully completed.