The F-ing President Has F-ing Dementia 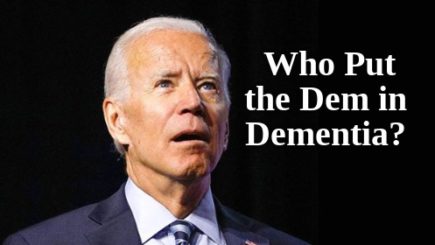 When receiving information about the world it’s necessary to scrutinize not just the information, but also the means by which the information was brought to your attention and who could benefit from its circulation. Few bother doing all of these things, which is why most people are confused about the world.
The fact that Biden is continuing all of Trump’s policies means those who believed Trump was fighting the establishment must now admit that either (A) they were wrong or (B) Biden is also fighting the establishment.
The only people promoting the idea that Joe Biden has dementia are right wingers, left wingers, and Joe Biden.

People tell me I should criticize Biden’s policies and not his obvious mental decline, but a very clear sign that the most powerful government on earth is not being run by its elected officials is actually an extremely noteworthy fact that everyone should be talking about.
The only face more suitable for the US empire than a sociopathic billionaire is a decrepit warmongering corporate whore with dementia.
When imperialists say an issue is “complicated” what they really mean is that a very simple matter has been covered over by a lot of complicated spin and propaganda narratives.
I tried to infiltrate MSNBC and CNN but they won’t hire me because I have no CIA experience.
Jimmy Dore lives so rent-free in Cenk Uygur’s head that BlackRock is trying to buy it.
The best way to get rich as an intelligence agent is to run media influence operations posing as a “former” intelligence agent.
The main difficulty with socialism is that when a nation tries to move away from the most toxic aspects of capitalism, the most toxic aspects of capitalism immediately begin arming local proxy militias and working to cut it off from the world economy.
Any evil deeds you suspect the US empire might be perpetrating in secret are probably not as bad as what it is doing openly in Yemen as you read this sentence.
A society which supports the butchery in Yemen is not going to abandon factory farming and animal cruelty. We are very, very far from treating our animal cousins properly if we can’t even stop slaughtering our own.
The difference between a centrist Democrat and a progressive Democrat is that one favors slow incremental changes which never actually happen, whereas the other favors slow incremental changes which never actually happen.
The shrinking audiences for The Intercept and TYT shows there’s not actually much demand for the area between (A) real criticism of capitalist imperialism and (B) MSNBC. Once your eyes begin to open you tend to move quickly from mainstream to radical without hovering in between.
My whole life is interacting with binary-minded dimwits. You hate Democrats so you must be a Republican. You criticize the US empire so you must think China is perfect. You’re skeptical of the Pentagon’s UFO narrative so you must think all UFOs are weather balloons and swamp gas.
I know this UFO thing doesn’t interest some of my regular readers, or leftists in general, but it is a major news story of a highly suspicious nature which just so happens to fit in nicely with preexisting US cold war objectives. It does need critical coverage and analysis.
Mainstream media: We must stop the spread of crazy conspiracy theories even if we have to censor the entire internet.
Also the mainstream media: The US military says it’s been lying about UFOs for decades and maybe space aliens are flying around above your house.
Mainstream media pundits now believe UFOs are real because the US war machine told them so, which says very little about UFOs but says a lot about mainstream media pundits.
If you’re going to accept that (1) UFOs are being piloted by non-human intelligence, (2) that their focus is on nuclear weapons facilities, and (3) that sightings are becoming more common, you’ll have to conclude that they ramp up operations whenever we engage in insane cold war escalations.
My point of course is not that these are aliens (I have no idea what any of this stuff is), it’s that any position that accepts points 1, 2 and 3 should logically want less militarism, not more. Which will be important to keep in mind as Official Narratives unfold going forward.
People bitch when I say landlords shouldn’t be a thing like “How dare you, I’m a landlord and I collect rent to pay for my retirement!” Well, nobody should have to build their retirement on the economic premise of a permanent underclass. If they do, something has gone very wrong.
I heard someone say mothers are expected to work like they don’t have kids and parent like they don’t have a job, and that really says it all. This impossibly high-pressure way of existing is the “equality” mainstream feminism has given us.
I feel kind of silly about how I used to try and explain why I write about some issues and not others. I write entirely from inspiration; I’ve never once felt like I’m in control of what dances its way into my head. The honest answer is I write what I write and I don’t know why.
_______________________
https://www.blacklistednews.com/article/80192/the-fucking-president-has-fucking.html
Thanks to: