American workers are trying to make their way in an economy that’s rigged against them.  We made this claim many years ago.  Today, for fun and for free, we revisit this assertion…starting with the latest from those doing the rigging.
This week, after a two day meeting, the Federal Open Market Committee (FOMC) released their statement.  Nothing material changed.  The Fed will continue to hold the federal funds rate near zero.  The Fed will also continue to create at least $120 billion per month from thin air to buy Treasuries and mortgage-backed securities.
Bond yields spiked and the price of gold dropped because 13 Fed officials now plot dots that project two hikes to the federal funds rate in 2023.  Fed Chair Jay Powell also mentioned the Fed is “talking about talking about” bond tapering.  These technocrats likely know – though they won’t admit – they’ve already lost control.
Consumer price inflation is ‘officially’ rising at a 5 percent annualized rate.  However, the ‘unofficial’ rate of consumer price inflation, as calculated using methodologies in place in 1980, is about 13 percent.  This rate of inflation is remarkably destructive to household budgets.
‘Talking about talking about’ tapering and telegraphing federal funds rate increases some two years from now will do little to contain consumer price inflation.  The fact is, it has already veered out of control.  We expect gas prices to top $5 per gallon in California this summer.  Many Americans are not prepared for sustained, unrelenting price inflation.
Here’s the hard, back of the napkin math they are facing… 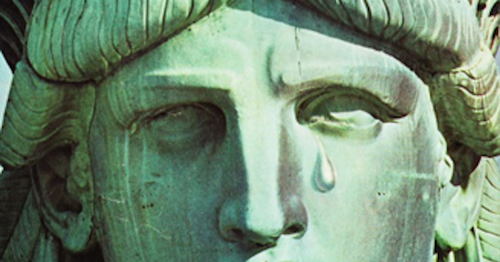 A box of Hamburger Helper – including Four Cheese Lasagna and Cheesy Ranch Burger flavors – will set you back about $1.24.  The pound of 80/20 grade ground beef will cost you about five bucks.  A can of green beans – to balance out the protein and carbohydrates – will run about $1.79.
Mix up a pitcher of Country Time Lemonade to wash it down with…and you’ve got Monday night’s dinner covered for a family of four for about $10.  But what about Tuesday?  And what about breakfast and lunch?
A family of four can easily run up $1,000 per month in food costs.  Yet food, in comparison to shelter, is downright cheap.  Here in Long Beach it takes $2,000 per month to rent a two bedroom 1960s era infill apartment above a garage that’s in bad need of paint.  Plus, the cost of utilities, phone, Wi-Fi, a car payment, and insurance, will set you back another $1,000.
So you’re looking at $48,000 a year just to cover the basics.  But we all know stuff happens.  There are blown transmissions.  There are leaky roofs.  There are new shoes for the kids.  There are broken arms and other unexpected medical expenses.
The median household income in Los Angeles County is about $73,000.  After paying federal and state income taxes, social security, Medicare, and state disability insurance, net pay is $53,653.  Assuming no auto repairs bills, medical payments, or other unexpected costs,  that leaves $5,653 – or $471 per month – for entertainment, retirement savings, and college savings.
There’s not much fat in this budget.  That’s why household credit card debt is about $6,270.  Moreover, you can see why consumer price inflation rising at an annualized rate of 5 percent is problematic.
At 5 percent price inflation, the purchasing power of $53,653 in net pay is dropped by $2,682 – or by $223 per month.  This amounts to a 47 percent loss of the $471 per month left for unexpected bills, entertainment and savings.  At 13 percent price inflation, you’re now behind the eight ball by $110 each month.
The Fed may be projecting rate hikes in 2023.  Sour grapes to that.  Too little.  Too late.
Here’s why…

The general burden of the American worker is the daily task of squaring the difference between the price of food, shelter, and consumer goods and the diluted dollars that appear in their biweekly paychecks.  There is sound reason to believe that this task has been reduced to some sort of practical joke.  An exhausting game of chase the wild goose.
How is it that the economy grew for nearly a decade straight, but the average worker saw no meaningful increase in their income?  Did workers really sprint in place this entire time?  How did they end up in this ridiculous situation?
The fact is, for the American worker, America’s brand of a centrally planned economy doesn’t pay.  The dual impediments of fake money and regulatory madness apply exactions which cannot be overcome.  There are claims to the fruits of one’s labors long before they’ve been earned.
The economy, in other words, has been rigged.  The value that workers produce flows to Washington and Wall Street, where it’s siphoned off and misallocated to the cadre of officials, cronies, and big bankers.  What’s left is spent to merely keep the lights on, the car running, and food upon the table.
Indeed, American workers are chasing the wild goose.  They’ve been chasing it for years.  They’ve been schlepping and grinding day in and day out and have nothing to show for it.  And they’re exhausted.
When the economy was locked down by government diktat in 2020 to somehow save the people from coronavirus, many workers were laid off.  The technocrats then delivered stimmy checks and generous unemployment programs that were financed with printing press money.
Some workers found they never had it so good.  Federal unemployment benefits currently average around $600 per week.  Now, as restrictions are lifted and the economy reopens, there’s a growing labor shortage.
Do you see the failings of centrally planned economies?  Government solutions create new problems.  Solutions to those problems result in new problems.  And on and on.
The folly is inescapable.  The ultimate catastrophe is inevitable.  And the final devastation is inconsolable.
How about giving sound money, private property rights, rule of law, limited representative government, and freedom a chance?
At this point we’re not optimistic on this prospect.  Many of the country’s medium and large cities have already entered a third world death spiral.  And those that haven’t pursue it with zealous vigor.
A stash of gold, silver, and, perhaps, some cryptocurrencies, may help buffer the fallout…if you’re lucky.

» IT IS DONE! THE DEATH SPIRAL HAS BEGUN.
» Global Economic Death Spiral
» Lied suddenly: the Deep State death spiral
» Radioactive Fallout from Fukushima: The World as We Know It Has Changed
» Economist Richard Duncan: Civilization May Not Survive 'Death Spiral'-- Tells CNBC It will ALL Pop Simultaneously