Bring Them All Home from Kevin Annett Must Be Stopped 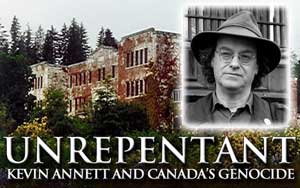 Bring Them All Home

It’s been years since my last post, but I felt it’s time for one last entry…..
I would like to begin by acknowledging that the land on which I write this is the unceded territory of the Syilx (Okanagan) Peoples.
Two weeks ago, 215 bodies were discovered at an Indian Residential School in Kamloops, B.C. At first glance, I was full of questions regarding the validity of this discovery given the high margin of error when using ground penetrating radar. Discovering anomalies in the ground does not equal graves, nor buried bodies for that matter. Further reports from the news agencies, locally and nationwide, seemed very eager to jump on the bandwagon of dead children without so much as a single question raised about the bodies discovered there.
There can be no doubt that the only small framed skeletons that would be found on the grounds of any IRS school, would be those of children. The nuns and priests who staffed these schools would have been buried in some Catholic graveyard, no doubt, so who else would these be? However, the statement about a three year old having been discovered by this method (and not by digging at the site) left me wondering about how this was all being handled. I waited to hear if the local Indian Band was involved and not just some other self interest groups. I had no doubt that a certain ex-United Church, wannabe native, named Kevin Annett would appear on the scene ready to cry “TRIBUNAL!”
This week, a further 751 bodies have been found at another IRS school in Saskatchewan, bringing the total to 966 and In these few weeks Kevin has produced a number of video’s and statements calling for a revolution and rebellion…all the while calling himself Eagle Strong Voice. Wearing everything from native dress to cordurouy, and sporting a moustache, his rallying cry is clearly centered on taking advantage of the reports of dead children at the hands of the Catholic Church. So much so that he has increased the number of dead from 50,000 to 60,000 without so much as a shred of evidence to support that increase. His efforts to ressurect the ITCCS (long defunct when it was revealed that there was no trial and no jury and no court documents that weren’t drafted with his own pen under a variety of pseudonyms. It’s true folks, there is no ITCCS and if it ever existed it only did in the small but significant way that the activists in Ireland gave it credibility. Kevin himself admitted that it was only a symbolic gesture aimed at raising awareness of the atrocities of the Church and State.
White folks who followed him during those turbulent years, used his bogus documents to close down churches, keep A & E’s (emergency departments) open and to win back their children from CPS. Real people used his false promises and lies to affect change and it got them arrested, nearly shot and put in mental hospitals. Even Dean Clifford (who was put in jail for firearms and other miscellaneous charges related to his Freeman on the Land movement) attempted to use his documents as a get out of jail free card. The native people who tried to elevate their voices by aligning with him ended up dead, discredited or defamed.
So here we are again, several years since my last post on this blog where I’ve tried to expose the conman masquerading as a savior of the native people. Those who haven’t read my articles fully, take them to offense, and that’s ok, because many more people have looked deeper than the superficial words of a man who calls himself by many names. The sad part is that most of them are white and have no idea just how destructive a white man who calls himself a friend of the natives can be when his intentions are self serving.
A native grandmother (Facebook account Elder Taz) in Alberta recently posted a video raging against the response by ‘old white guys’ telling her they didn’t want to hear a video about the recent gpr finds. Her voice was loud and strong and it was full of pain. She rightfully expressed that pain and got a 24 hour suspension and the removal of her video from Facebook for it. It seems as if Facebook doesn’t want grandmothers using “F”-bombs and calling out the white folks and holding the Catholics and Government responsible for the kidnapping and abuse and deaths of children. Still, she accurately expressed the immeasurable agony of mothers having their children stolen out of their arms with little to no hope of seeing them again. In her rage she asked (without asking) the painful question, “why” and “who will pay?”.
As a white woman, with grandchildren of my own, I understand the ferocity of her statements and have compassion for her tears. However, I can never truly know her pain, nor can I justify the actions of the white colonizers and so called ‘founders’ of this amazing country I call home. While I never perpetrated the crimes, I can acknowledge that they occured and I can step aside and let the kookums and grandmothers rage. I can let the living bury their dead and seek whatever reparations they deem fit. But a white mans republik, built on the tears of the grandmothers while exploiting the discovery of the graves of their dead children would bring disgrace to their memory and all that they suffered. Let’s all get out of the way and let the healing happen in the way that their families and communities need it to happen. Let’s honor their suffering by checking our white privilege at the door to reconcilliation and only enter that circle of healing once we’ve been invited.

» Kevin Annett: An URGENT Call To All Who Serve The Light! Let's Bring Down Their Grid! June 2, 2015
» Kevin Annett Eagle Strong Voice (yes that is what he is calling himself now) - On Hard Times and Santa Claus: Kevin Annett's Whimsical Appeal
» Another Perpective of Annett? - You decide - Kevin Annett: A Modern Abuser Of Residential School Survivors…
» Kevin Annett – Here we go folks, the big guns are coming out after Kevin
» Alfred Webre: Why I exposed Kevin Annett & ITCCS