OUT OF MIND » THE INSANITY OF REALITY » GOVERNMENTS & THE NEW WORLD ORDER » EMBARRASSING: Biden Keeps Head Down…Speaks Like A Puppet

Joe Biden is without a doubt, the most incompetent “president” in the history of our nation. 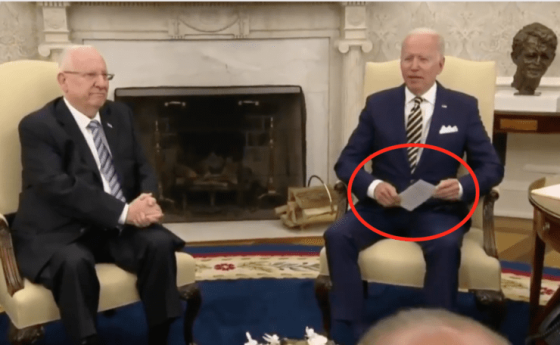 Source: Patty McMurray
Today, instead of offering sincere support for Israel to President Reuben Rivlin who was visiting the White House, Joe Biden instead, kept his eyes fixed on notecards he held on his lap with prepared remarks.
After Joe pointed out how glad he was that President Rivlin brought his daughter with him on his trip to the U.S. (watch HERE), he attempted to prove his support for Israel by saying, “As the American press here can tell you,” suddenly, Biden appeared to catch himself in the middle of making yet another nonsensical statement, and backtracked, “Well, they can’t tell you anything—they’re not supposed to,” he said laughing.
Note to Joe: The press doesn’t typically inform leaders of other nations about how the President of the United States feels about them.
The bumbling old lifetime politician continued, as he crossed his legs and propped his notecards with comments someone else likely prepared for him, on his thigh.
Joe rambled on about not allowing Iran to get a nuclear weapon and read from his notecards about his “unwavering commitment” to defending Israel.
At one point, Joe attempted to act tough but blew it with the last line, “What I can say to you? Iran will never get a nuclear weapon on my watch!” adding, “As they say.”
Who is ‘they,” Joe?
The short clip of the interview is difficult to watch, as Israeli President Rivlin is forced to sit by and watch Joe, in the most insincere way possible, attempt to reassure him of America’s steadfast commitment to Israel, all while not even making eye contact with him.
Watch:

Biden reads prepared remarks from notecards to Israeli President like a kindergartner giving his first speech.

OUT OF MIND » THE INSANITY OF REALITY » GOVERNMENTS & THE NEW WORLD ORDER » EMBARRASSING: Biden Keeps Head Down…Speaks Like A Puppet

» Hunter Biden Laptop Store Owner Speaks Out After Going Into Hiding
» 30 People Show Up To See Biden, While 45,000 Head To Trump Rally
» ‘Devastated’ Family of Marine That Biden Left Behind in Russia Speaks Out After Trade for Brittney Griner
» Benjamin Fulford speaks together with Alexander Romanov, of the Gnostic Illuminati, and Chodoin Daikaku, Head of the World’s Martial Arts societies.
» Wait... What? - That is Embarrassing