My email inbox was so stuffed this past week that it was very difficult to decide what to blog about. Indeed, I’ve already done one blog this week on two different articles submitted by two different people, because I thought those articles might have been related.
Today is the same: we have two different articles submitted by two different people that might be related, and in my “high octane speculation methodology” I am going to assume that they are.
Firstly, we have the following article submitted by S.D. about a NOTAM (Notice to Airmen) recently issued by the Federal Aviation Administration (FAA):
Is HAARP Firing Up? FAA Issues Warning About “Electromagnetic Radiation”
There’s a lot going on here, but note especially the following:

A longstanding topic of great speculation among curious minds is HAARP, a controversial Alaska-based research facility that studies the outermost layer of Earth’s atmosphere: the ionosphere.
HAARP (short for High-Frequency Active Auroral Research Program) has been at the center of wild speculation that its high-power radio frequency transmitter facility can control the weather. Though those claims have yet to be confirmed, conspiracy theorists say otherwise.

Before we go further, let’s stop right there and note a few things. The basic patents for HAARP were taken out by Bernard Eastland in the 1980s, and many think that it was a component of President Reagan’s Strategic Defensive Initiative (SDI), or as it was more popularly known, “Star Wars”. When those patents are actually read, two things are mentioned as possible applications for such a large ionospheric heater: missile defense, and weather modification. There’s no if’s, and’s, or but’s about it. (One can read these patents in Dr. Nick Begich’s and Jean Manning’s book, Angels Don’t Play this HAARP).
With that in mind, now consider this:

HAARP has fallen out of the news cycle in recent years for inactivity, but there’s reason to believe that it’s being fired back up for “scientific research.”
A notice to airmen (known as a NOTAM) was issued by the Federal Aviation Administration on June 17 with the beginning date of June 21 through June 25. 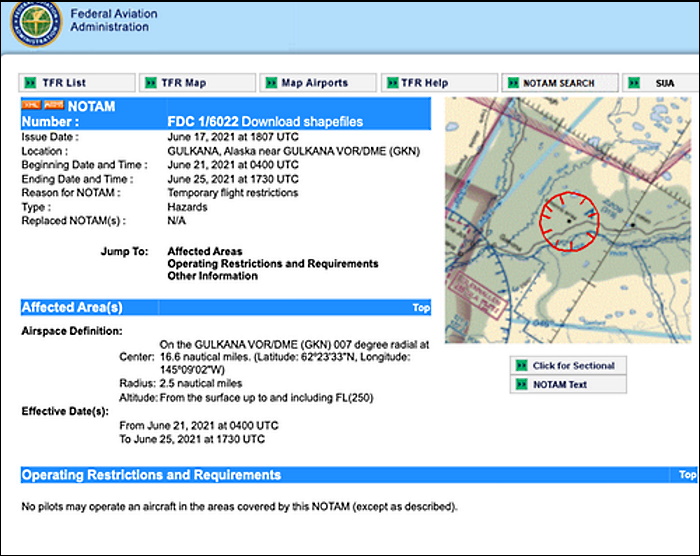 The NOTAM places “temporary flight restrictions” around Gulkana, Alaska, where the HAARP facility is located. It reads that planes are restricted from flying in the Gulkana airspace due to “electromagnetic radiation for scientific research.”

So there you have it: the FAA has placed a restriction on the airspace around Gakona, Alaska, the actual home of HAARP, indicating that there will be unusual electromagnetic radiation in the area. (While we’re at it, let’s recall those bird deaths I mentioned earlier this week: might this have something to do with them? Given the strange behaviour of birds attacking 5G towers, I wouldn’t rule it out, but time will tell.)
Now consider the following article submitted by K.M.:
‘Life-threatening’ heat wave begins in the Northwest
Now note that the Gakona-HAARP Notice to Airmen was issued on June 17th, and the heat wave alert article is updated for  June 27. According to that article, a record heat wave is expected to hit the American northwest:

A historic and “life-threatening” heat wave is underway across the Pacific Northwest, the likes of which — in terms of high temperatures and duration — has never been experienced before in that part of the country. AccuWeather forecasters are calling for record-shattering heat to linger through early week, not only making life miserable for a part of the country where air conditioning is not prevalent but also posing a significant health risk to millions.
Consecutive days of high temperatures well into the triple digits are forecast throughout parts of Oregon and Washington, which includes the Interstate 5 corridor. Both Portland, Oregon, which could see the mercury crack the 110-degree-Fahrenheit mark, and Seattle, which is expected to top 100, will see temperatures soar 30 to 40 degrees above normal. Points farther inland are likely to have temperatures balloon to above 115.
Average highs in June can be anywhere from the 70s in eastern Washington and Oregon to the 80s in western areas and into Idaho.
The dangerous heat is forecast to peak through Monday as high pressure settles in and enables temperatures to climb to new heights. (Boldface emphasis added)

To this is appended the following picture, showing the area of high pressure in the northwest, and the corresponding area of low pressure over the central plains region of the country: 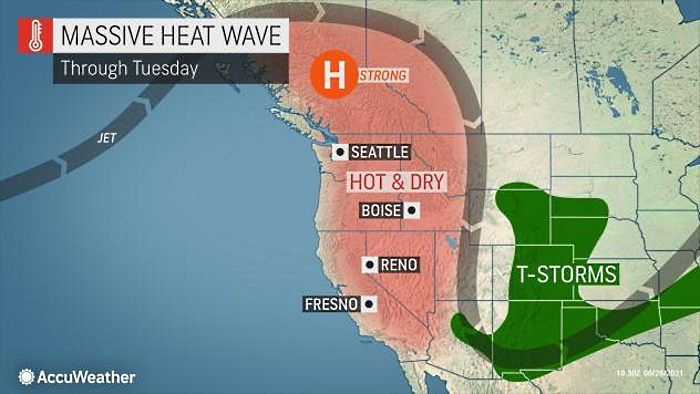 So how might this tie in to HAARP?
Very easily: HAARP is an ionospheric heater. That is to say, its phased antennae arrays are designed so load energy into the ionosphere, and can do so quite literally with pinpoint accuracy. Loading massive amounts of energy in such a fashion can raise the ionosphere, creating regions of low pressure, which in turn can lower it elsewhere, creating regions of high pressure, with corresponding shifts in the jet stream, all of which is visible on Accuweather’s map.  (Think of the Chinese flooding of last year and this year in connection with this.)
So in my opinion, we’re looking at weather modification here.
The question is, why would anyone want to bake the northwest, or inundate the lower plains?
This is a case of “you tell me”, but for my part, I suspect we’re looking at yet more evidence of a covert war taking place. The question is, against whom? And yes, I do think that Chinese defector story might be related to all this…
See you on the slip side…