A team of U.S. scientists has developed a CRISPR-based method for studying how eukaryotic cells repair DNA in space. 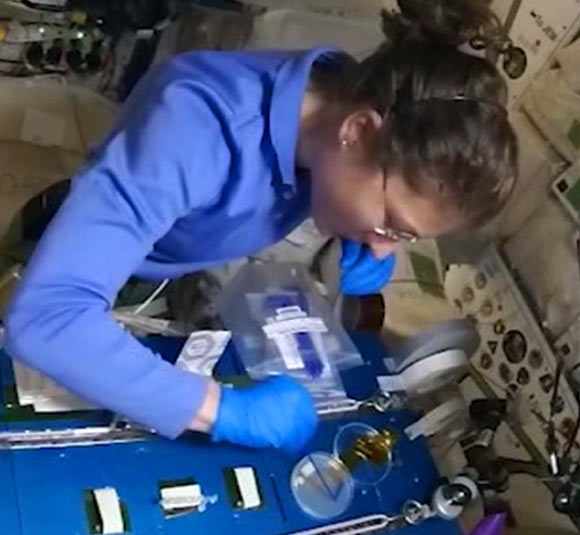 Astronaut Christina Koch plating Saccharomyces cerevisiae following transformation. Image credit: NASA.
Astronauts traveling beyond the protective boundaries of Earth’s magnetosphere are at an increased risk of DNA damage caused by ionizing radiation.
Such DNA damage may lead to cancer and other detrimental health effects, raising questions about the safety of long-duration space travel.
Therefore, which specific DNA-repair strategies are employed by the human body in space may be particularly important.
The new technique developed by Dr. Sebastian Kraves of MiniPCR Bio and his colleagues uses CRISPR/Cas9 genome editing technology to create precise damage to DNA strands so that DNA repair mechanisms can then be observed in better detail than would be possible with non-specific damage via radiation or other causes.
The method focuses on a particularly harmful type of DNA damage known as a double-strand break (DSB).
“Using the CRISPR/Cas9 system to study DNA repair in space has several advantages over previously established models,” the researchers said.
“First, this system does not utilize radiation or other reagents that cause widespread, non-specific DNA damage and are unsafe to use during spaceflight.”
“Second, because the DSB is generated at a precise location in the genome, any changes in DNA sequence following repair can be easily identified and tracked using methods previously validated on the International Space Station (ISS), namely, polymerase chain reaction (PCR) and DNA sequencing.”
The scientists successfully demonstrated the viability of their novel method on cells of the yeast Saccharomyces cerevisiae aboard the ISS.
“It’s not just that we successfully deployed novel technologies like CRISPR genome editing, PCR, and nanopore sequencing in an extreme environment, but also that we were able to integrate them into a functionally complete biotechnology workflow applicable to the study of DNA repair and other fundamental cellular processes in microgravity,” Dr. Kraves said.
“These developments fill our team with hope in humanity’s renewed quest to explore and inhabit the vast expanse of space.”
The study was published online in the journal PLoS ONE.
_____
S. Stahl-Rommel et al. 2021. A CRISPR-based assay for the study of eukaryotic DNA repair onboard the International Space Station. PLoS ONE 16 (6): e0253403; doi: 10.1371/journal.pone.0253403