Source: Leisa Audette
A commercial pool contractor who took photos of the Seaside, Florida condominium building just 36 hours before it collapsed is speaking out to the Miami Herald.
The contractor who asked not to be named visited the building recently to examine the pool and bid on “cosmetic work.”
Did the tragedy begin with the pool and garage basement? According to the husband of a Cassondra “Cassie” Billedeau-Stratton missing from the Champlain Towers collapse, his wife called to tell him the pool caved in and described a massive sinkhole in its place just when the line went dead.
Cassondra “Cassie” Billedeau-Stratton (pictured below) is among the people missing from the Champlain Towers South collapsed.
Cassondra “Cassie” Billedeau-Stratton was staying on the fourth floor of the Florida condo complex close to the pool.

Latest: Miami Firefighter Finds Body of His Own Daughter While Searching Through Collapsed Condo Debris

The pool repairs were part of the restoration project set to begin on the building. Residents of the building were being assessed $1,000 according to one woman who recently purchased a condo in the building for $600k. She survived the collapse and said the building problems were never revealed to her during the purchase:
Ileana Monteagudo told the New York Post that she paid $600,000 for a sixth-floor two-bedroom condo this past December in the Champlain Towers in Surfside, Flordia. She learned about structural issues only after she purchased the condo:
“They never told us anything. Then they suddenly make us make an extra $1,000 special assessment for all these repairs they need to do. We are supposed to start paying in July.”
According to numerous reports, the trouble in the pool area and the basement garage indicated serious problems.
Photo below of the pool equipment room via Miami Herald:

The contractor took photos of the garage of the Champlain Towers South showing cracking and extensive corrosion to structures plus pools of water on the floor.
Photo of standing water in the pool equipment room via the Miami Herald.

There have been reports of repeated flooding in the basement garage of the building. Former maintenance manager for the building William Espinosa told CBSLocal he had raised concerns about ocean water regularly inundating the parking garage. He said, “…it was so much water, all the time, that the pumps never could keep up with it.” The maintenance manager went on to say there was sometimes two feet of water in the basement:
“The water would just basically sit there, and then it would just seep downward,” Espinosa said. “It would just go away after a while. And I would think, where does that water go? Because it had to go in through somewhere. I’m talking about a foot, sometimes two feet of water in the bottom of the parking lot, the whole parking lot.”
The pool contractor sent the photos of the corrosion to his supervisor with recommendations, and two days later, the building partially collapsed.
Three years ago,  an engineer found “major structural damage” and “abundant” cracking of columns and beams at the Champlain Towers South.
There are numerous photos within the report showing the deterioration of the building. One photo below:

According to the Miami Herald, a report, “Structural Field Survey Report,” was produced for the condo association in October 2018 by engineer Frank Morabito of Morabito Consultants. Morabito wrote that the “main issue” at Champlain Towers was that the pool deck and outdoor planters “laid on a flat structure,” preventing water from draining. The lack of waterproofing was “a systemic issue” that traced back to a flaw “in the development of the original contract documents” 40 years ago, the report said.


“Failure to replace waterproofing in the near future will cause the extent of the concrete deterioration to expand exponentially.”
The report clearly states that the repairs needed to be done soon and that they would be expensive…
Fast forward to comments from Pablo Rodriguez, whose mother and grandmother lived in the Champlain Towers:
Pablo Rodriguez told CNN:  “The board collects over a million dollars of maintenance fees from the unit owners every single year. Where was that money going? Because it wasn’t going to maintenance.”
“You see these pictures. How did they not tell people that it was in this horrible of a condition? The rebar was exposed, the contractor confirms that the maintenance doesn’t happen overnight like that…it’s, it’s shocking that they allowed it to get into this. It’s negligence, and their negligence caused a lot of death here.”

Admin
Posts : 108303
Join date : 2012-01-04
Location : Woodstock Nation
Miami Firefighter Finds Body of His Own Daughter While Searching Through Collapsed Condo Debris
Date: July 3, 2021Author: Nwo Report 0 Comments
The tragedy at the collapse of the Champlain Towers in Surfside, Florida, took a heartbreaking turn just last night. As the crew was searching through the debris, one Miami firefighter would make a gut-wrenching discovery.

Source: Leisa Audette
It’s hard to fathom, but a Miami firefighter was assisting with search operations when the body of his 7-year-old daughter was discovered.
Local10 reports one first responder at the scene said the girl was pulled from the rubble while her father was helping sift through the wreckage on Thursday night. After finding the young girl, the witness also said her father wrapped his daughter’s body in his jacket and placed a small American flag on the gurney as she was carried out.
The father, his brother, and others who helped dig the young girl out of the rubble escorted her body through a group of police and firefighters lined up on the roadway. The victim and her father were not identified.
During a press conference today,  Miami Fire Rescue Chief Joseph Zahralban confirmed the body of a seven-year-old girl was recovered during last night’s search and that she was the daughter of a first responder:
‘We can confirm that a member of our City of Miami Fire Department family has lost his seven-year-old daughter in the collapse.’
‘She was recovered last night by members of our Urban Search and Rescue Team, Florida Task Force 2.’
Miami Mayor Francis Suarez said the young girl was “a member of our fire family.”
The discovery of the young girl brings the death toll to 20.
The crews are continuing to work to try and find others, but it’s a tough job:

#MDFR #TRT & #FLTF1 are working in the basement parking garage at Champlain Towers. Firefighters continue working on locating possible victims, while dealing with heavy damage and changing conditions in the parking garage. #SurfsideBuildingCollapse 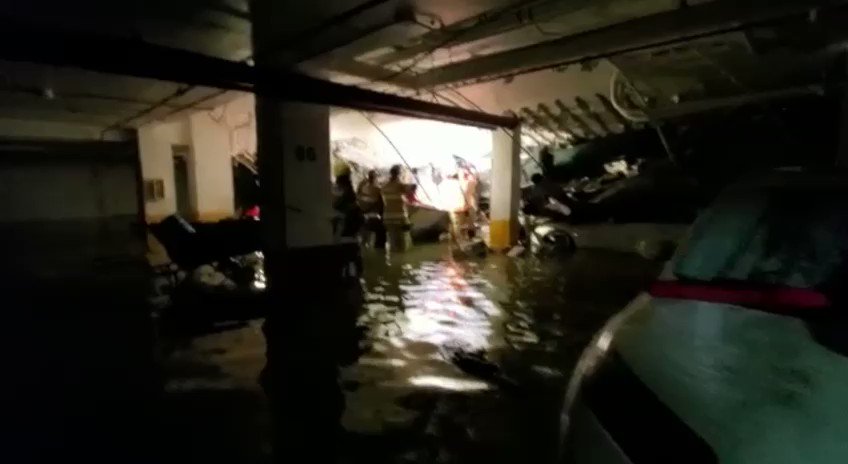 There is talk of demolishing the remainder of the building ahead of a tropical storm, but concerns about adding to the debris raise questions about whether it’s a good plan.
Information from Miami-Dade Rescue on how to help those impacted by this tragedy: