Images from space show California’s forests and lakes drying out in a record mega-drought Sun Jul 04, 2021 8:05 am 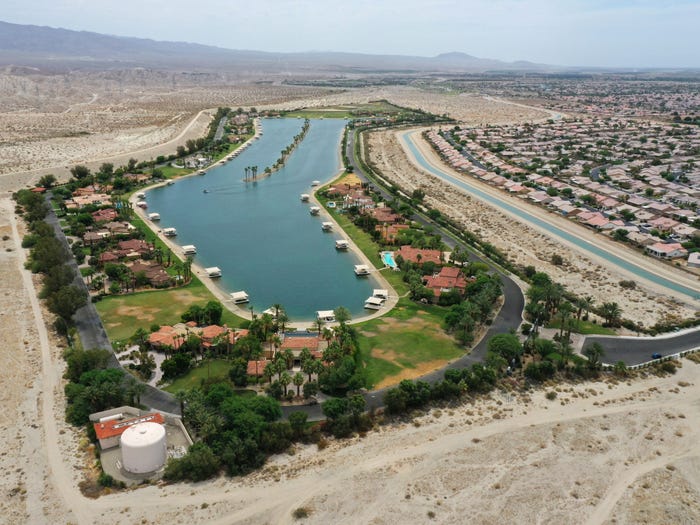 An artificial lake, Shadow Lake Estates, next to desert landscape in Indio, California on June 29, 2021.

The climate crisis is bearing down hard on the western US.
Historic drought and heat are converging on western states to create the perfect storm for depleted reservoirs, strained power grids, and rampant wildfires later this summer. The effects are so stark, you can see them from space.
Satellite images show that the hills outside Los Angeles are significantly more parched, brown, and dry than they were this time last year. Drag the slider back and forth on the below image to see the difference.https://flo.uri.sh/visualisation/6618439/embed?auto=1Interactive content by Flourish
“I’m worried about this summer,” Kathleen Johnson, a paleoclimatologist at the University of California, Irvine, told The Guardian. “This current drought is potentially on track to become the worst that we’ve seen in at least 1,200 years. And the reason is linked directly to human-caused climate change.”
In the US Drought Monitor’s 20-year history of tracking drought, the West and Southwest are drier than they’ve ever been. California Gov. Gavin Newsom has now declared drought emergencies in 41 of the state’s 58 counties, encompassing 30% of California’s population.
Shasta Lake is the largest reservoir in California and, like many western lakes, it has receded significantly over the past few months. NASA satellite images below show a bathtub ring — white layers of calcium carbonate and other minerals exposed when the water level drops — along the lake’s shorelines.https://flo.uri.sh/visualisation/6619466/embed?auto=1Interactive content by Flourish
The reservoir is at just 38% of its full capacity — 48% of the historical average, according to California’s Department of Water Resources.
California’s second-largest reservoir, Lake Oroville, has fallen to historically low levels, too. Normally, the lake’s water pumps through the Edward Hyatt Power Plant to generate electricity for 800,000 homes. But officials told CNN that they expect the low water levels will force the plant to close in late summer.https://be0c2d3ea18438746b68f84fcb758a2b.safeframe.googlesyndication.com/safeframe/1-0-38/html/container.html 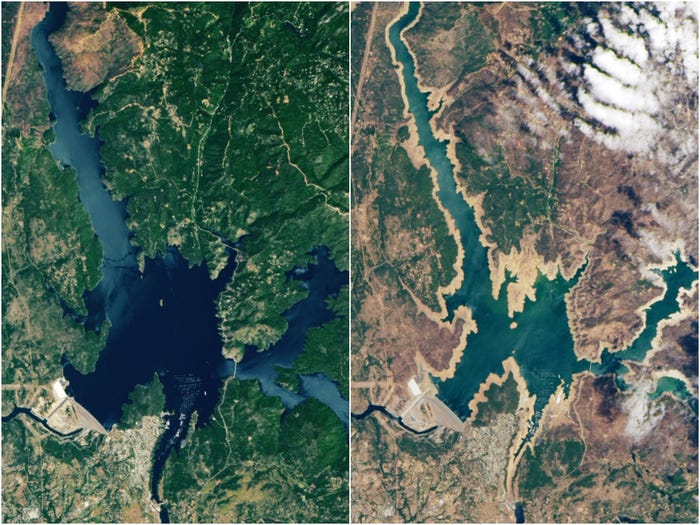 Lake Oroville, California’s second-largest reservoir, on June 4, 2019 (left) and June 9, 2021 (right).
“A lot of the slack in our system has already been used up,” Roger Pulwarty, a senior scientist in the National Oceanic and Atmospheric Administration (NOAA), told The Guardian.

An ever-growing body of research shows that drought events are becoming more common and more severe as human activity fills the atmosphere with heat-trapping pollutants like carbon dioxide and methane.
Rising global temperatures are changing the western US profoundly: Warmer air causes more moisture to evaporate, drying out soil. That raises the risk of drought and leaves forests full of tinder-dry foliage, primed for wildfires. 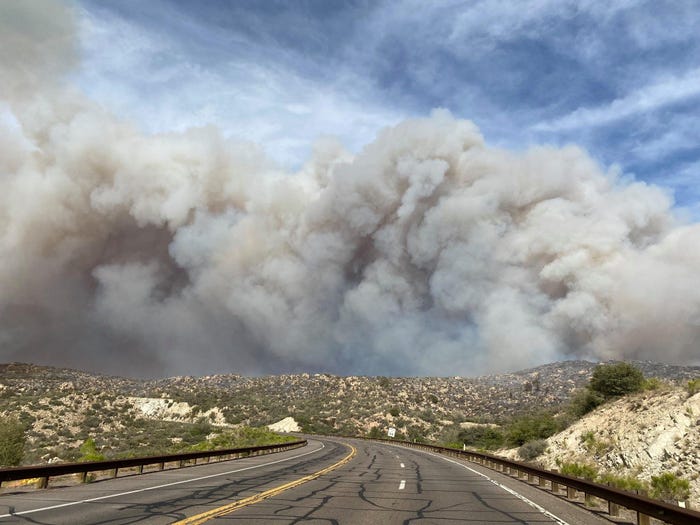 Smoke plumes rise from a wildfire in Arizona on June 7, 2021.
Heat waves only make the situation worse. They’re occuring three times more often and lasting about a day longer than they did in the 1960s, according to records of such waves across 50 US cities. They also start earlier and continue later into the year — the heat-wave season is 47 days longer than it was in the 1960s.
Two record-shattering heat waves struck western states in June. The first one washed over the Southwest and strained California’s power grid. Temperatures reached 116 degrees Fahrenheit in Las Vegas, Nevada; 115 degrees in Phoenix, Arizona; and topped 110 degrees for eight days straight in Tucson, Arizona. 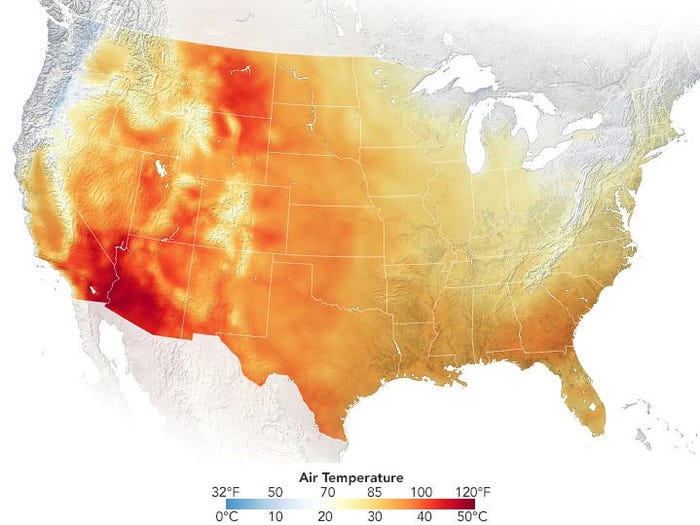 Air temperatures across the continental US during the afternoon of June 15, 2021.
The most recent heat wave rolled over the Pacific Northwest last weekend and sat there for several days.
Many of the cities that were hit hardest, including Seattle and Portland, have never experienced such temperatures — in some cases breaking their previous records by double digits. Temperatures in Lytton, a town in British Columbia, hit 116 degrees Fahrenheit — the highest temperature ever recorded in Canada. The town broke that record the following day, when temperatures climbed to 118 degrees.
It’s not yet clear how many people died from heat-related illness during the Pacific Northwest heat wave, but the Associated Press reported that the death toll is likely in the hundreds.https://be0c2d3ea18438746b68f84fcb758a2b.safeframe.googlesyndication.com/safeframe/1-0-38/html/container.html 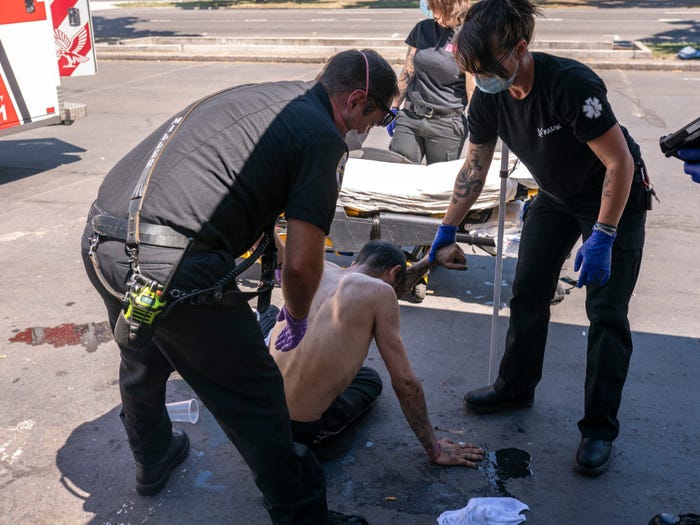 Emergency personnel help treat a man experiencing heat exposure at a cooling center during a heat wave in Salem, Oregon on June 26, 2021.
“Much of the western United States will continue the trend of hot and dry weather, much like the summer of 2020,” Brandon Buckingham, a meteorologist at AccuWeather, told Insider last month. “Each and every western heat wave throughout the summer will only heighten wildfire risks.”
Heat waves also prompt people to crank up air conditioners, causing energy demand to spike. This can strain the power grid and lead to rolling blackouts.