Prime minister says attack carried out by ‘armed commando group’ that included foreign elements
A report by Peter Beaumont and Tom Phillips for London’s Guardian.
The president of Haiti, Jovenel Moïse, has been assassinated in his home by a group of armed men who also seriously injured his wife, according to a statement and comments made by the country’s interim prime minister.
Speaking on a local radio station, Claude Joseph confirmed that Moïse, 53, had been killed, saying the attack was carried out by an “armed commando group” that included foreigners.
According to some reports and video published in the Miami Herald and elsewhere, Moïse’s killers claimed to be members of the US Drug Enforcement Administration (DEA) as they entered his guarded residence.
In videos circulating on social media, a man with an American accent is heard saying in English over a megaphone: “DEA operation. Everybody stand down. DEA operation. Everybody back up, stand down.”
“These were mercenaries,” a high-ranking Haitian government official said.
Residents also reported hearing gunshots and seeing men dressed in black running through the neighbourhood.
The attack took place at Moïse’s house in the Pelerin 5 district of Pétionville, a wealthy area with sometimes substantial and leafy villas in the hills above the capital, Port-au-Prince, with a reputation for being safe. It is an area critics of Moïse said he was loth to leave. 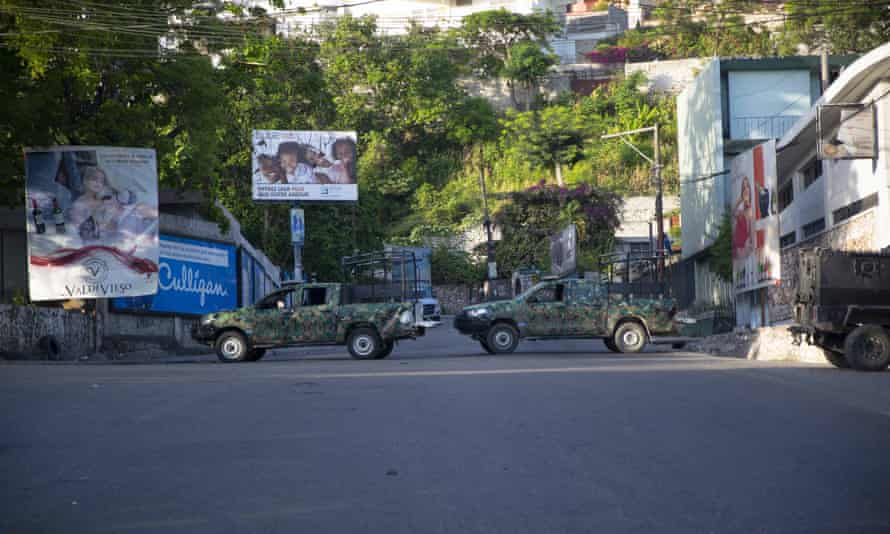 Military vehicles block the entrance to the neighbourhood where Jovenel Moïse lived.
“Around one o’clock in the morning, during the night of Tuesday 6 to Wednesday 7 July 2021, a group of unidentified individuals, including some speaking Spanish, attacked the private residence of the president and fatally injured the head of state,” Joseph said in a statement quoted in the media.Advertisement
Condemning “this odious, inhuman and barbaric act”, Joseph sought to reassure Haitians, saying the security situation in the country remained calm.
He said Moïse’s wife, Martine, had been seriously injured in the attack.
It happened barely 24 hours after Moïse had named a new prime minister, Ariel Henry, to take charge as head of the government and prepare the country for presidential elections in the next two months.
Boris Johnson, the UK prime minister, said: “I am shocked and saddened at the death of President Moïse. Our condolences are with his family and the people of Haiti. This is an abhorrent act and I call for calm at this time.”
Moïse, a former entrepreneur, was the anointed political successor of the former president Michel Martelly.
The assassination is likely to plunge the impoverished Caribbean nation into further turmoil after several years marked by political unrest and violence. The US embassy said it would be closed on Wednesday owing to the “ongoing security situation”, and the White House said Joe Biden was due to be briefed on the attack.
“We’re still gathering information,” the White House press secretary, Jen Psaki, said on MSNBC. “We’re still assessing right now.”
“It’s a horrific crime,” Psaki added in an interview with CNN. “We stand ready and stand by them to provide any assistance that’s needed.”
As details of the assassination emerged, the Colombian president, Iván Duque, also called on the Organisation of American States to send an urgent mission to “protect the democratic order in Haiti”.
Moïse’s time in office had been marked by an increase in political instability, allegations of corruption and a long-running dispute about when his period in office should end. He had been ruling by decree for more than a year after the country failed to hold legislative elections and wanted to push through controversial constitutional changes.
There have been intermittent periods of protests and street violence and a rise in gang violence, some of it tied to political parties. 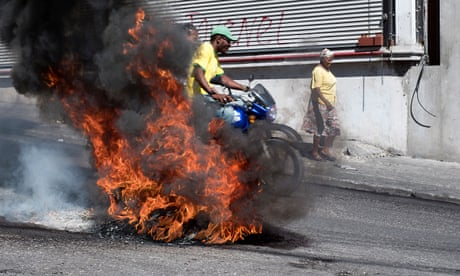 Haiti’s opposition claims Moïse should have stepped down on 7 February to coincide with the fifth anniversary of 2015 elections that were cancelled and then re-run a year later because of allegations of fraud. They allege that because Moïse failed to hold legislative elections in 2019 he violated the country’s 1987 constitution. His supporters rejected that argument, saying he only took power in 2017 after winning the re-run.
Instability has been exacerbated by the Petrocaribe scandal, a controversy that arose from a scheme to buy discounted oil from Venezuela on cheap credit. The idea was to free up funds for social schemes, but the money was pocketed by politicians.
Earlier this year amid allegations by Moïse of a coup attempt that planned to “murder him” and fresh protests, he moved to protect his position, ordering the arrest of 23 people including a supreme court judge and a senior police official, while declaring he was “not a dictator”.
Opponents had also accused Moïse’s government of fuelling political violence by providing gangs with guns and money to intimidate his adversaries.
The Caribbean country – the world’s first black republic after its revolution against French rule – has a history marked by poverty, authoritarian rule, political instability and external interference including a long US occupation. It has struggled to rebuild since a devastating earthquake in 2010 and Hurricane Matthew in 2016.