NEIL the con man KEENAN UPDATE - Riders On The Storm

Greetings. You may (or may not) know me. My name is Kevin, and I am trying to write a preface regarding the video of Neil Keenan which is directly below this.

Trying to encapsulate all that has gone on in this collective time of the past 13-14 years regarding Neil is like asking you to smell the number 9.
He is fighting hard every day to keep the cabal and Khazarians at a distance from successfully enacting their detailed and far reaching plans to eliminate in excess of 90 percent of the world’s population.

Heads of various elements of these very real and nefarious entities call Neil to try and bribe him to quit fighting.

The answer is always the same… why quit when we are winning?

We are at the point in this struggle to save humanity where it is now ‘war’.

In the video below, it will appear visually and sound like he is tired. Be assured that even though the fight is all consuming, the energy exists in Neil and his small group of people to go harder when the going gets toughest.

The Khazarians and Cabal, are global. They control what you eat, where you live, what you breathe, what you are allowed to say and do.

This latest global effort to socially re-engineer is the acceleration of their end game plans. Masks, vaccines, isolation, protocols etcetera established far in advance to make you fear something that is relatively harmless.

Well, Neil has many plans ready to be deployed in our fight to destroy them root and stem.

It is indeed a war, and we will seek them out to hold them accountable. No one will escape this. Neil has been taking them on for 13+ years, and is the only one that has seen, touched, heard and comprehended what is going on.

There are many urban legends and obfuscations circulating the Internet regarding Neil, many wonderous stories circulating and many self-aggrandizing ‘experts’ with ‘sources’ and ‘connections’ in high places with organizations that spin scenarios to make themselves become important, and personally profit from these stories.

So please allow me to tell you directly, from being with Neil every day for a while now, what is going on.

That is not what we do here. We go out, seek information, ingest what needs to be learned and factor that information into preparation of strategic and tactical plans. The real people we talk to are true experts and real world leaders from around the planet. These people don’t call the gossips or the pariahs profiting from the storytelling.

The world leaders and real experts call Neil – at any hour that strikes their fancy and needs. That’s how it works when you have earned the respect of these world leaders – based upon 13+ years of fighting and winning.

The last two things I would like to address before the video below is that we will be fighting on behalf of the world from a location that has entrusted and validated the purity of Neil’s soul.

We all have a soul contract, and Neil and his small band of warriors are fulfilling theirs, signed by each of us before we were born. The seat of that fight will be in a location that was long ago preordained.

Neil, for no known reason remembers having written an extensive paper in Grade 6 about Indonesia. His fights that lead to the filing of his Trillion Dollar Law Suit, again led him to Indonesia.

The trials to test the purity of his soul and the integrity needed to become Amanah happened in Indonesia. The Agreement signed by 29 Elders is hanging on the wall beside me as I type this, was signed in Indonesia. 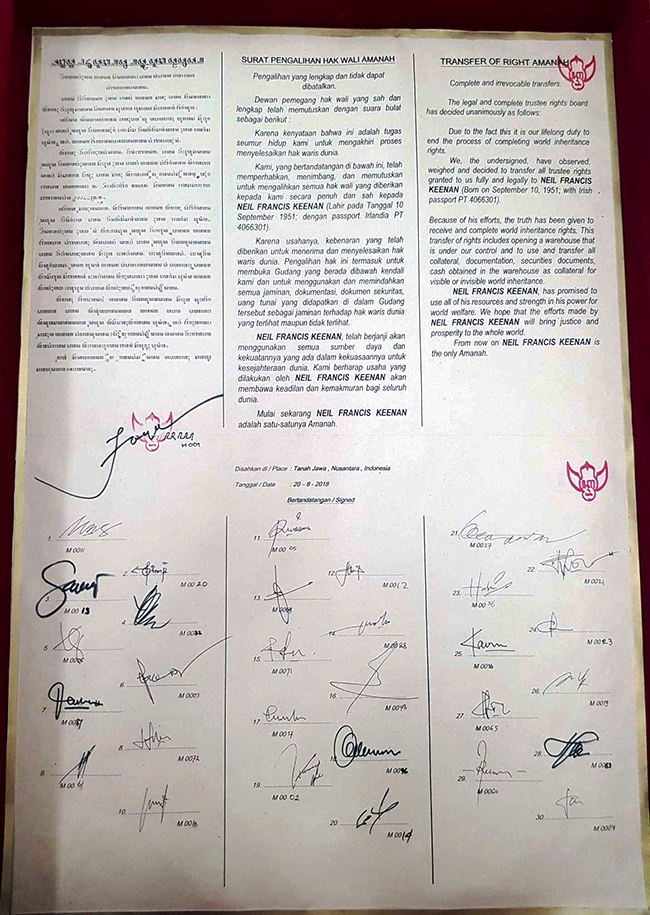 Indonesia already started the fight in refusing to give former US Senator and Secretary of State John Kerry the gold he demanded in a visit to Jakarta.

(NEIL KEENAN UPDATE | We’re Mad As Hell And We’re Not Gonna Take It Any More!) and has been the site of endless earthquakes and weather machine manipulations since.

This country stands strong. So the seat for the fight to save and free the world will start in and emanate out from Indonesia.

Not the USA nor any other terminally infected country.
We are at the end. Neil will be taking the fight to the enemy very soon, and with the Blessings of those that support our efforts in this and every dimension – we will fulfill our soul contracts and save humanity.

This is THE truth, not a truth, not a rumor nor a story. Please enjoy Neil’s message and thank you for reading this preface.
Very Respectfully,
Kevin