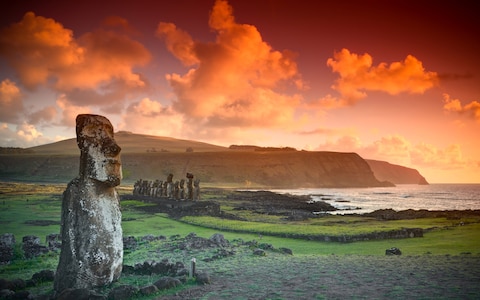 Easter Island (Rapa Nui in the native language), a small volcanic island in southeastern Polynesia, has long been the focus of debate regarding the impact of environmental and climatic changes on its human population. 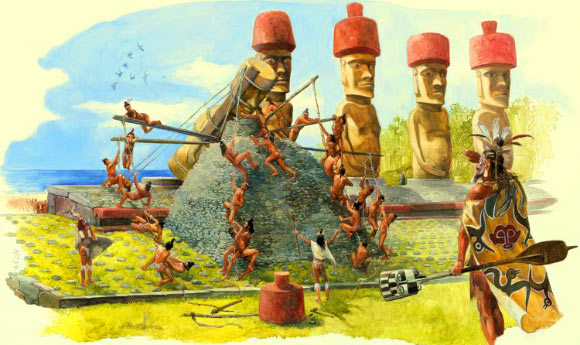 Santiago Caruso.
Initially settled by Polynesian voyagers between the 12th and 13th century CE, Easter Island is famous for the environmental changes that followed human arrival, the remarkable achievements of Rapanui people in megalithic construction, and long-standing debates surrounding demographic patterns preceding European contact.
Central to these debates is the assumption that unrestricted population growth and environmental degradation stemming from deforestation and cultivation ultimately led to a demographic and cultural collapse prior to European arrival in 1722.
Much of the basis for this narrative stems from the assumed incongruity of the island’s marginal environment, prolific monumental architecture, and small contact-era population size, which at the time of Dutch and Spanish visits in 1722 and 1770 was estimated to be no more than a few thousand.
Easter Island, however, was once covered in an extensive palm forest that by the time of European contact had largely disappeared due to the impacts of land-clearing for agriculture and the invasive Pacific rat.
The duration and consequences of deforestation have been debated, with many arguing for an ecological catastrophe whereby rapid forest removal caused widespread erosion, depletion of soil productivity, reduction in surface freshwater, and reduced carrying capacity.
“For Rapa Nui, a big part of scholarly and popular discussion about the island has centered around the idea that there was a demographic collapse, and that it’s correlated in time with climate changes and environmental changes,” said Dr. Robert DiNapoli, a postdoctoral researcher in the Department of Anthropology at Binghamton University.
“There are changes. Their population changes and their environment changes; over time, the palm trees were lost and at the end, the climate got drier,” said Professor Carl Lipo, also from the Department of Anthropology at Binghamton University.
“But do those changes really explain what we’re seeing in the population data through the radiocarbon dating?”
In the new study, the researchers used a method — called Approximate Bayesian Computation — that is able to both resolve the uncertainties and show how changes in population sizes relate to environmental variables over time. They found that the island experienced steady population growth from its initial settlement until European contact in 1722.
After that date, two models show a possible population plateau, while another two models show possible decline.
In short, there is no evidence that the islanders used the now-vanished palm trees for food, a key point of many collapse myths.
The new findings show that deforestation was prolonged and didn’t result in catastrophic erosion; the trees were ultimately replaced by gardens mulched with stone that increased agricultural productivity. During times of drought, the people may have relied on freshwater coastal seeps.
Construction of the moai statues, considered by some to be a contributing factor of collapse, actually continued even after European arrival.
In short, the island never had more than a few thousand people prior to European contact, and their numbers were increasing rather than dwindling.
“Those resilience strategies were very successful, despite the fact that the climate got drier. They are a really good case for resiliency and sustainability,” Professor Lipo said.
The results were published in the journal Nature Communications.
_____
R.J. DiNapoli et al. 2021. Approximate Bayesian Computation of radiocarbon and paleoenvironmental record shows population resilience on Rapa Nui (Easter Island). Nat Commun 12, 3939; doi: 10.1038/s41467-021-24252-z