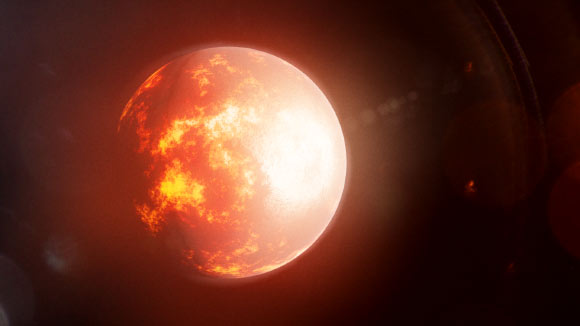 An artist’s impression of the potential lava world TOI-1807b. Image credit: NASA’s Goddard Space Flight Center / Chris Smith, KBRwyle.
TOI-2076 and TOI-1807 are young, bright K-type stars, dwarf stars more orange than our Sun.
They reside approximately 130 light-years away from Earth with some 30 light-years between them.
TOI-2076 is estimated to be about 204 million years old, while the age of TOI-1807 is 180 million years.
In 2017, astronomers using ESA’s Gaia satellite showed that the stars are traveling through space in the same direction.
Astronomers think the stars are too far apart to be orbiting each other, but their shared motion suggests they are related, born from the same cloud of gas.
Both TOI-2076 and TOI-1807 experience stellar flares that are much more energetic and occur much more frequently than those produced by our own Sun.
“The stars produce perhaps 10 times more UV light than they will when they reach the Sun’s age,” said Dr. George Zhou, an astronomer at the University of Southern Queensland.
“Since the Sun may have been equally as active at one time, these two systems could provide us with a window into the early conditions of the Solar System.”
TOI-2076 hosts three massive transiting exoplanets: TOI-2076b, c, and d.
The innermost planet, TOI-2076b, is 3.3 times Earth’s size and circles the star every 10.4 days.
The outer worlds, TOI-2076c and d, are 4.4 and 4.1 times larger than Earth, with orbits exceeding 17 days.
TOI-1807 hosts only one known planet, TOI-1807b, which is 1.8 times Earth’s size and orbits the star in just 13 hours.
“The planets in both systems are in a transitional, or teenage, phase of their life cycle,” said Dr. Christina Hedges, an astronomer at the Bay Area Environmental Research Institute and NASA’s Ames Research Center.
“They’re not newborns, but they’re also not settled down. Learning more about planets in this teen stage will ultimately help us understand older planets in other systems.”

The ages of both systems suggest that their planets may be somewhere in the middle of their atmospheric evolution.
TOI-2076b receives 400 times more UV light from its star than Earth does from the Sun, and TOI-1807b gets around 22,000 times more.
Dr. Zhou, Dr. Hedges and their colleagues are particularly interested in TOI-1807b because it’s an ultra-short period planet.
Theoretical models suggest it should be difficult for worlds to form so close to their stars, but they can form farther out and then migrate inward.
Because it would have had to form and migrate in just 180 million years, TOI-1807b will help astronomers further understand the life cycles of these types of planets.
If it doesn’t have a very thick atmosphere and its mass is mostly rock, the planet’s proximity to its star could potentially mean its surface is covered in oceans or lakes of molten lava.
“Many objects we study in astronomy evolve on such long timescales that a human being can’t see changes month to month or year to year,” said Dr. Trevor David, an astronomer in the Center for Computational Astrophysics at Flatiron Institute.
“If you want to see how planets evolve, your best bet is to find many planets of different ages and then ask how they’re different.”
“The discovery of the TOI-2076 and TOI-1807 systems advances our understanding of the teenage exoplanet stage.”
The team’s paper was published in the Astronomical Journal.
_____
Christina Hedges et al. 2021. TOI-2076 and TOI-1807: Two Young, Comoving Planetary Systems within 50 pc Identified by TESS that are Ideal Candidates for Further Follow Up. AJ 162, 54; doi: 10.3847/1538-3881/ac06cd