Watch Jeff Bezos get launched into space
The richest man in the world and three others are set for liftoff Tuesday morning
By  Joey Roulette    Jul 19, 2021


Jeff Bezos, the richest man in the world, is flying to space Tuesday morning on his company’s suborbital rocket. He’s riding with a motley crew of three other passengers: his brother Mark, 82-year-old aviation icon Wally Funk, and 18-year-old Dutch high school grad Oliver Daemen.
The mission, called NS-16, will mark the first time Blue Origin sends humans to space. Bezos will become the second billionaire to fly a rocket he helped fund, after Virgin Galactic founder Richard Branson launched on his company’s rocket-plane to space on July 11th. Daemen will be the youngest person to fly to space and Funk, a lively firebrand aviator who trained as an astronaut in the ‘60s but never made it to space, will be the oldest.
“The launch crew is ready, the vehicle is ready, the crew is ready...”

What time is Jeff Bezos going to space?

New Shepard’s liftoff is on track for 9AM ET. Some early Tuesday morning storms are predicted to clear up before then, the company said on Sunday. The whole mission should last about 10 minutes. 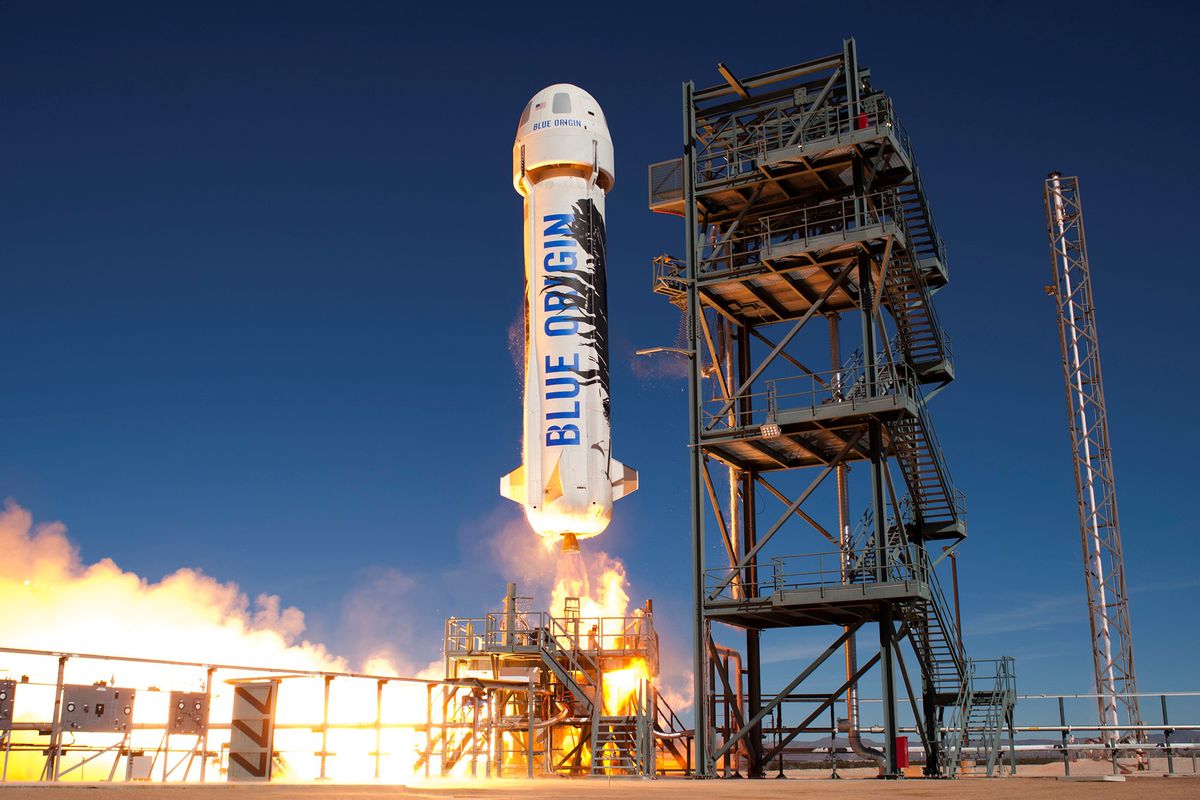 The New Shepard rocket. Image: Blue Origin
“The launch crew is ready, the vehicle is ready, the crew is ready, and the flight director is ready,” Blue Origin’s NS-16 flight director Steve Lanius told reporters on Sunday. The 6-story-tall New Shepard will lift off from Blue Origin’s rocket facilities in Van Horn, a remote town in the western desert of Texas. The crew capsule will detach from the New Shepard booster at an altitude of roughly 62 miles to spend a few minutes in the weightlessness of microgravity where the crew can see the curvature of Earth. By about that time, the rocket booster will have landed vertically not far from where it launched. The crew capsule will return minutes later under a set of parachutes.
The youngest passenger, Daemen, is filling in for the mystery winner of Blue Origin’s New Shepard seat auction that closed at $28 million last month. That wealthy winner had “schedule conflicts” and wasn’t able to fly, according to Blue Origin. Daemen’s father Joes Daemen, the founder and CEO of a private equity firm based in the Netherlands, participated in the Blue Origin auction and was poised to fly on the next New Shepard mission, but gave his seat to his son.
For other launch companies like SpaceX and Virgin Galactic, a rocket’s first crewed launch usually includes heavily trained test pilots to monitor the crew cabin and stand ready if things go awry. But Blue Origin decided to throw its founder Bezos and its first paying customer, Daemen, on board because its New Shepard crew capsule is fully autonomous, requiring no input from humans during the mission.
“We know the vehicle is safe. If the vehicle is not safe for me, it’s not safe for anyone,” Bezos told CNN in an interview Monday morning. Blue Origin wouldn’t have had any use for test pilots on its crew capsule, the company’s CEO Bob Smith said. “We didn’t see any value, quite honestly, from doing things step wise in that approach ... Seeing that this is an autonomous vehicle, there’s really nothing for a crew member to go do.” He added that there were some evaluations that Blue Origin has tasked some of the passengers to undertake during the flight (it’s unclear which passengers, though).

How to watch Bezos’ spaceflight

Blue Origin will have a Youtube livestream beginning at 7:30AM ET Tuesday ahead of liftoff posted on its website. Tune in before 9:00AM ET to make sure you don’t miss the action. For other mission updates leading up to launch, you might want to check Bezos’ Instagram. He’s been uploading all sorts of pre-launch video reels with him and his crew.

» Jeff Bezos Heading To Space After Resigning As Amazon CEO
» Branson is now set to beat Bezos to space
» Bezos Predicts Only A Select Few Will Stay On Our Planet With Millions Moving To Space
» Jeff Bezos’ Washington Post hit piece on Mercola.com
» Outer Space Affairs - You DON'T Have A Right To Know - Just Watch