OUT OF MIND » THE INSANITY OF REALITY » GOVERNMENTS & THE NEW WORLD ORDER » Capitol 'Rioter' Sentenced To 8 Months, Not Accused Of Assaulting Anyone Or Damaging Property

Capitol 'Rioter' Sentenced To 8 Months, Not Accused Of Assaulting Anyone Or Damaging Property

Capitol 'Rioter' Sentenced To 8 Months, Not Accused Of Assaulting Anyone Or Damaging Property Tue Jul 20, 2021 8:28 am

A Florida man who was let into the US Capitol on January 6th was sentenced to eight months in prison - the first such sentence for a felony case in the Capitol 'riot.' 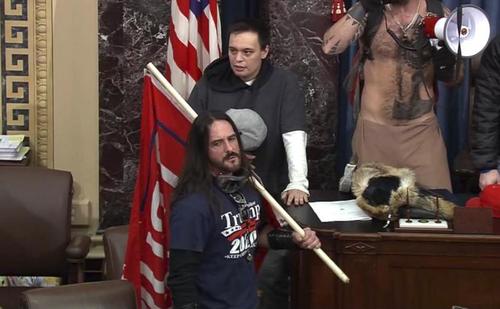 The man, Paul Allard Hodgkins, was not charged with property destruction or assault - yet "contributed to the collective threat to democracy," according to prosecutors, who sought 18 months.
Hodgkins apologized and said he was ashamed of his actions, describing how he was caught up in the euphoria as he followed a crowd of hundreds into the Capitol.
"If I had any idea that the protest … would escalate (the way) it did … I would never have ventured farther than the sidewalk of Pennsylvania Avenue," he told the judge, adding "This was a foolish decision on my part," according to the Associated Press.
Meanwhile, hundreds of Antifa and BLM rioters, looters and vandals have had their charges dropped across the country.

In pronouncing the sentence, Judge Randolph Moss said that Hodgkins had played a role, if not as significant as others, in one of the worst episodes in American history. Still he chose to give Hodgkins a year less in prison.
“That was not, by any stretch of the imagination, a protest,” Moss said. “It was … an assault on democracy.” He added: “It left a stain that will remain on us … on the country for years to come.”
The sentencing could set the bar for punishments of hundreds of other defendants as they decide whether to accept plea deals or go to trial. Hodgkins and others are accused of serious crimes but were not indicted, as some others were, for roles in larger conspiracies.
Under an agreement with prosecutors, he pleaded guilty last month to one count of obstructing an official proceeding, which carries a maximum 20-year prison sentence. In exchange, prosecutors agreed to drop lesser charges, including entering a restricted building and disorderly conduct. -AP

According to Assistant US Attorney Mona Sedky, while Hodgkins didn't engage in violence, he walked among many who did in "the ransacking of the People's House."
"What does he do?" Sedky asked the court. "He walks toward it. He doesn’t walk away," adding that Hodgkins was among a mob that forced lawmakers and staffers to seek shelter throughout the building, and may "bear emotional scars for many years — if not forever."
Hodgekins' defense attorney slammed the use of the phrase "domestic terrorism" by government prosecutors, saying in court on Monday that the term is "offensive and gaslighting the country, and it needs to stop.... It was a protest that became a riot, period, full stop."

OUT OF MIND » THE INSANITY OF REALITY » GOVERNMENTS & THE NEW WORLD ORDER » Capitol 'Rioter' Sentenced To 8 Months, Not Accused Of Assaulting Anyone Or Damaging Property