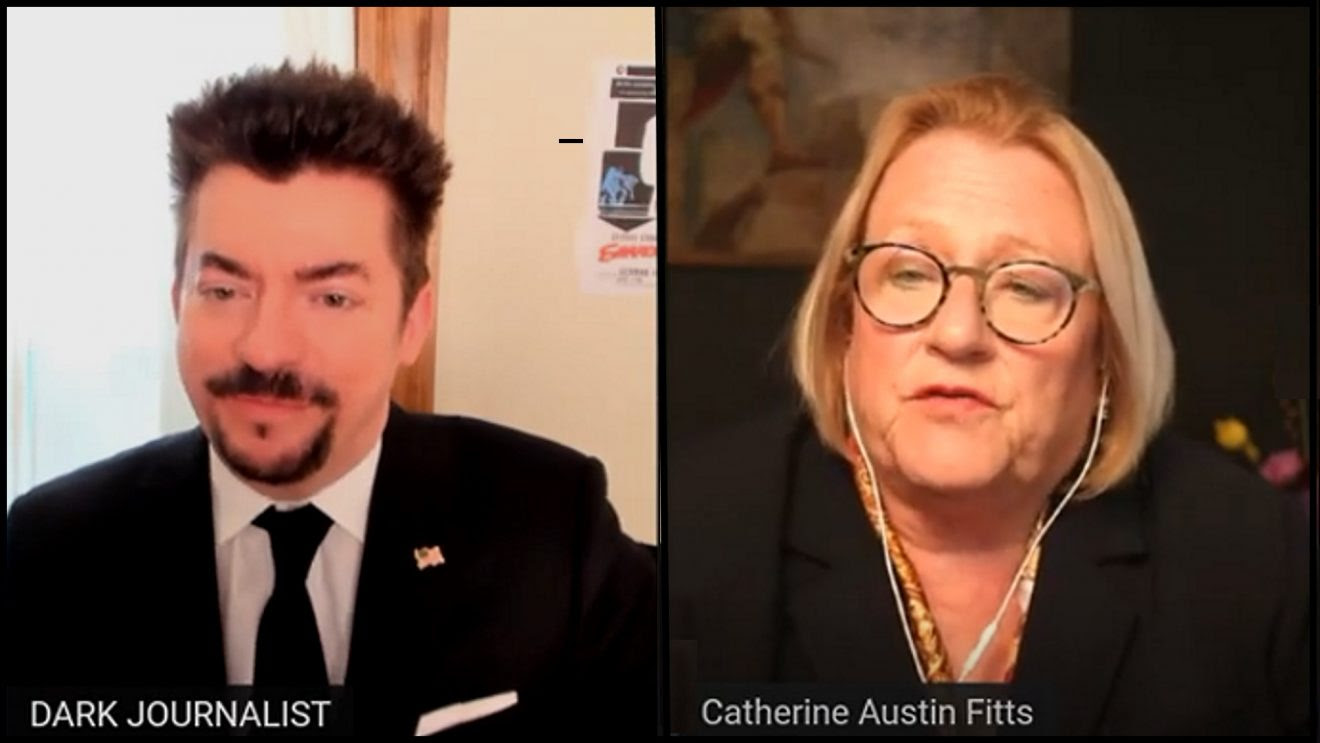 Bankers agreed during FED meeting in Jackson Hole, Wyoming to take down the economy with earth shattering implications for millions.

CENSORED BY MEDIA AND TECH OLIGARCHS
Dark Journalist Daniel Liszt goes deep with Former Assistant HUD Secretary and Wall Street Investment firm Dillon Read and Co. partner Catherine Austin Fitts in these fascinating new interview clips dealing with Central Bank Digital Control (CDBC) and the Going Direct Reset.
CENTRAL BANKING WARFARE MODEL
Catherine reveals how the Central Banking Warfare model has been utilized to bring us to the brink of world dictatorship while putting a Transhumanist control grid in place for total domination of human life.
“A re-engineering of the financial transaction system as part of a larger re-engineering of the global governance system. And when I say ‘re-engineering’, part of that is a consolidation of the financial coup.”

Catherine’s revelations about the central banking warfare model and the transhumanist takeover of society have become more censored than at any time, as the establishment and tech oligarchs fear her message of the coming takeover of the United States and dismantling of our freedoms.
Catherine has identified trillions in missing money from the DOD and HUD, and has given us a behind-the-scenes look at the governing political structure in America and its implications for the world.

In 1998, I said, ‘You know something, I don’t care. You know, throw me out of every club. Never speak to me again. I want nothing to do with your plan… This will never work. I don’t want to be a part of it.

We have central bankers and we have citizens. Okay? So let’s say we have 100 citizens. But we have two citizens called private equity. Okay? … We can make up names called BlackRock and Carlisle. Okay?
And so the central bankers print money out of thin air, three trillion dollars, and they say to their friends here’s the three trillion dollars. Go buy up all the assets. And their friends say ‘Well, you know. that could be very inflating. What should we do? How can we knock the prices down and make sure, you know, that that doesn’t set off hyperinflation?’ And the central bankers say, ‘Well how about if we shut down all the whole mainstream economy? Because then you can pick everything up cheap. They can’t compete against you. So you can pick everything up for a much lower price… and that will be so deflating, it’ll offset the the hyperinflation created by printing this money.’ Okay? So he shuts down more economies, destroys more families, kills more people.
And that’s how the game plays. So now they’ve got three trillion dollars and what are they gonna buy? They’re gonna buy everything. Right?
So they buy houses, they buy real estate. Because you want to institute the smart grid. Right? And so you’ve got to reengineer all the systems. But, more importantly — once the smart grid’s in place and you bring in all sorts of new technology, including lowering the energy crisis. The way you make money on that new technology is by the real estate going up in value. Right?..
And so it’s really cheap, particularly if you can get the price low and buy with money that’s printed for free…

You know, I call it the great poisoning. And, in my opinion, the American people are being poisoned. And it’s intentional.
But if you look at the difference between somebody who makes a concerted effort not to go along with the plan and somebody goes along with the plan, you know, you’re talking about two very different… The people who will take responsibility and not go with the flow can have very, very successful lives.

It’s a split that’s occurring, would you say? You talked about people speaking about building a new civilization.

I can’t tell you how many people in the last month — talented, educated, professional, successful people saying ‘you know something, we have to start a new civilization. I’m out. I want nothing to do with these people.’

This society, the way it’s constructed — and what we’re looking at, particularly in America now, is that you literally have to have uni-thought across the board.

Well, America — what is happened to America is the rate of entropy has reached an unbearable level.

So the question is, what are the reasons? And how many people are they willing to kill to implement the system?
Because it looks to me like this is… you know, this is experimental. They don’t have this figured out yet. And they want to go really fast. And I think they’re going to kill millions of people — getting ‘whatever they’re planning on getting implemented’ implemented.

This is a fraudulent inducement on a global massive scale. This is debt entrapment. This is predatory lending. This is every name of every financial fraud. So you are using the ability to create digital assets to kill people.
…Think of this as clean genocide. Silent genocide…

Entrainment causes you to feel pleasure and open, and then the subliminal message comes in. It gets you to resonate things….One of the ways we discern whether something’s true or not is ‘does it resonate’. And it gets you to falsely resonate. You know, it tricks you into resonating for something you would never resonated with…if you didn’t have that reservation sensation.

You’ve spoken about this before which is, if I can remove your gender identification, for example — if I can remove any sense of that by not allowing you to say him or her or anything like that — I can actually then strip away your personhood at a certain point, which is, in fact, the point behind the whole thing.

Well I think there are a couple things. One is, I believe, if you can strip away sex it makes it much in easier to integrate robots into the labor system and the labor taxation system…
And that’s not to mention the fact that…they think they can grow up babies in incubators. And if they want to control the genetics of the babies to come into the world, then it’s very convenient if you can destroy the family…

You know, we need to focus on food, clothing, shelter, water. And, what I will tell you is, ultimately our political power depends on creating and circulating money locally…
And just start using all cash on Friday. Just make a commitment.
…And teaching the local, small businesses, and the local banks and credit unions, that they’re going to get squeezed out if we go to an all digital system.