Along with analyzing rocks using X-rays and ultraviolet light, NASA’s Perseverance rover will zoom in for close-ups of rock surfaces that might show evidence of past microbial activity in Jezero Crater, the landing site of the Mars rover. 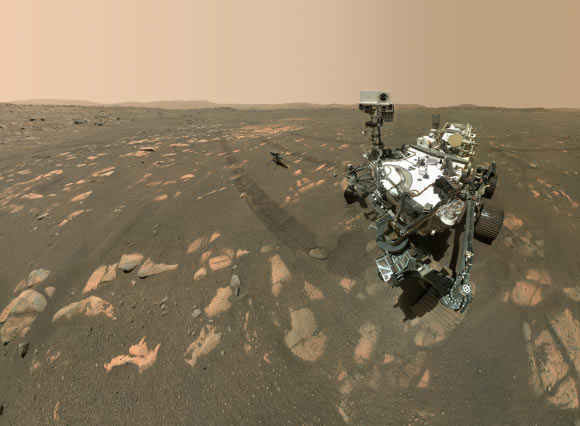 This image was taken by the WATSON camera on the robotic arm of Perseverance on April 6, 2021 (46th Martian day, or sol, of the mission). Image credit: NASA / JPL-Caltech / MSSS.
Jezero Crater is a 49-km- (30.4-mile) wide crater located on the western edge of Isidis Planitia on Mars.
Planetary scientists believe the area was once flooded with water and was home to an ancient river delta.
“If life was there in Jezero Crater, the evidence of that life could be there,” said Dr. Abigail Allwood, a researcher at NASA’s Jet Propulsion Laboratory.
“Perseverance’s X-ray instrument, called the Planetary Instrument for X-ray Lithochemistry (PIXL), delivered unexpectedly strong science results while it was still being tested.”
“Located at the end of the arm, the lunchbox-size instrument fired its X-rays at a small calibration target — used to test instrument settings — aboard the rover and was able to determine the composition of Martian dust clinging to the target.”
“We got our best-ever composition analysis of Martian dust before it even looked at rock.”
“That’s just a small taste of what PIXL, combined with the arm’s other instruments, is expected to reveal as it zeroes in on promising geological features over the weeks and months ahead.” 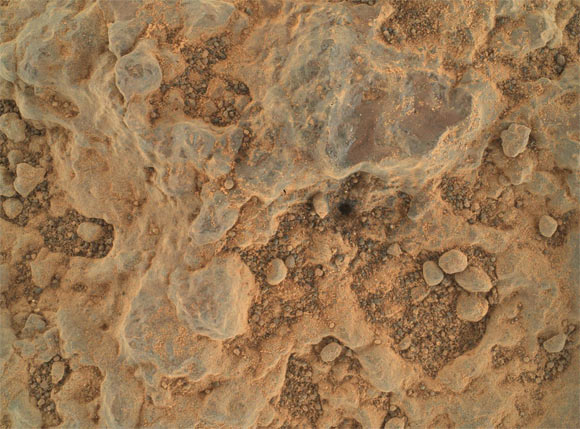 NASA’s Perseverance rover took this close-up of a rock target nicknamed ‘Foux’ using its WATSON camera on the end of the rover’s robotic arm. The image was taken July 11, 2021 (139th Martian day, or sol, of the mission). Image credit: NASA / JPL-Caltech / MSSS.
To get a detailed profile of rock textures, contours, and composition, PIXL’s maps of the chemicals throughout a rock can be combined with mineral maps produced by the Scanning Habitable Environments with Raman & Luminescence for Organics & Chemicals (SHERLOC) instrument and its partner, WATSON.
SHERLOC uses an ultraviolet laser to identify some of the minerals in the rock, while WATSON takes close-up images that scientists can use to determine grain size, roundness, and texture, all of which can help determine how the rock was formed.
“Early WATSON close-ups have already yielded a trove of data from Martian rocks such as a variety of colors, sizes of grains in the sediment, and even the presence of ‘cement’ between the grains,” the researchers said.
“Such details can provide important clues about formation history, water flow, and ancient, potentially habitable Martian environments.”
And combined with those from PIXL, they can provide a broader environmental and even historical snapshot of Jezero Crater.
“What is the crater floor made out of? What were the conditions like on the crater floor?” said SHERLOC’s principal investigator Dr. Luther Beegle, also from NASA’s Jet Propulsion Laboratory.
“That does tell us a lot about the early days of Mars, and potentially how Mars formed.”
“If we have an idea of what the history of Mars is like, we’ll be able to understand the potential for finding evidence of life.”