OUT OF MIND » CHANGING ENVIRONMENT & NATURE » EARTH CHANGES » Wildfires have erupted across the globe, scorching places that rarely burned before

Wildfires have erupted across the globe, scorching places that rarely burned before

Wildfires have erupted across the globe, scorching places that rarely burned before Fri Jul 23, 2021 9:47 am

https://www.cnn.com/2021/07/22/world/wildfires-siberia-us-canada-climate-intl/index.html
By Ivana Kottasová, CNN
Photo editor Sarah Tilotta, CNN
Updated 6:16 AM ET, Thu July 22, 2021
(CNN)Yakutsk in Russian Siberia is known as the world’s coldest city. In a place where even an exposed nose during the winter months can cause biting pain, people are accustomed to taking precautions against freezing temperatures, including spending extra time in the morning to dress in many layers.But now the city is blanketed in haze as nearby wildfires tear through forests that have been parched by weeks of heatwaves. The fires are so big, and the winds strong, smoke is traveling as far away as Alaska.In the US, the Bootleg wildfire in Oregon has grown into a monstrous complex with its own weather, sending the dense smoke some 3,000 miles across one end of the continent to the other. New York City on Wednesday woke up to an intense red sunrise, the smell of wildfires and a thick brown haze.Firefighters in both countries, as well as British Columbia in Canada, are fighting a near-impossible battle to smother the infernos with water bombs and hoses, and preventing their spread by digging firebreaks. 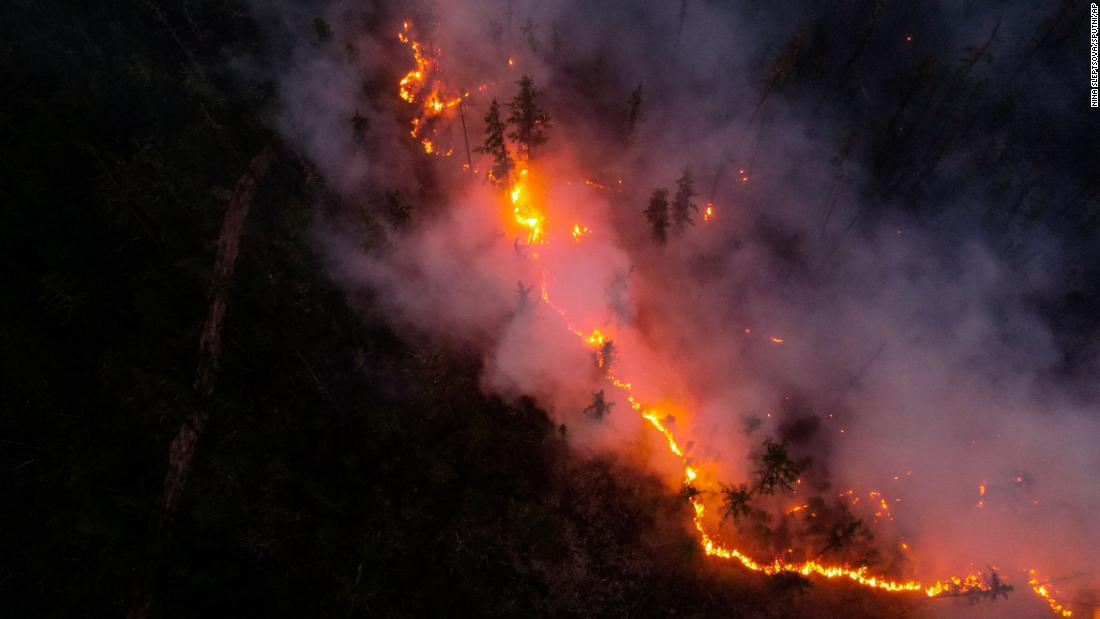 An aerial view shows a wildfire in Yakutia, Russia. 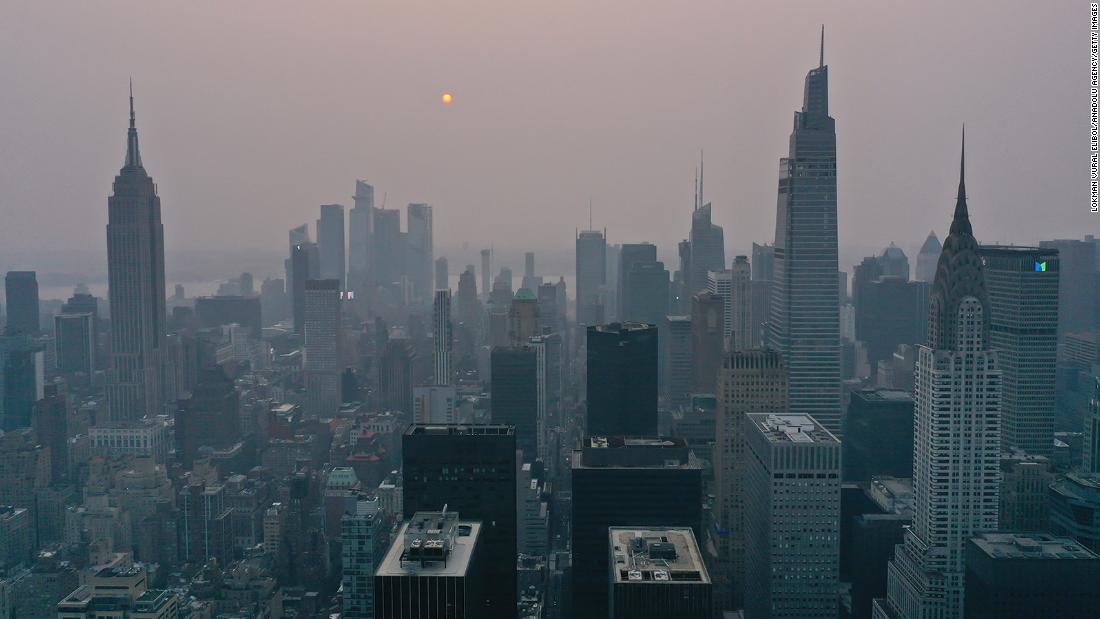 Wildfires burning out of control across the western US send haze across the continent to New York City, on July 20.The smoke in the republic of Yukutia in Siberia was so thick on Tuesday that reconnaissance pilot Svyatoslav Kolesov couldn’t do his job. There was no way he could fly his plane in such poor visibility.Kolesov is a senior air observation post pilot in the far eastern Russian region of Yakutia. This part of Siberia is prone to wildfires, with large parts of the region covered in forests. But Kolesov told CNN the blazes are different this year.Enter your email to subscribe to the CNN Fareed Zakaria global analysis newsletter.close dialog
Receive Fareed Zakaria’s Global Analysisincluding insights and must-reads of world newsActivate Fareed’s BriefingBy subscribing you agree to ourprivacy policy.“New fires have appeared in the north of Yakutia, in places where there were no fires last year and where it had not burned at all before,” he said.Kolesov is seeing first hand what scientists have been warning about for years. Wildfires are becoming larger and more intense and they are also happening in places that aren’t used to them.”The fire season is getting longer, the fires are getting larger, they’re burning more intensely than ever before,” said Thomas Smith, an assistant professor in Environmental Geography at the London School of Economics. 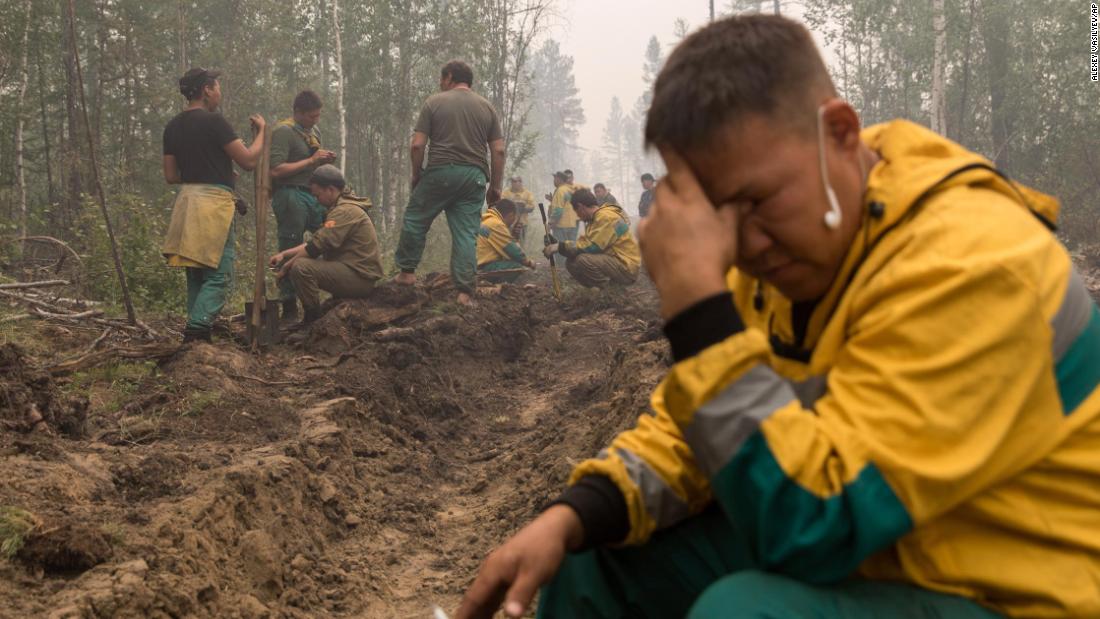 Employees of the forest protection service Yakutlesresurs rest as they dig a firebreak moat to stop a fire outside Magaras village in Yakutia.Many factors, like poor land management, play a role in wildfires, but climate change is making them more frequent and intense. Most of Europe, the Western US, southwest Canada and some regions of South America experienced drier-than-average conditions in June, according to the Copernicus Climate Change Service, making tinderboxes of forests.The wildfires in Yakutia have consumed more than 6.5 million acres since the beginning of the year,​ according to figures published by the country’s Aerial Forest Protection Service. That’s nearly 5 million football fields.[url=https://www.cnn.com/interactive/2020/weather/wildfire-and-air-quality-tracker/embed.html?z=7.5&lnglat=-121.0981,42.60924&i=OR&l=s&hed=Latest growth of the Bootleg]https://www.cnn.com/interactive/2020/weather/wildfire-and-air-quality-tracker/embed.html?z=7.5&lnglat=-121.0981,42.60924&i=OR&l=s&hed=Latest%20growth%20of%20the%20Bootleg%20fire&initialWidth=930&childId=fire-tracker-embed&parentTitle=Wildfires%20have%20erupted%20across%20the%20globe%2C%20scorching%20places%20that%20have%20never%20burned%20before%20-%20CNN&parentUrl=https%3A%2F%2Fwww.cnn.com%2F2021%2F07%2F22%2Fworld%2Fwildfires-siberia-us-canada-climate-intl%2Findex.html[/url] 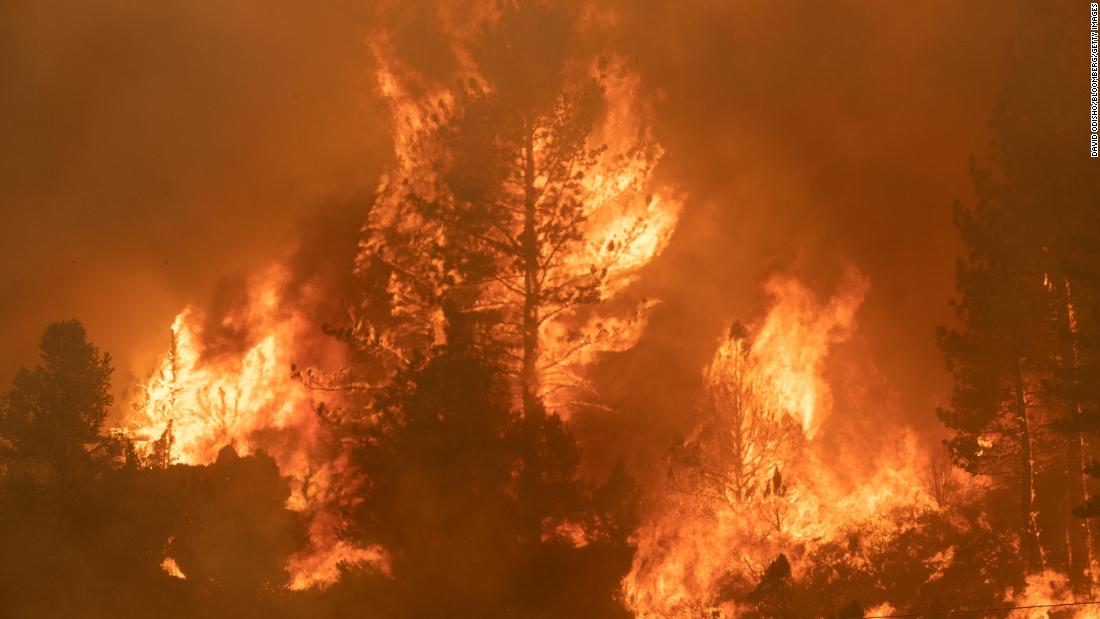 Trees burn along Highway 89 during the Tamarack Fire in the Californian city of Markleeville on July 17.In Oregon, eight fires have burned nearly 475,000 acres so far, in a fire season officials said was unlike any they’ve seen before. The Bootleg Fire is so large and generating so much energy and extreme heat that it’s creating its own clouds and thunderstorms.The Canadian province of British Columbia declared an emergency due to wildfires there effective Wednesday. Nearly 300 active wildfires have been reported in the province. 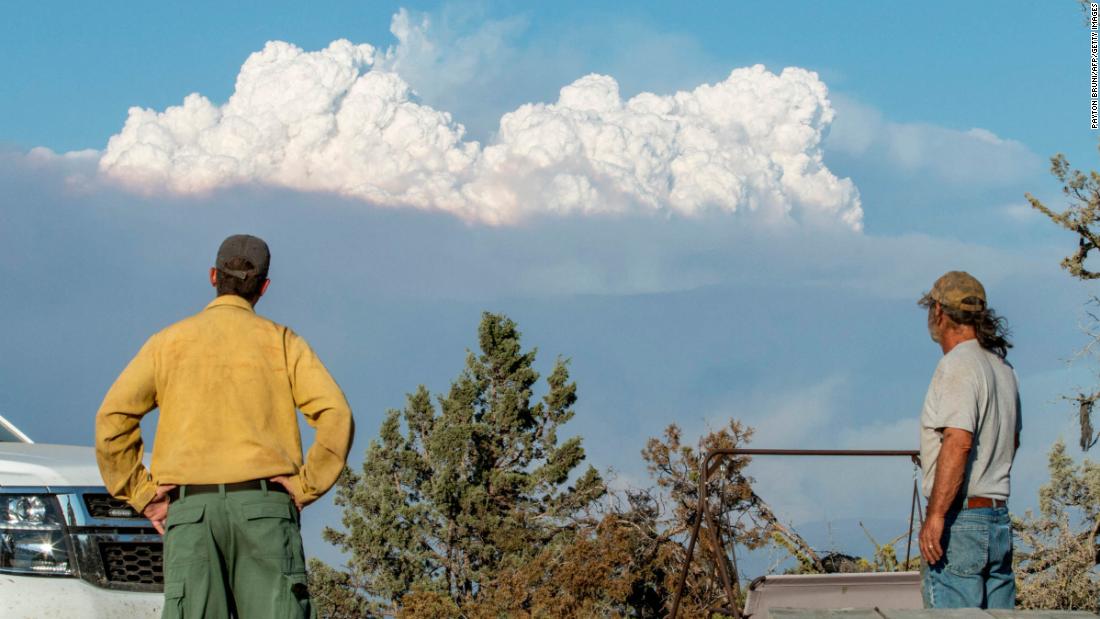 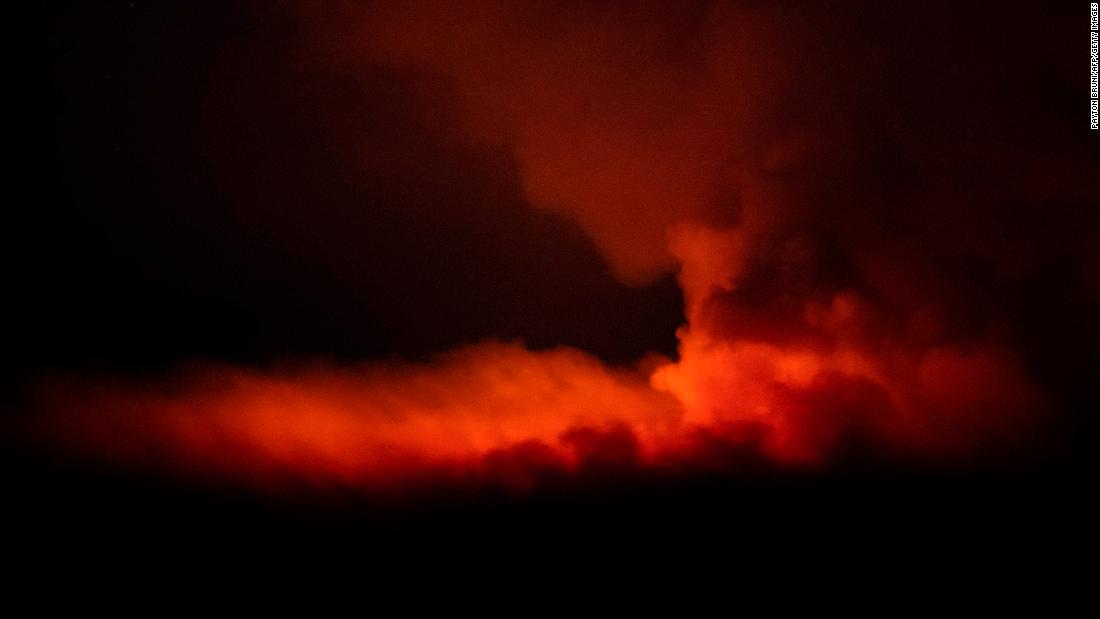 The Bootleg Fire illuminates the sky at night near Bly in Oregon on July 16.The wildfires are part of a vicious climate cycle. Not only is climate change stoking the fires, but their burning releases even more carbon into the atmosphere, which worsens the crisis.Some scientists say this year’s fires are particularly bad.”Already by mid July, the total estimated emissions is higher than a lot of previous years’ totals for summer periods, so that’s showing that this is a very persistent problem,” said Mark Parrington, senior scientist at the Copernicus Atmosphere Monitoring Service.He said Yakutia has been experiencing high-intensity fires continuously since the last few days of June.”If I look at the time series, we see sort of equivalent levels of intensity, but for not for three weeks, you know, I think the longest one prior was maybe a couple of weeks or 10 days or something like that, so much more isolate,” he said, adding that the fire season usually lasts until mid August, so it’s likely the fires could continue.

Smith said that while parts of Siberia and Canada have always experienced wildfires, the worry is that the fires are now becoming so much more frequent.”Once upon a time, you had a fire every 100 to 150 years in one location, which means the forest completely regenerates and you end up with a mature forest, and then the fire comes along, and then you start again,” he said.”What we’re seeing in some parts of Eastern Siberia is the fires are happening every 10 to 30 years now, in some places, and what that means is the forest is not going to be able to become mature, and you end up with an [ecosystem] shift to kind of a shrub land or swampy grassland.” 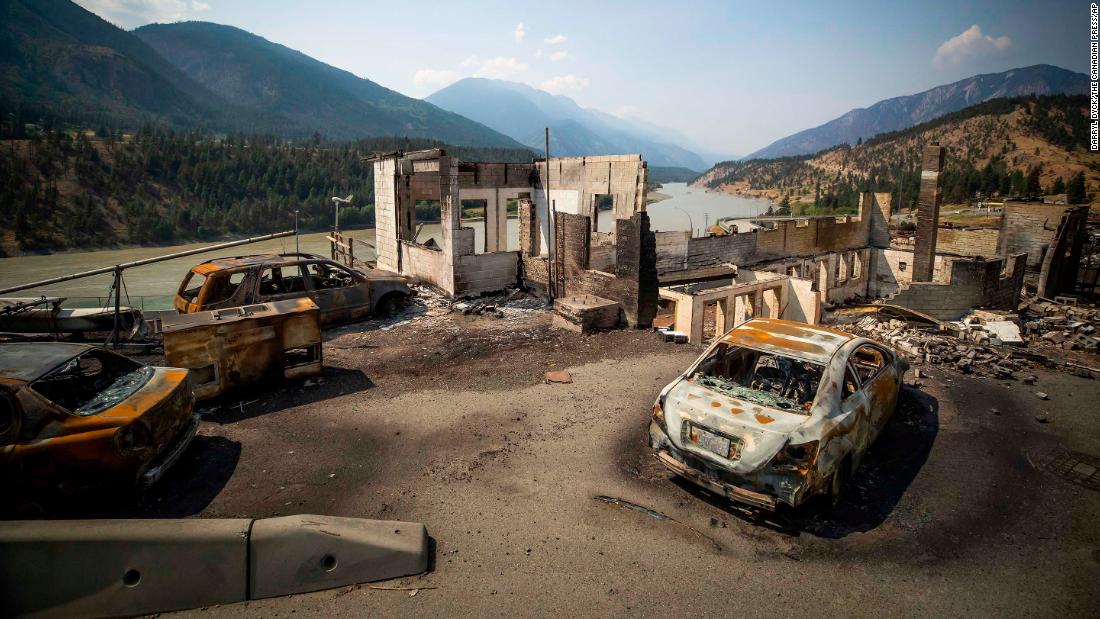 Burned cars and structures are seen in Lytton, British Columbia, on Friday, July 9, 2021. 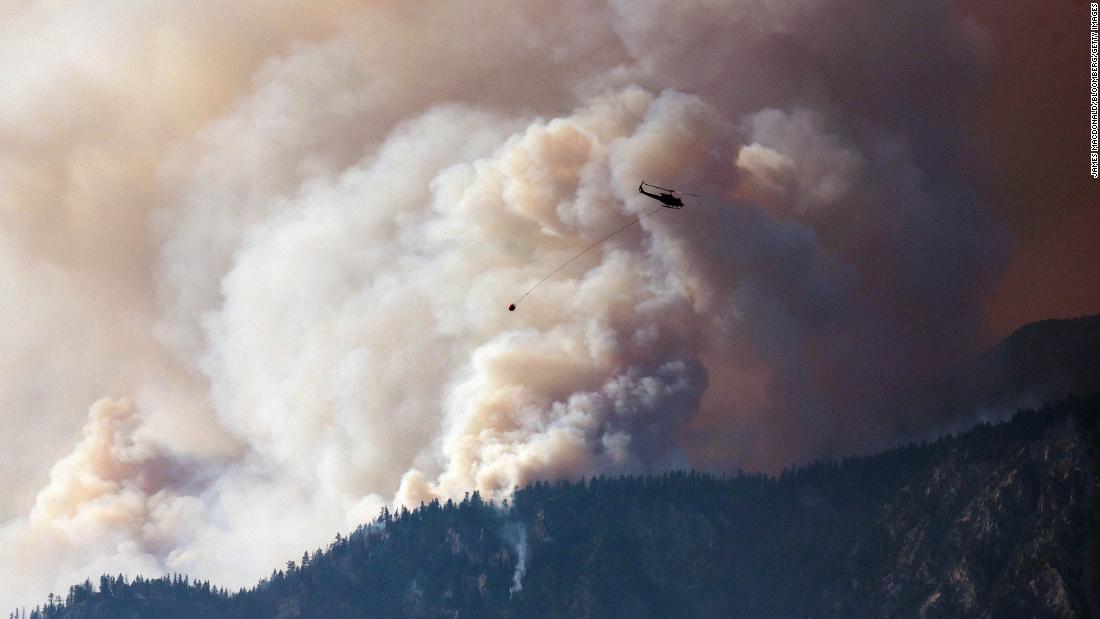 A helicopter prepares to make a water drop as smoke billows along the Fraser River Valley near Lytton, British Columbia, Canada, on Friday, July 2, 2021.Heatwaves and droughts are also making new areas vulnerable to fires.”In the Siberian Arctic, we’re concerned about the tundra ecosystem to the north of the forest, this would normally be too wet or frozen to burn,” Smith said. “In the last two years we saw a lot of fires in this ecosystem, which suggests that things are changing there.”That also has a serious, long-term effect on climate. The ash from fires could also accelerate global warming by darkening surfaces that would normally be lighter in color and would reflect more solar radiation.Areas affected by these fires also include peatlands, which are some of the most effective carbon sinks on the planet, Parrington said.


“If they’re burning, then it’s releasing carbon,” Parrington said. “It’s removing a carbon storage system that’s been there for thousands of years and so there’s potentially a knock-on impact from that.”

Re: Wildfires have erupted across the globe, scorching places that rarely burned before Fri Jul 23, 2021 9:51 am

OUT OF MIND » CHANGING ENVIRONMENT & NATURE » EARTH CHANGES » Wildfires have erupted across the globe, scorching places that rarely burned before