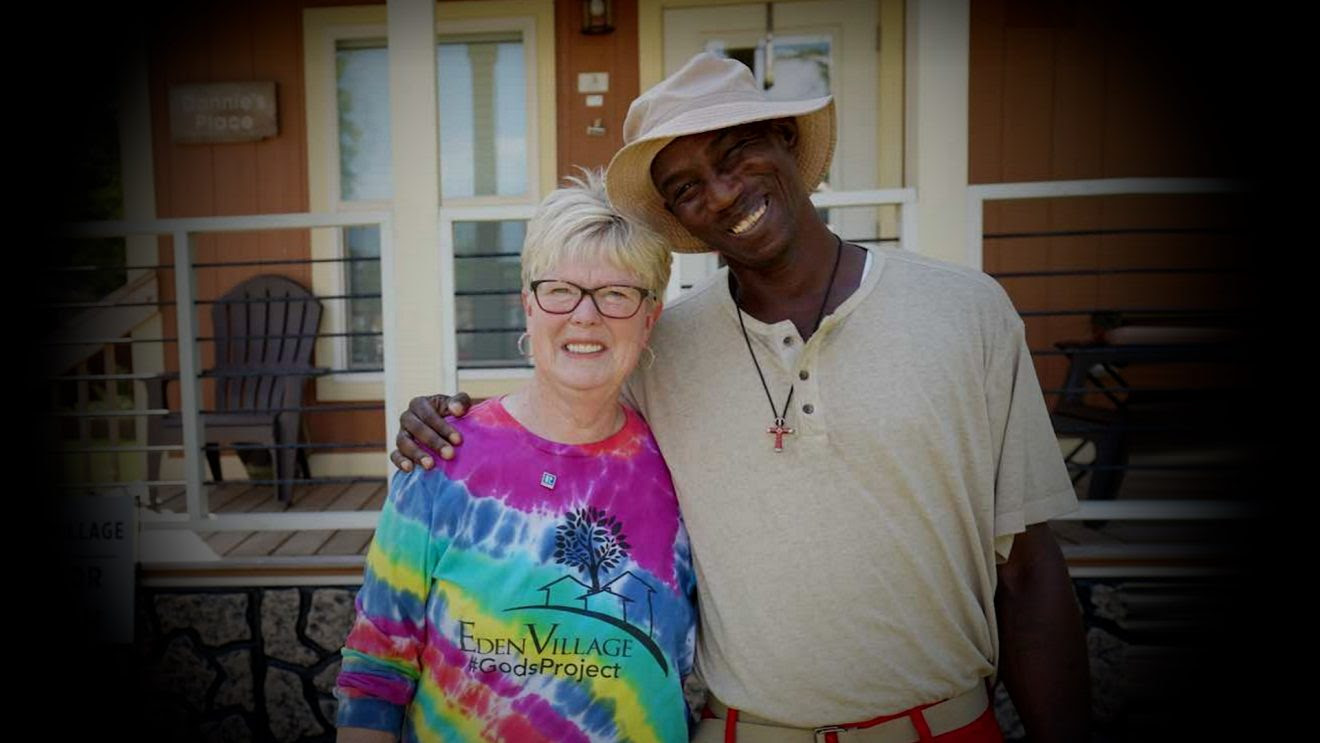 A realtor in Missouri is determined to make her hometown “a city where no one sleeps outside.”
For nine years Linda Brown and her husband David organized a nightly drop-in shelter where homeless people in Springfield could eat, shower, do laundry, use a computer, and socialize during bingo games and karaoke—but they wanted to do more.
So they transformed an abandoned mobile home property into a village of tiny homes that provides permanent housing to the chronically disabled homeless.
They raised $4.75 million and opened Eden Village in 2018, erecting 31 tiny homes that are now occupied by people like Jonathan Fisher. He was battling substance abuse, and had lived on the streets for two years when he met Linda Brown, who changed his life.
“In the worst moments of my life, Linda gave me guidance, care, and made me feel like I was still worth something,” Fisher says. He says that Brown took the time to learn about how he became homeless, and then encouraged him as he rebuilt his life. She even offered him a job.
Now sober, Fisher works full-time for Brown, doing construction and maintenance on the 31 homes, and helping others experiencing struggles similar to what he went through.
The driving philosophy behind Eden Village is the same that fuels the Housing First movement: The root causes of a person’s homelessness cannot be thoroughly addressed until his or her immediate housing needs are met.
“I watched as my (homeless) friends walked off into the darkness to a hidden, wet, cold camp while we went home to a warm bed,” Linda told the National Association of Realtors, who honored her with their Good Neighbor Award in 2020. “I had to do something,”
That was the moment that formed her vision for the tiny-home village that serves as a place where the chronically disabled homeless “can live with dignity and self-worth.”
Changing Lives, One Village at a Time
After drawing sponsorship money from Coldwell Banker, the Greater Springfield Board of Realtors, local banks, churches, and area residents, by February 2019, all 31 tiny homes, which cost about $42,000 each, were occupied. 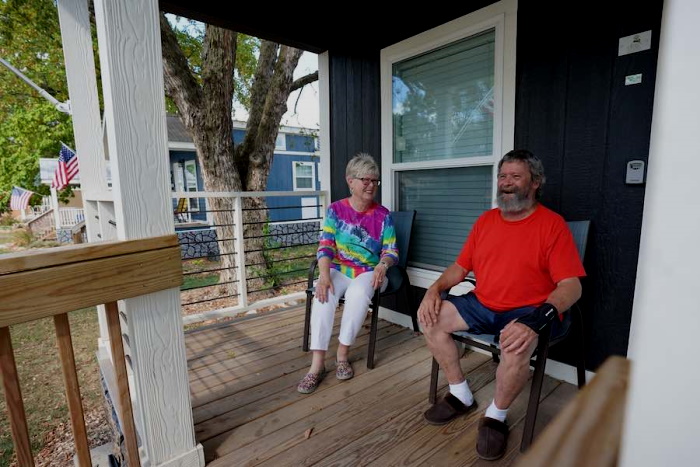 Linda Brown
“It takes someone who wants to do something, and then believes they can. I’ve watched Linda Brown live that out,” says Nate Schleuter, who helped launch a tiny-home village for the homeless in Austin, Texas, but now is the chief visionary officer for Eden Village.
“It’s exciting to watch the homeless who thought they’d live the rest of their life on the street now have a home.” 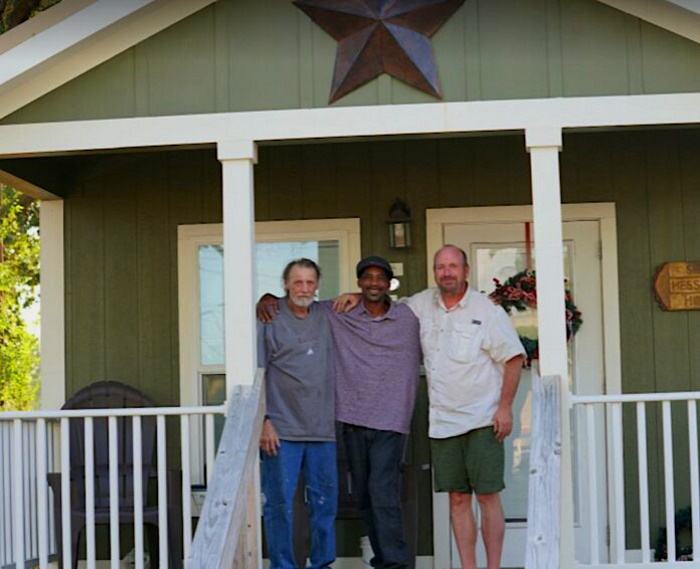 Eden Village, courtesy of Linda Brown
Brown’s 13 years of real estate expertise has been essential to the development of the tiny-home community. She learned of a listing for an abandoned 4.2-acre mobile park on Springfield’s east side. The property wouldn’t need to be rezoned for tiny-home trailers, and the infrastructure and utilities were already in place.
The tiny homes are rolled in on wheels attached to their steel frames, qualifying them as recreational vehicles. The 400-square-foot individual homes are fully furnished, including dishes and bedding. Residents pay $300 per month, which includes utilities. Most receive government disability checks of $725 per month to cover expenses. They can remain in their home as long as they wish, provided they remain a good neighbor in the community. 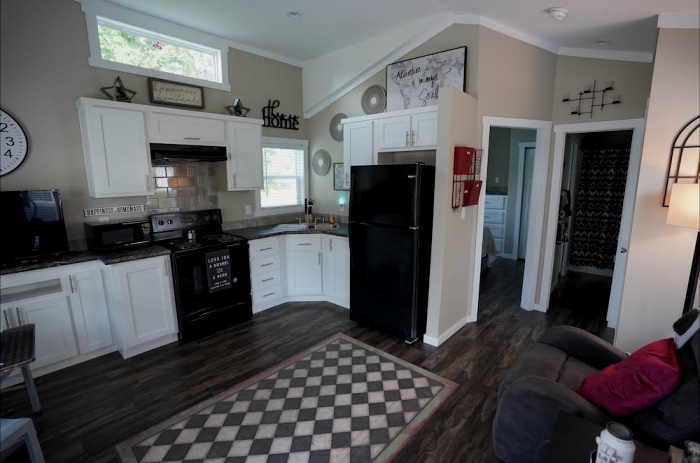 Wide-angle photo of interior of tiny home – courtesy of Linda Brown
The village includes a 4,000-square-foot community center where residents can hold cookouts, do laundry, and access a medical office staffed with student nurse volunteers and mental health professionals. Eden Village was even the site of a marriage ceremony for two residents.

Linda Brown with Eden Village resident
Plans for additional villages are already underway on donated land. Eden Village 2 will house 24 residents in tiny homes and is close to opening.
Then, work will begin on Eden Village 3, which could house up to 80 residents in duplexes. Over the next six years, Brown, who is a realtor for Amax Real Estate, plans to have five villages across Springfield, housing an estimated 200 homeless people.
Fisher says Brown’s devotion helped him emerge from the grip of homelessness. “She helped me to build a better life,” Fisher says. “Even when I was struggling with homelessness and sobriety, she showed me I was valuable and that my potential shouldn’t be wasted. She made me feel like I belonged somewhere.”
Other cities are seeking to duplicate Eden Village. One project is underway in Wilmington, N.C., and 34 other communities are making plans. You can visit the Eden Village website to donate to the 501(C-3) nonprofit or volunteer with them.

» EERIE Abandoned "UFO Villages" Discovered
» She transforms old city buses into showers for the homeless
» Reno: Chronic Pain, Chronic Illness, Chronic Injuries: Osteopathic Medicine
» Over 200 Homeless Seniors Will Have Their Own Tiny Houses After Donations Pour In
» Musician Builds Tiny Homes for the Homeless — City Promptly Seizes and Destroys Them