OUT OF MIND » BREAKING NEWS & HOT TOPICS » THE GREAT DIE OFF » CNN: ‘Segregate the Great Unvaccinated – Make Them Pay’

Source:
CNN is now calling for unvaccinated to be severely punished and physically segregated from the rest of society for the crime of refusing to go along with the crowd.
The far-left Democratic propaganda network continued its wall to wall broadcasts last week calling for unvaccinated people to be made to pay a harsh price for refusing the Covid shot.
First up was CNN’s resident medical health “expert” Dr. Leana Wen who demanded vaccine passports and mask manadates forever.
“I think it depends on the circumstance,” Wen said. “So if you’re going to the grocery store, and the grocery store doesn’t have the capacity to enforce some kind of proof of vaccination, then they have to say that indoor masking needs to apply, because we don’t know who’s vaccinated and who’s not.”
“The same thing for schools,” Wen continued. “Schools, you can’t expect the teacher in every school to be asking ‘well you’re not wearing a mask so are you vaccinated or not?’ And so that’s the case, everyone should be wearing masks.”
“But I can imagine there are already concert venues or workplaces that are saying ‘if you are not vaccinated, you can’t come, or you have to get a negative test.’ And that’s what’s needed in order to really incentivize vaccines at this point,” Wen added. 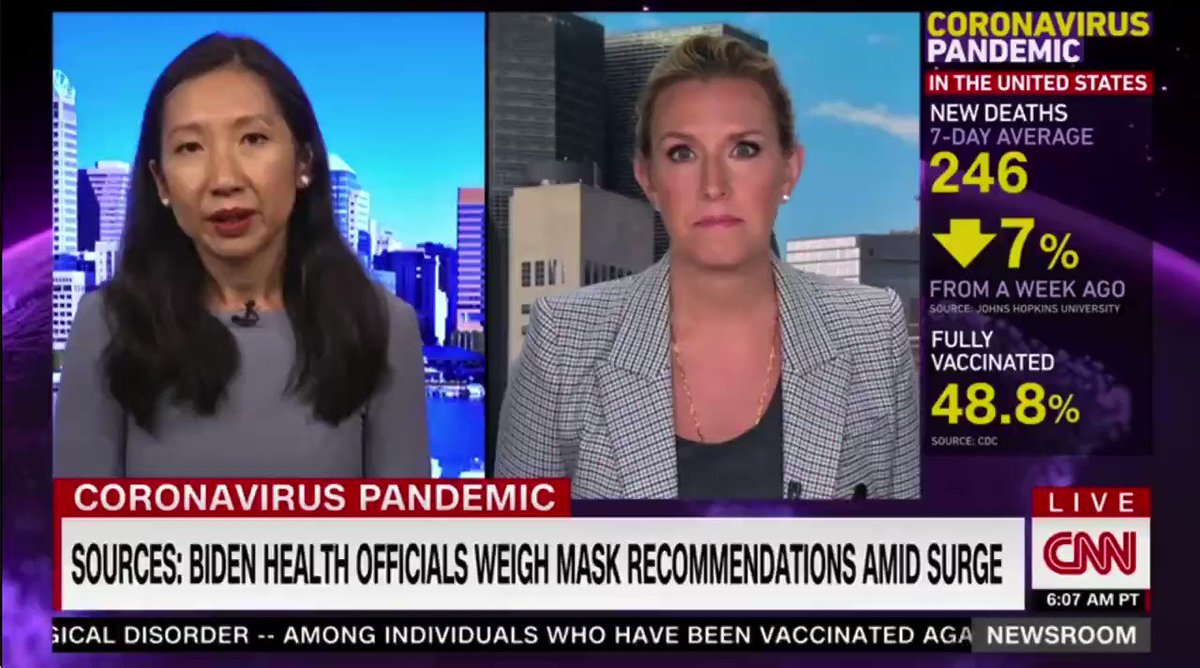 Summit.news reports: Wen previously suggested that life should be made as difficult as possible for those who are still opting not to take the shots, and that Americans should be banned from engaging in social events and forced to undergo PCR tests twice a week if they want to stay unvaccinated. She also previously advocated directly linking the amount of freedom Americans should be allowed to their vaccination status.
Next up on CNN, which should probably be renamed VNN, was Former White House senior COVID-19 adviser Andy Slavitt who proclaimed that the Biden administration should become “very aggressive” and force unvaccinated workers and students to take daily tests and to cover the costs themselves.
“We should be really seriously considering whether schools, workplaces, government agencies ought to be saying, ‘Hey, if you’re coming here, you need to be vaccinated. If you’re not, you need to show you have a negative test every single day,” Slavitt declared. https://content.jwplatform.com/players/mo1DENfe-o73dHpYz.html
He continued, “Look, if people say they don’t want to be vaccinated, which some people might say, I think it’s perfectly reasonable to say that’s fine. We want you to show up every morning an hour before work and get a negative test. Maybe even at your own expense. Until the point where people will say, you know what? It makes more sense to actually get vaccinated. If you give people that option, I think you’re going to see more and more people take the option to get vaccinated.”
“Option.” Right.
In other words, force people to take vaccines by crippling them financially and ostracising them from society.
The latest VNN ravings come on the heels of a leaked internal email from CNN’s Washington bureau chief complaining that the “carrot” is no longer working in terms of convincing Americans to get vaccinated and that authorities need to start using the “stick.”

OUT OF MIND » BREAKING NEWS & HOT TOPICS » THE GREAT DIE OFF » CNN: ‘Segregate the Great Unvaccinated – Make Them Pay’

» CNN: Segregate Unvaccinated, Make Them Pay For Daily Tests
» Must We Segregate the Unvaccinated from the Vaccinated?
» The Great Reset Demands Firing All Unvaccinated Employees
» Make America Great Again - Legalizing Cannabis Will Do That
» Drain The Vatican Swamp: Make Humans Great Again