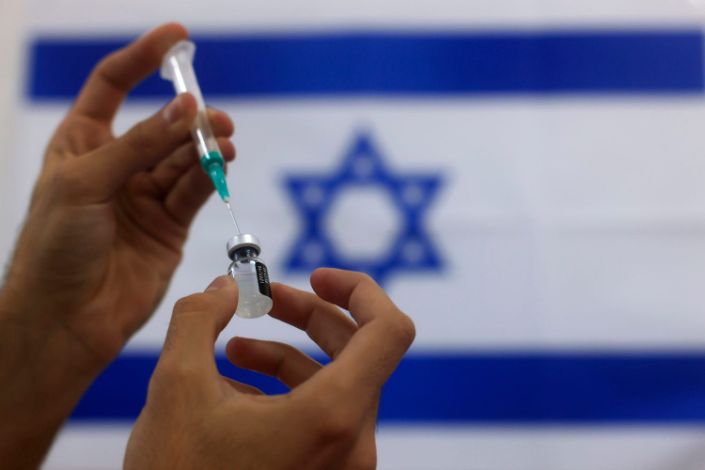 Comments by Brian Shilhavy
Editor, Health Impact News
Pfizer continued their program of using Israelis as lab rats this week as Israel became the first country in the world to authorize a third COVID-19 “vaccine” for those who have already received two Pfizer mRNA shots, beginning with people over the age of 60.
ZeroHedge News reports:

In what’s a likely sign of things to come elsewhere, Israel is now pushing a third jab, or follow-up booster for those who’ve already received their two vaccine rounds, for the elderly people over the age of 60.
Israel’s prominent Haaretz newspaper revealed Thursday the country will be the first in the world to start doing so after government approval, writing that Israel “will start offering a third COVID vaccine shot to people over 60 starting on Sunday, after the Health Ministry approved the move on Thursday.”
“The booster shots will be given to those over 60 who received their second dose at least five months ago. Israel is the first country to announce that it will begin giving booster shots,” the report says.
Israeli President Naftali Bennet unveiled the plan to the nation in a televised address:


“I’m announcing this evening the beginning of the campaign to receive the booster vaccine, the third vaccine,” Bennett said.
“Reality proves the vaccines are safe. Reality also proves the vaccines protects from severe morbidity and death. And like the flu vaccine that needs to be renewed from time to time, it is the same in this case.”

Read the full article at ZeroHedge News.
Earlier this year Vera Sharav, a holocaust survivor, reported how the Israeli government had reached an agreement with Pfizer to vaccinate as many people in Israel as quickly as possible and monitor the results, selling out their citizens as “lab rats.”
See our previous coverage on this issue:

It appears that now the Israeli people will also be the first to be tested with a third injection, as Israeli President Naftali Bennet confirmed what most of us expected: there will be constant COVID-19 booster shots just like the annual flu shots.
Mordechai Sones, with America’s Frontline Doctors, interviewed security expert Ehden Biber this week who claims to have recovered unredacted contracts between Pfizer and world governments which he claims required these countries to ban or make illegal existing treatments for COVID-19, such as Ivermectin, to be able to distribute Pfizer mRNA COVID-19 injections.

“If you were wondering why Ivermectin was suppressed, it is because the agreement that countries had with Pfizer does not allow them to escape their contract, which states that even if a drug will be found to treat COVID-19, the contract cannot be voided.”

Unredacted contracts for the experimental biological agent known as the “COVID-19 vaccine” between the Pfizer corporation and various governments continue to be revealed.
Information security expert Ehden Biber told America’s Frontline Doctors (AFLDS) Frontline News that the first document to recently emerge was discovered by Albanian newspaper Gogo.al.  Biber then was able to locate the digitally-signed Brazilian contract, and at least two others, one with the European Commission, and the other with the Dominican Republic.
AFLDS Chief Science Officer Dr. Michael Yeadon responded to the revelations after perusing the Albania contract, saying it “looks genuine.” He continued: “I know the basic anatomy of these agreements and nothing is missing that I’d expect to be present, and I’ve seen no clues that suggests it’s fake.”
Yeadon noted what he found “the most stunning revelation,” citing the clause that stipulates “if there are any laws or regulations in your country under which Pfizer could be prosecuted, you agree to CHANGE THE LAW OR REGULATION to close that off.” (emphasis his)
In a Twitter thread that has since been removed except the first tweet in the thread, Biber explained the significance of the revealed agreements: “Because the cost of developing contracts is very high and time consuming (legal review cycles), Pfizer, like all corporations, develop a standardized agreement template and use these agreements with relatively minor adjustments in different countries.
“These agreements are confidential, but luckily one country did not protect the contract document well enough, so I managed to get a hold of a copy.
“As you are about to see, there is a good reason why Pfizer was fighting to hide the details of these contracts.”

Read the full article at America’s Frontline Doctors.
Comment on this article at HealthImpactNews.com.

» Most Vaccinated Country on Earth Closes Schools and Sports as COVID Cases Surge — 35% of New Cases Are Fully Vaccinated Residents
» ” 85% of new COVID Delta infections in Israel are fully vaccinated” … A Catastrophe Unveils Itself
» “The COVID shot is a normal vaccine. The COVID shot is safe. These injuries and deaths are normal.”
» Wall Street Journal Provides Troubling Proof Suggesting COVID Vaccines ‘May be’ Causing COVID Variants to Evolve In The Vaccinated
» UNITED AUSTRALIA PARTY VOWS TO TAKE BACK COUNTRY - PROOF: VACCINATED DYING OF BLOOD CLOTS