Patrick King vs The Crown 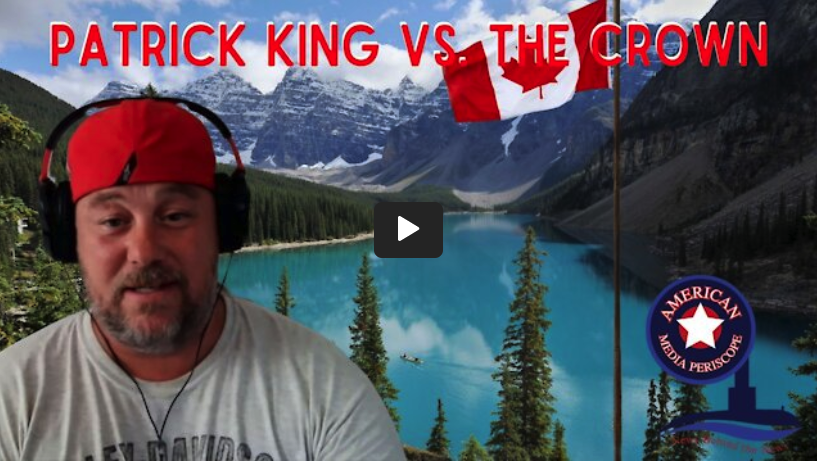 Patrick King vs The Crown

Patrick King in Alberta, Canada is a freedom-fighting role model for all of us. He joined AMP’s Making Sense of the Madness, where I do a segment every Thursday and I was left very inspired!
Patrick gives us a step-by-step on how he was instrumental in getting the Province of Alberta to remove all COVID restrictions, making Alberta the freest province in Canada and a world leader in ending these criminal mandates.
After he received a $1,200 fine for not social distancing in a group of more than 10 people, he decided to fight the ticket and to represent himself in criminal court, demanding that the Canadian government show proof that the SARS-CoV-2 virus has ever been isolated and that COVID-19 is real.
In Canada, when you appear before the court pro se, it puts the judge in a position where they have to advocate for you and to direct you in your litigation. His judge directed him to subpoena Alberta’s Chief Medical Officer of Health, Deena Hinshaw so that he could address and cross-examine his accuser.
At the next hearing, the Crown Prosecutor (the equivalent of a Federal Prosecutor) held up a copy of the document drawn up by Hinshaw, in which she enacted the COVID pandemic in Canada with the words, “I Deena Hinshaw formulate this Public Health Act under the COVID-19 pandemic.”
Patrick objected, arguing that this was a piece of paper and that he had the right to address the actual person who had formulated the Public Health Act. The judge agreed.
Under the direction of the judge, he then filed a subpoena for Deena Hinshaw in which he requested from her: “…all white papers describing the isolation of COVID-19, also known as SARS-CoV-2 virus in human beings, directly from a sample taken from a diseased patient, where the patient’s sample was not first combined with any other source of genetic material.
“I am not requesting white papers, where isolation of SARS-CoV-2 refers to the culturing of something in a lab, the performance of an amplification test,” – or PCR test – which is being phased out, due to millions of false positives…
“To clarify, I am requesting, via disclosure, all white papers showing isolation of the SARS-CoV-2 virus in human beings in your possession or in the possession of Alberta Health Ministry, as these white papers would have been integral in the crafting of the statutes, under the Public Health Act, here in Alberta.”
Patrick says this resulted in his being subpoenaed to appear in private chambers in less than 24 hours. When he appeared, he informed the judge this was a Procedural Violation, as one cannot be subpoenaed with less than 24-hour notice. The judge agreed.
He discovered the judge had misled him by having a Justice of the Peace subpoena Hinshaw when he was met with a Jurisdictional Challenge, because a Justice of the Peace does not have this authority. Then the judge moved to quash his subpoena – but not before he made her state her reasons for doing so.
He says, “She openly stated on the document that the Chief Medical Officer of Health does not have the material evidence Mr King is even requesting, which means they don’t have in their possession the isolation of the SARS-CoV-2 virus, which would have been the major backing behind their Public Health Act.”
At the subsequent hearing, he was informed that two Attorney General Prosecutors from Ottawa, the Canadian capital would appear. His case had now become “Her Majesty the Queen vs Patrick King.”
They got him on the Jurisdictional Challenge and he was unable to subpoena Deena Hinshaw – and he had to pay for his ticket – but what he was able to do was to tell the judge, “Your Honor, for and on the record, the Chief Medical Officer of Health of Alberta does not have the material evidence I am requesting and she says, ‘Yes, Mr King. You’re absolutely correct. They do not have the evidence you’re requesting.’ And that is in the transcript.”
He says, “Now, it’s not a coincidence that right after my court case, that the Alberta Ministry of Health drops all COVID mandates…They drop quarantine restrictions, they drop traveling restrictions, they drop mask mandates, they drop the jab restrictions, so no kids have to get the jabs anymore.”
Ezra Levant’s Rebel News, a Conservative Canadian news outlet that one might expect to be supporting Patrick is trying to deny that his case affected Hinshaw’s decision to drop the COVID mandates but the timeline of events seems pretty clear:

***
I then did my segment, in which I discussed some jaw-dropping stories which could get memory-holed, given the extraordinary times we’re in.
ASHLI BABBITT’s FINGERPRINTS SENT TO CHINESE WEB DOMAIN
The first was the announcement by Judicial Watch that via a FOIA request, they received 1,160 pages of documents from Washington, DC’s Office of the Chief Medical Examiner related to Ashli Babbitt, which reveal that “the Chief Medical Examiner submitted a request for permission to cremate Babbitt only two days after taking custody of her body and that due to the high profile nature of Babbitt’s case, Deputy Chief Medical Examiner Francisco Diaz requested that a secure electronic file with limited access be created for Babbitt’s records.”
A very odd find was that Chief Medical Examiner official, Jamie Spann emailed a scanned file from the FBI, with Ashli Babbitt’s fingerprints to Grant Greenwalt, Manager of the Crime Scenes Sciences unit of the DC Department of Forensic Sciences, asking him to run the prints. Greenwalt, in turn forwarded the request to David Chumbley, a DC Police Department officer, who in turn forwarded the prints from his iPhone to someone identified as Jamese Kororma (which appears to be a fake name) within the DC government.
This email sent to “Jamese Kororma” resulted in multiple bounced emails returned with “undeliverable” messages in Chinese!
Why on Earth would a DC cop be forwarding a request to scan Ashli Babbitt’s fingerprints to somebody in China? Is the CCP also bribing DC Police officers?
TWITTER ALLOWS GOVERNMENT ENTITIES TO DELETE OTHERS’ TWEETS
The next story, in what’s being described as a discovery as momentous as the Pentagon Papers, MIT professor and onetime Massachusetts Senator candidate, Dr Shiva Ayyadurai was able to uncover Twitter’s “partner support portal,” that is offered to certain governmental entities so that they can flag and delete content they dislike.
Dr Shiva had stumbled upon this after his tweets, alleging voter fraud during his campaign had been deleted at the direction of government employees of the Massachusetts Secretary of State’s office!
Dr Shiva then filed a federal lawsuit, alleging that the government silenced his political speech in order to affect an election. The case will hinge on the degree of interaction between Twitter and the state government of Massachusetts and some legal experts believe that this case could spell the end of Section 230 protections for the social media giants.
RAISING ARIZONA
And for those wondering what’s going on with the Arizona election audit, I discuss the interview between Arizona State Senator, Wendy Rogers and Stew Peters, who has called to de-certify the 2020 Election, based on the egregious anomalies so far discovered in the audit, such as:

Rogers has called for the arrest of the Maricopa County Supervisors, who have not complied with the subpoena to provide the passwords to the Dominion machines and she has forwarded their infractions to the Arizona Attorney General. If they are found to be non-compliant, Maricopa County will be docked some $63 million in the State’s revenue share.
She says it is the Arizona State Legislature – not Governor Doug Doucey – that has the authority to de-certify, he actually has no role in signing-off on it. However, they cannot vote on de-certification until the legislature is back in session next January.
In the meantime, she says that as the Vice-Chairman of the Judiciary Committee, she can follow the processes and accept and integrate the information that they get from the audit.
She says once the audit team is done analyzing the data, which is expected in about 2 weeks, all of their processes can then be replicated in Pennsylvania, Wisconsin, Michigan, Georgia – and in any other jurisdiction where Dominion machines were used.
And the rest is history.